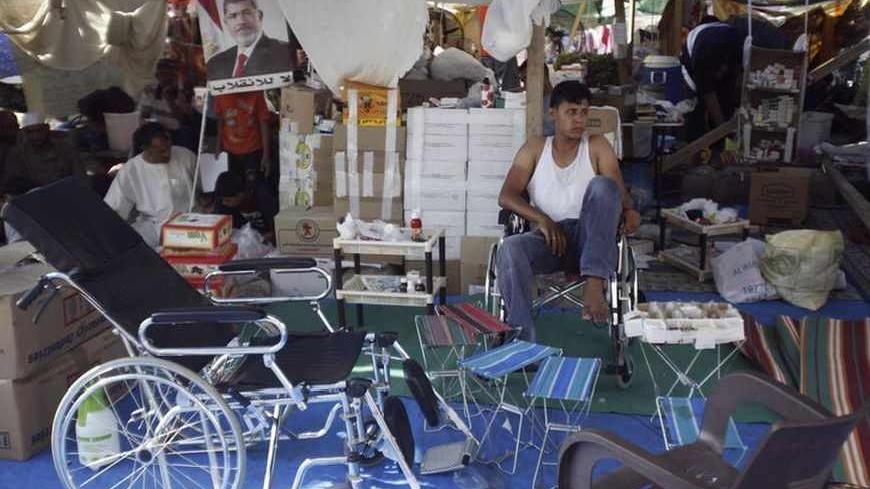 A member of the Muslim Brotherhood and supporter of deposed Egyptian President Mohammed Morsi rests at a field hospital in Rabia al-Adawiya Square, where they are camping, in Nasr City, east of Cairo, Aug. 7, 2013. - REUTERS/Amr Abdallah Dalsh

Muslim Brotherhood supporters around the world are still in shock after a military coup in Egypt ousted the first Muslim Brotherhood president of the largest Arab country. One month after the group’s brief political experience in governance was brought to an end, the Brotherhood’s leadership and base have still not awoken from their stupor.

Al-Monitor obtained a copy of the group’s first internal analysis document, which the Brotherhood began to circulate in recent days. The document was written by 75-year-old Mohammed Ahmed Rashed, an Iraqi national who is considered the group’s top planner and theorist. Although he occupies no official post in the organization, Brotherhood members place him alongside Sheikh Yusuf al-Qaradawi, the Brotherhood’s spiritual father and reference. Rashed is also perhaps on par with Mohammed Badie, the organization’s supreme guide.

Rashed has put together an organizational document titled The Return from Freedom. The document is 37 pages long and divided into three sections: identifying the parties involved in the coup; the Muslim Brotherhood’s role in overcoming this historic ordeal; and, a list of the most important benefits that may be gleaned from the current situation, despite its difficulty.

The document characterizes the current situation in Egypt as the ugliest military coup in modern history due to its bloody methods. At the same time, the document considers the coup the beginning of uniting the Islamic nation under a wise leadership. The document argues that the sit-ins taking place throughout Egypt are bound to change the equation and cancel the military’s advantage. On page eight, Rashed writes, “If free elections without rigging are held, the majority will become inclined toward legitimacy and freedom, and President Mohammed Morsi would come back to power.”

Rashed accuses the United States of supporting the coup to frustrate Islamic ambitions by using the Egyptian army. He points to the involvement of a number of Egyptian leaders in the coup, such as Mohamed ElBaradei and Hamdeen Sabahi, who have strong relationships with the United States and are an important part of its plans in the Middle East.

Page 10 of the document says, "[There is] disappointment with President Barack Obama, who we thought was wiser than his predecessors and would bring freedom to our country, since he is more intellectual than his predecessor, George W. Bush, and tends to be [more] realistic and principled. By supporting the coup in Egypt, he proves to be concerned about interests rather than moral obligation, and subject to pressure by the Zionist lobby, which believes this coup serves the security of Israel."

Rashed points to the role of the “deep state” and the pervasive influence of former President Hosni Mubarak’s followers and loyalists, who have frustrated every reform that President Morsi wished to implement.

He also accuses Israel of accelerating the end of Morsi’s rule by playing a major role in planning the coup and in supporting the Egyptian army, with the help of money from the Gulf, particularly Saudi Arabia and the UAE. He said that those two countries have spent money to tarnish Morsi’s image. On page 17, Rashed notes, "The Suez Canal draft project, which President Morsi listed as a priority in his development plan, was expected to bring $100 billion in annual returns for Egypt and generate millions of jobs for Egyptians. However, the UAE felt that this project would deal a blow to the Jebel Ali Free Zone in Dubai, and thus defended itself by overthrowing Morsi. The revolutionaries issued a decision canceling the Suez Canal project only one week after the coup.”

Rashed also accuses Iran of being one of the hidden hands behind the coup. He accuses Iran of mobilizing Arab Shiites against Morsi because of his stand on the Syrian issue and his blocking of Iranian attempts to infiltrate Egypt. On page 20, he provides information published for the first time saying, "Iran offered to support Morsi’s development plan with $30 billion should he give them [control over] the Shiite shrines and monuments of Egypt, so they would turn them into mausoleums and launchpads for spreading Shiism. They also offered to guarantee 5 million Iranian and Arab Shiite visitors [to Egypt] to double the returns of Egyptian tourism. However, Morsi declined the offer, and thus Iran has made ​​every effort to back the coup.”

Rashed then proposes ideas as to what the Muslim Brotherhood should do after the coup. He believes it is important to continue the sit-ins and maintain their peaceful nature even though hundreds have been killed. He accuses the Egyptian military of trying to drag the Brotherhood into committing violence.

Rashed then lists the benefits that the Muslim Brotherhood can glean from the coup, such as winning the sympathy of Egyptians, Arabs and Muslims. The coup also produced a historic opportunity to mobilize Muslim potential, which is supported by the values ​​of “giving, sacrifice, patience and fortitude” and includes the potential of women in the organization. The document concludes by saying: After the coup, Egypt has become the cause of the entire Islamic nation — a victory for the Islamists is the key for subsequent victories in all Arab countries.

It is important to note Rashed’s great influence on the Muslim Brotherhood masses. They eagerly await his writings. They consider him a visionary who can diagnose problems accurately, someone with the wisdom to issue recommendations for decision-makers and someone who has a way with words that attracts the ordinary Islamist reader.

The Muslim Brotherhood leadership needs such an internal organizational document more than ever because it can give guidance to a group licking its wounds and trying to assess its strengths in Egyptian society. The document comes at a time when the coup nearly ended what was left of the group. Over the past month, the Brotherhood base remained without a formal story that explained what happened, why Morsi collapsed so quickly and whether he can return to his presidential post.

But the answers will not be direct because the Brotherhood has been busy blaming other parties for the coup, adopting a conspiracy theory explanation that is popular with many of its supporters. It seems as if Rashed has not found a single mistake committed by Morsi — whom he strangely described as a “Quranic president” — for the year he was in office.

Although the hands that contributed to the coup’s success had interests and goals, one cannot, under any circumstance, consider all those who demonstrated on June 30 as a “mob, criminal gang and drug mafia,” as the document says. This attitude ignores that Morsi has Egyptian nationalist opponents who are not associated with external agendas and who participated in the demonstrations calling for his removal.

While Islamists complain that their opponents distort the group’s image in the media, Rashed does the same in his document. He denies that the Brotherhood has a legitimate opposition in Egypt and accuses all its opponents of being either internal conspirators or part of an externally funded conspiracy.

Another point that jumps to mind when one critically reads Rashed’s document is the optimism with which he portrays the future of Egyptian events. This is inconsistent with his prediction that the coup will succeed for some time. While the Muslim Brotherhood masses are accustomed to this kind of excessive religious rhetoric, it could prevent them from waking up from to the historic shock and may give them unrealistic hopes, because the coup — despite its stumbling — is slowly entrenching itself step by step.

Perhaps the document’s biggest weakness is that it doesn’t describe the coup as being about politics and partisanship, but rather portrays it as a decisive battle between Islam and apostasy, right and wrong. Before the coup, the Islamists were close to abandoning that kind of thinking and had moved closer to addressing their political differences within the logic of mutual interests, but the massive number of people who participated in the protests to remove Morsi from power has made the Islamists revert to the “Islam versus apostasy” mantra.

Finally, it is clear that this is a rallying organizational document for the Muslim Brotherhood that is trying to save the group from its overwhelming historic crisis. The document may lift the Brotherhood’s morale, but it lacks political realism and makes no effort to intellectually and politically scrutinize Morsi’s governing experience, which lasted a whole year.

So the Muslim Brotherhood is repeating its discourse of past decades. The Brotherhood complains about being targeted by Arab authorities, but doesn’t identify the internal factors or people responsible for the group's dead end. If the Egyptian coup ends up succeeding, it may tempt other Arab regimes to use the big stick in dealing with Islamists in their own countries.