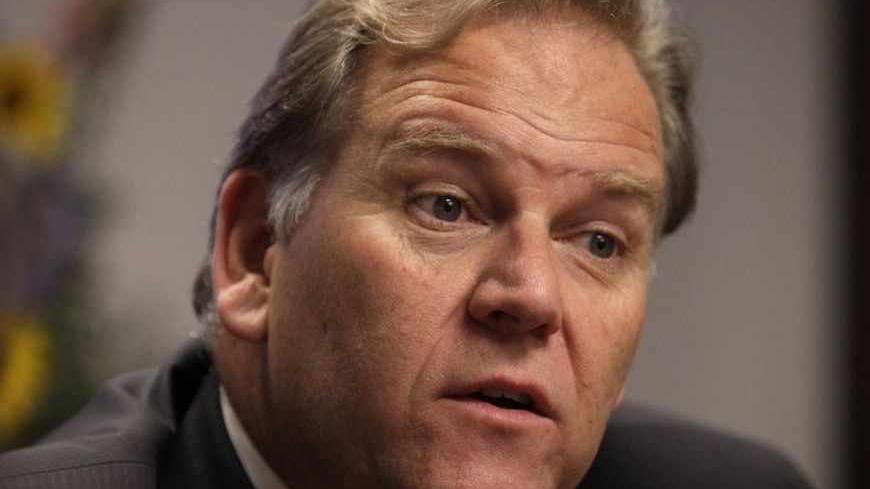 Chairman of the House Permanent Select Committee on Intelligence Mike Rogers speaks at the Reuters Cybersecurity Summit in Washington, May 15, 2013. - REUTERS/Yuri Gripas

Mike Rogers, chairman of the House Permanent Select Committee on Intelligence, does “not hold out a lot of hope” that there will be any change in Iranian behavior under incoming President Hassan Rouhani.

“Iran is still moving forward on its nuclear program, it is still the largest state sponsor of terrorism in the world,” said Rogers, in an exclusive telephone interview with Al-Monitor.

Rogers, who has represented Michigan’s 8th district since 2001, was a co-sponsor of the Nuclear Iran Prevention Act, passed by the House with a 400-20 vote on July 31, which imposes tough additional sanctions on Iran.

“Sanctions are incredibly important to continue to send a message that the pursuit of the nuclear program will only cause them pain,” said Rogers, who has earned a reputation in Congress for his bipartisan leadership on national security issues.

“One always hopes for a diplomatic solution. They have shown no interest despite all the other sanctions in actually moving forward with real negotiations about their nuclear program. We have seen only an escalation in their activities in Syria in a way that is not beneficial,” he said.

Asked about those who have been encouraged that the election of Rouhani may signal a possible shift to more moderate policies by Iran, Rogers said, “I think there is a lot more marketing going on than there is reality in his position on Iran’s negotiations on Iran’s nuclear program.”

Rogers said that Iran can prove its moderation by coming forward with a new proposal in the nuclear talks, including “complete cessation of their nuclear program, opening up all of their facilities.”

“That would send a very clear message that they are not pursuing their nuclear program in the way that they are today,” he added.

Rogers, whose committee has oversight of US intelligence agencies which so far have the lead in US support for Syrian rebel forces, released a statement on July 22 noting, “The House Intelligence Committee has very strong concerns about the strength of the administration's plans in Syria and its chances for success. After much discussion and review, we got a consensus that we could move forward with what the administration's plans and intentions are in Syria consistent with committee reservations.”

The Republican chairman blamed US President Barack Obama for not clarifying US objectives and interests.

“Part of the problem here is that our commander-in-chief, the president of the United States, has not talked to the American people about a way forward in Syria,” he said.

“I think it would be incredibly important for the president to lead on this and lay out an agenda, identify what our national security interests are in Syria before we move forward.”

“I don’t have hopes that that is going to happen,” he added.

Rogers, who is a co-sponsor of the Free Syria Act sponsored by US Rep. Eliot Engel, noted the immense challenges for the United States, including that “you have now every type of terrorist that you can imagine now acting in Syria.”

“You could not draw up a more difficult scenario to try and solve than we have today,” he added.

Rogers argued that American leadership on Syria is essential.

“I think that we could have avoided much of this problem by using US influence and soft power in a way that does not involve boots on the ground, but involves unique US capabilities, US leadership and intelligence packages that could have helped the secular oppositionists to be in a position of strength going into what will eventually be the fall of [Syrian President Bashar] Assad. It is just a matter of when that happens,” he said.

Rogers expressed support for US Secretary of State John Kerry’s efforts, working with Russia and the United Nations, to convene the Geneva Conference on Syria, adding, “I also think that we should have a parallel strategy that helps shape what happens there in a way that is consistent with US national security interests.”

On Egypt, Rogers said, “I do agree with the fact that we ought to continue to support the military as that one stable institution in Egypt that will bring about democracy, that is far more representative of the hopes and aspirations of Egyptians than what we found in the Muslim Brotherhood.”