The reaction of Finance Minister Yair Lapid to the fiasco surrounding the appointment of a new governor of the Bank of Israel appears to show his inability to accept criticism. 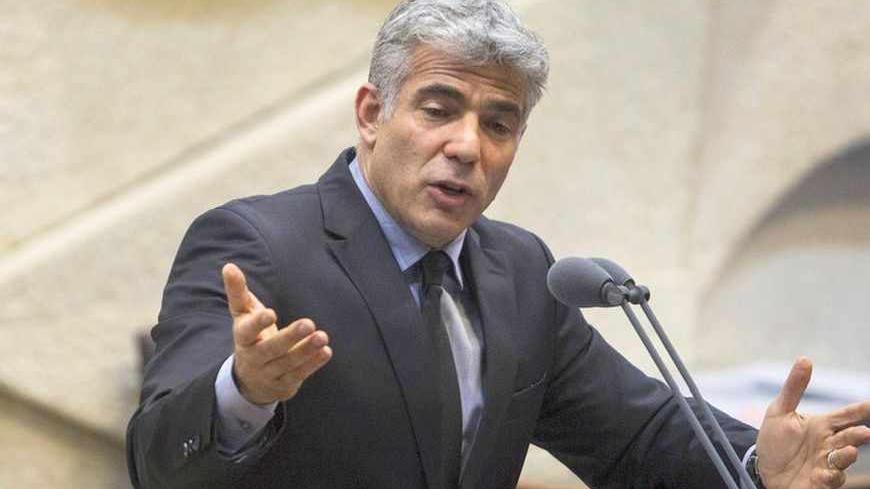 Israel's Finance Minister Yair Lapid gestures as he speaks during the opening of the summer session of the Knesset, the Israeli parliament, in Jerusalem, April 22, 2013. - REUTERS/Baz Ratner

If there’s one thing that unites politicians from across the political spectrum, it is their unwillingness and inability to admit mistakes and apologize. Finance Minister Yair Lapid is no different, but as someone who took the political arena by storm, promising a “new kind of politics,” expectations of him were much higher and the disappointment in him was much greater. The finance minister and chairman of the Yesh Atid party could have walked away from the embarrassment surrounding the appointment of a new governor of the Bank of Israel with his dignity intact. All he had to do was to work up the courage to get up before the public and apologize for his failure.

While it is true that the prime minister is also involved in this fiasco, it is Lapid who disappointed the public more than anyone. No one expected him to engage in such a shallow and amateurish process when selecting the person to fill one of the most important posts in the Israeli economy. After all, it is Lapid who invested so much effort in shaping his image as a different kind of politician — more evenhanded, more professional, and more rational than the others. Just imagine what Lapid the journalist would have written about a finance minister who failed twice to appoint a new governor of the Bank of Israel. It would certainly be a scathing, arrogant text mocking him.

Nevertheless, Lapid, who is a political novice, could have been forgiven if he had been able to engage in some kind of introspection and apologize to the public for the embarrassment caused by blaring headlines in the world’s economic press. But even after former Governor of the Bank of Israel Jacob Frenkel and Leo Leiderman withdrew their candidacies, Lapid continued to do what he always does. Not only did he fail to express his regrets, he treated the whole situation lightly and made a big joke out of it, like he was some passerby who just happened to be there.

Frenkel was forced to withdraw his candidacy when news of an embarrassing incident that occurred seven years ago finally hit the press. The once and potentially future governor was suspected of shoplifting at Hong Kong Airport. Over the past few weeks, Frenkel has been unable to provide a reasonable explanation as to what actually happened there, and a dark cloud still hovers over his integrity and reliability. None of that interests Lapid. This is how he responded on his Facebook page late last month [July 29], after Frenkel announced that he was withdrawing his candidacy. “We really lost out. Frenkel could have been exactly what we needed: an experienced, wise and competent governor who decided to forego a fortune to do another term of service in the reserves. … If our public discourse continues to be so aggressive and disrespectful, we’ll never be able to convince anyone to come and contribute to the state. Wouldn’t that be a pity?”

Based on recent surveys about how Lapid is doing his job, it seems as if the public does not think it is "a pity." A poll conducted by the Knesset Channel on Monday [Aug. 5] found that 78% of the public does not trust Lapid as finance minister. His two failed appointments to the post of governor of the Bank of Israel certainly contributed to the feeling, evident in the poll, that support for his Yesh Atid party has shrunk from 19 to just 13 seats.

Instead of taking a moral stand and issuing a statement in which he expresses his relief that he avoided making such a problematic appointment to such a sensitive position, Lapid gave the impression that the public is petty, if only because it asked Frenkel to explain why he left a shop without paying for a piece of luggage he took. But that’s the way it always is with Lapid. He constantly acts the same way. He is never wrong, or so he claims, and frankly, there is something suspicious about a leader who is never wrong, or who lacks the self-confidence to admit that he has failed.

Then, just a few days later, Lapid got caught up again in what seemed like yet another lapse of judgment, when he tried to appoint Leo Leiderman to the position. Once again, after his candidate withdrew because of claims about his past, the finance minister produced a childish and arrogant response to the fiasco for which he was personally responsible. Once again, questions were raised about the person who was supposed to be appointed governor, and once again, instead of providing answers, he surprised everyone by withdrawing his candidacy, and Lapid found the whole thing amusing. “It turns out that professors of economics are a bunch of wild and crazy guys. I already miss those solid, stable people like [comedians Eli] Yatzpan and [Shlomo] Baraba,” he wrote. When journalists confronted him about the incident, he explained that neither the minister of finance nor the prime minister have their own private detective agency.

Instead of expressing any regrets about how Israel got tangled up in this embarrassing state of affairs, the very minister responsible for the fiasco let the public think that it was making baseless complaints and pestering him about something which was in no way his fault. It was as if the very demand that the finance minister conduct a meticulous examination of his candidate for the person who will navigate the Israeli economy was too much to ask.

In the brief period that Lapid has been active in the political arena, there have been many other examples of cases in which citizens who criticized him were confronted with cynical, derogatory rejoinders, instead of pertinent responses to their concerns. When a Facebook user named Tony wrote, “Correct me if I’m wrong, but you promised to oppose the biometric database,” Lapid responded: “Go on, Tony. Take a flashlight and canteen and keep looking. Then tell me if you’ve found a single place where I opposed the biometric database. All this effort to claim that I broke promises that I never made will not work.” Other Internet users conducted an investigation and discovered that Yesh Atid did oppose the biometric database during the election, because of what the party described as “the risk it poses to the privacy and security of Israel’s citizenry.”

The social networks may be the Yesh Atid chairman's home court, but ever since the elections they have been full of claims about promises that Lapid broke in the same perfunctory way. While it is true that in the game of politics, it is not always possible to keep all promises made to the electorate, and not all politicians who break promises or zigzag are necessarily liars, even if they do have 19 seats, Lapid has proven time and again that he is not only incapable of accepting criticism. He is unable to deal with it, and because of that, he is unable to learn from it, too.