Mazal Mualem outlines what the Israeli political map could look like one year from today. 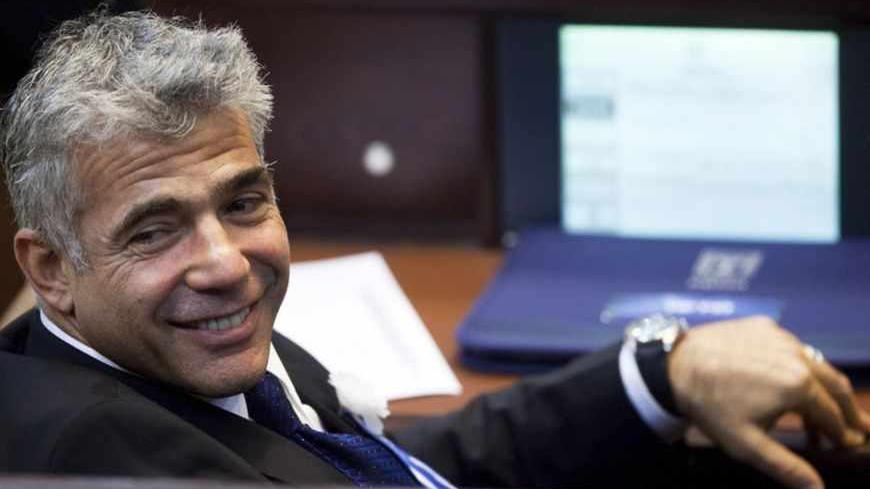 Yair Lapid, head of Yesh Atid ("There is a Future") party, attends the swearing-in ceremony of the 19th Knesset, the new Israeli Parliament, in Jerusalem, Feb. 5, 2013. - REUTERS/Uriel Sinai/Pool

On the eve of Israel’s 66th Independence Day, Minister of Finance Yair Lapid announced on his Facebook page that he had decided to resign.

It was Lapid’s 120th post to his half million Facebook friends, but the title that he gave it this time seemed even more sensational than usual. “Let’s Talk About (Prime Minister Benjamin) Bibi Netanyahu,” he wrote, and he spent 2,000 words doing just that. With remarkable proficiency, Lapid described how Netanyahu had deceived him when he promised to get the diplomatic process moving — writing that what actually happened was that Netanyahu succumbed to Knesset Members Zeev Elkin and Danny Danon. Not only did he shut the door on Abu Mazen. He also made a mockery of President Barack Obama, he explained. Once again, the journalists were fuming. Lapid bypassed them with his dramatic announcement by sending it directly to Facebook.

The moribund diplomatic process may have been the official reason for the crisis initiated by Lapid two weeks earlier, but his real motive was that he wanted to get as far away as possible from the Finance Ministry, and he wanted to do it as quickly as possible.

Ever since he took that demanding job, the country’s rising political star and leader of the Israeli middle class was forced to contend with an enormous budget deficit of over NIS 20 billion [$5.5 billion]. He did that by imposing a growing number of financial edicts on his electorate. VAT was raised by a full percentage point, and entitlements and benefits were cut. But gas prices continued to climb, and so did the cost of housing, an issue that sparked the major social protests of the summer of 2011. Europe’s economy was caught up in a serious crisis, and the Israeli economy followed with a dizzying downward spiral.

Netanyahu never gave Lapid the backing he needed, despite all of his promises. Rather, he enjoyed standing off to the side, watching Lapid suffer the slings and arrows of an outraged public. Lapid’s stature was being diminished, and with it his dream of replacing Netanyahu in the prime minister’s office. In carefully worded messages that Lapid posted just about every day to hundreds of thousands of Facebook friends, he tried to mollify the angry masses, who held his house under siege with their endless demonstrations. “Lapid turned on us!” “Where’s the money?” That was the writing on the wall, or more precisely, on signs that appeared on the walls near the finance minister’s home. Tel Aviv’s exclusive Ramat Aviv Gimel neighborhood, where he lives, was more like a fortress under siege than a quiet, upper-class residential area.

Even in the months leading up to his dramatic decision to leave the coalition, Lapid continued posting optimistic personal messages on his Facebook page. “Hold on tight!” he urged his supporters, who felt that they had been deceived. “I know it’s not easy. You can’t turn the economy around in a day, or even in three months. People say that the only thing Israelis care about is their money. I don’t believe that for a minute.” In another post he wrote, “Israelis are angry that their money is going to all the wrong places,” but he ended his post in a more confident tone: “I’ve taken a lot of flak over my Riki Cohen post, but I don’t regret it for a minute. Great leaders make great decisions. I know it hurts. I know it will take time, but it will work out in the end.”

But once his Yesh Atid party took a nosedive in the polls, Lapid looked like he had finally lost the self-confidence for which he is so famous, and his Midas’ touch as well. The role of finance minister simply didn’t suit him, and that’s putting it mildly. All that was left for him to do was to voice his regrets that he had been manipulated by Netanyahu and former Foreign Minister Avigdor Liberman into conceding the Foreign Ministry. Though he never blinked for a moment, the two of them still managed to lead him directly to the political guillotine. This left Lapid with no other choice but to raise the stakes and put everything on the line in an effort to stop his negative momentum. Lapid was “buried,” in every sense of the word, in a Finance Ministry that lies light years away from the new political arena.

At the same time, his relationship with Minister of Trade and Industry Naftali Bennett, his “brother” from the rightwing HaBayit HaYehudi party, wasn’t what it used to be. While Lapid was struggling to survive, Bennett tightened his rather infamously slack relationship with Netanyahu and made peace with the ultra-Orthodox parties, the very parties who once accused him of treason. Bibi’s wife Sara loathed Bennett for years, but now she actually invited him and his wife Gilat for an intimate dinner at the prime minister’s residence.

The idea of using the flailing diplomatic process as grounds for resigning from the coalition began making the rounds in Lapid’s circles a few weeks before Independence Day. All of his advisers agreed that he should leave the government and begin the rehabilitation process while serving as Chairman of the Opposition. They were also unanimous in their opinion about what the official reason for his resignation should be. It could not be because of economic issues, since this would be interpreted as an admission of failure. They had to find something else instead, something convincing and important, like the diplomatic process for example. Even though that particular issue was never really his “cup of tea,” Lapid was “turned on by the idea.” The diplomatic process had ground to a halt since US President Barack Obama’s visit a year earlier, and virtually all the experts agreed that a Third Intifada was no longer a question of whether but when.

Netanyahu seemed in no way disturbed by news of Lapid’s resignation. In fact, he was actually hoping it would happen. He was forced into accepting Lapid as a partner, and now he could finally return to his own element: a right-wing government with the ultra-Orthodox.

While the scenario presented here may seem like some work of fiction, it could actually happen in our complex political reality, especially given the economic and security challenges facing Israel on the eve of its 65th Independence Day.

To further the claim that this could be the year of big political surprises, I would like to present another scenario. This one is not impossible either, but it is the exact opposite of the earlier scenario.

After being subjected to enormous pressure from US President Barack Obama, Netanyahu shows an atypical proclivity for engaging in diplomatic activity. Having realized that he could not move the diplomatic process forward without changing the composition of his coalition, he replaced Naftali Bennett’s party with the Labor party, a move that provided much-needed momentum for serious negotiations with the Palestinians.

But we’ll leave that for Israel’s 67th Independence Day.