Israel Prepares for Next War With Hezbollah

The Israel Defense Forces is watching with concern as Hezbollah improves its military capabilities in Syria. 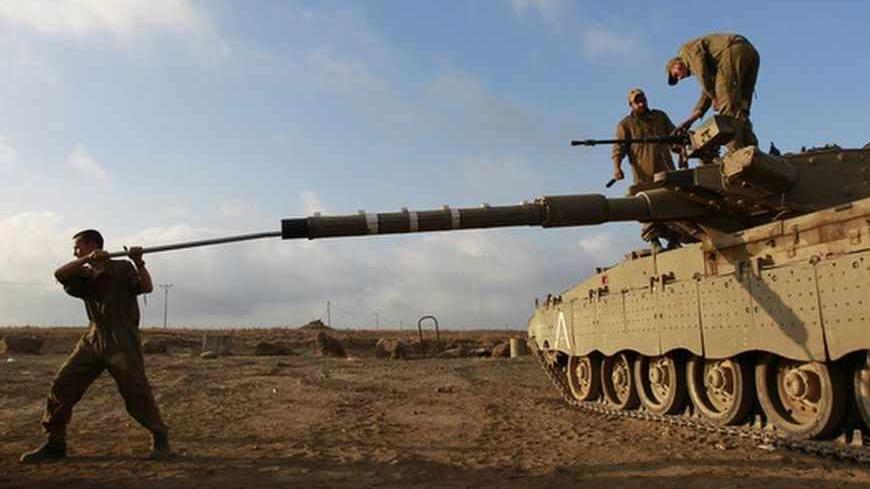 An Israeli soldier cleans the barrel of a tank near the border with Syria in the Israeli-occupied Golan Heights, July 17, 2013. - REUTERS/Baz Ratner

One of the more positive outcomes of the Second Lebanon War that raged between Israel and Hezbollah about seven years ago in 2006 is the peace and quiet that followed it. This was not just a military quiet, in view of the fact that Hezbollah has not fired so much as a single Katyusha rocket, a bullet or even a BB or cap gun. We’re talking about verbal quiet, as well.

Hezbollah Secretary-General Hassan Nasrallah, the blustery leader of the Shiite Lebanese organization, has earned himself quite a reputation all over the world for his thunderous speeches, highly detailed threats and promises of a bitter fate for the Jewish state that he spewed at breakneck speed. What evolved in Israel, on the other hand, was a subculture of listening to these bizarre speeches. They were always aired live during prime-time newscasts with simultaneous interpreting by popular experts on Arab affairs such as Ehud Yaari on Channel 2, Zvika Yehezkeli on Channel 10 and Oded Granot on Channel 1.

We all were addicted to Nasrallah’s vitriol, Caesar-like behavior and various odd deaths he wished upon us. His famous “cobweb” speech, in which he compared Israel to a cobweb that would be blown to pieces by the Shiite revolution, was a cult hit in Israel. It became a symbol for the struggle of a democratic, pluralistic and liberal society against radical religious forces. Nasrallah was a common guest in Israel’s collective living room. Then the war broke out.

Since then, it would seem, even Nasrallah has somewhat matured. While continuing to make speeches and use some boastful rhetoric he has nevertheless been making fewer threats and is not as brusque and as cocksure as he used to be.

This new state of affairs was best illustrated earlier this week, following the incident on Wednesday, Aug. 7, when an Israeli patrol went over a mine or bomb, and the planned Hezbollah ambush which lay, according to claims by the Lebanese army, a few hundred meters into Lebanese territory, just north of the Blue Line, the recognized international border between the two countries.

If such an incident had taken place before 2006, Nasrallah would not have stopped making threats, waving his finger and discharging fire and brimstone all around. And now, there is total silence in that sector. There is some mumbling, a faint Israeli reaction, but that’s it.

Several reasons may account for this turn of events: Either Nasrallah has really learned his lesson and adopted the philosophy of the “ugly” from the movie “The Good, the Bad and the Ugly” (played by the wonderful Eli Wallach): “If you want to shoot, shoot; don’t talk,” or the sides are well aware of the fact that sooner or later — probably sooner — another clash between them will break out in the old familiar format. So there is no need to strain one’s vocal cords at this time, nor is there any need for a dress rehearsal.

Tension is swelling on both sides of the Blue Line, and Nasrallah knows full well that the moment of truth is approaching. He does not feel like jumping the gun or snapping the tether prematurely. In the aftermath of the Second Lebanon War, Western intelligence agencies estimated that Nasrallah got a “serious tongue-lashing” from his masters in Tehran, who for many years had built up his capabilities in preparation for the Israeli strike against Iran’s nuclear installations.

According to that information, Tehran was livid, charging that Nasrallah had wasted an unnecessary war, which inflicted heavy damage on him while partially depleting his rocket stockpiles, for such an idiotic thing as kidnapping two Israeli soldiers. That was not the purpose toward which Tehran put so much time, money and energy. Back then, Nasrallah even admitted in his own words that if he had known that Israel’s reaction would be so strong and that it would drag him into such a fierce war, he would not have kidnapped Israeli soldiers Ehud Goldwasser and Eldad Regev in July of 2006. Rather, he would have waited quietly, preparing for that future watershed moment of real confrontation with Israel.

We in Israel are unable to know what the Israel Defense Forces (IDF) did or did not do near the Blue Line. All we can do is speculate.

On Aug. 8, Al-Monitor published an article saying that it was possible that the Golani Brigade soldiers who were wounded by that mine were headed to the el-Zaharani River to test the quality of the water. Maybe so. In Israel, incidentally, nobody is impressed at hearing that soldiers from the IDF operate across enemy lines.

Either way, the parties continue their preparations for the D-Day that awaits them. The starting point is the Second Lebanon War. Both sides — Israel and Hezbollah alike — have sworn to learn their lessons and correct their respective flaws. In Israel, it should be noted that war prompted a fascinating evolution. It started by eating humble pie and grappling with national embarrassment: How is it possible that the large, mighty, well-equipped IDF was unable to overcome a few hundred Hezbollah fighters? Headed by former Supreme Court Justice Eliyahu Winograd, a national commission of inquiry was established. It published scathing reports on the military, the political establishment and the way in which the war was conducted. These reports almost brought down the government of then-Prime Minister Ehud Olmert.

Several years have passed since that war, and it turns out that in reality, this war was one of the most successful and effective wars in Israel’s history. And that’s a fact. Since that war and to this day — seven years later — there has been absolute quiet on both sides of the border.

Two Israeli demands, which sounded totally outlandish prior to that war, were implemented shortly thereafter. The Lebanese army took positions in the south of the country, while a significant multinational force deployed along the Blue Line. Nasrallah rarely leaves his bunker. Hezbollah has been dealt a blow, and it’s finding it hard to recover.

The border has changed beyond recognition. Before the war, the IDF was the underdog. Hezbollah outposts dominated the border in terms of visibility and weapons range. The IDF barely patrolled the line, its outposts positioned in the rear, with inferior vantage points. After that war, the tables have turned. The IDF destroyed Hezbollah’s underground bunkers and outposts to which the organization to this day is forbidden to return. It operates in south Lebanon under a low signature. Even though rocket stockpiles have been replenished and more, Hezbollah has not been able to regain its self-confidence. Israel’s deterrence was restored, growing to an unprecedented scale.

By way of comparison, after the Six Day War in 1967, Israel enjoyed six years of relative quiet (putting aside, for a moment, the War of Attrition along the Suez Canal). After the Second Lebanon War, we’re already counting seven years of quiet, and that’s in the wake of a war that Nasrallah claims we have lost. The IDF says that Israel should only hope to lose all its future wars in such a manner. The military has already come to the realization that a blitzkrieg that will culminate in victory is no longer possible. Gone are the days when armored IDF divisions would sweep the area, seize the enemy’s positions and hoist the Israeli flag.

Wars against guerrilla organizations with state-like capabilities cannot be decided on the ground, but rather in the minds of people. Israel has been intensively preparing for such a war. In 2006, the IDF attempted to carry out a well-known ground maneuver that failed because Israel did not face a clearly defined enemy and its military was not geared toward looking for guerilla fighters in Lebanon’s mountainous terrain. Since then, several chief commanders of the Northern Territorial Command have promised, in their very own words, that Israel will not spare Lebanon’s infrastructures and will wreak as much destruction in as little time as possible to force Nasrallah to stop firing rockets and missiles well before he runs out of them.

And there’s something else. According to quite a few assessments, when the next war breaks out, Nasrallah will attempt to do what no Arab leader has attempted to do in the last 40 years. He will try to carry out a strategic seizure of areas within Israel proper. In a swift and startling commando operation, he will attempt to invade it and perhaps take over the Karmia kibbutz or the town of Shlomi or any other Israeli town close enough to the Blue Line. Israel might be caught off guard.

The IDF looks with concern at the ground capabilities Hezbollah has been demonstrating in Syria, noting that it has learned to operate large ground frameworks such as battalions, brigades and even larger ones. It can carry out an orderly ground campaign, putting up military-like resistance. In light of this, the IDF is bracing for the possibility that Hezbollah — if only to go down in history as having done this — will attempt to mount such a “mindset-changing” move, hitting Israel in its underbelly, thereby breaking the paradigm that “no foothold inside Israel’s territory will be allowed.”

Incidentally, this will take place if and when Israel strikes Iran. I have written extensively on this subject, although nothing is definitive. It depends on many variables as well as the personalities of the decision-makers on all sides. Israel views Hezbollah as a forward outpost of Iran’s Revolutionary Guard, a kind of an Iranian bridgehead that will rain hellish fire on it come D-Day.

In Israel, it is amply clear that the soldiers of the next war will be its citizens and not its military personnel. This is the reason why the Home Front Command has been beefed up recently, seeing a bitter fight over the division of purviews between Defense Minister Moshe Ya'alon and Home Front Minister Gilad Erdan.

The world has changed, and with it the nature of war. Israel, for a change, is trying to prepare for the next war and not for the previous one.