Is Normalization Possible Before Israel Ends the Occupation?

The resumption of peace talks has again raised the question of whether a people-to-people track should be pursued to boost the chances of peace. 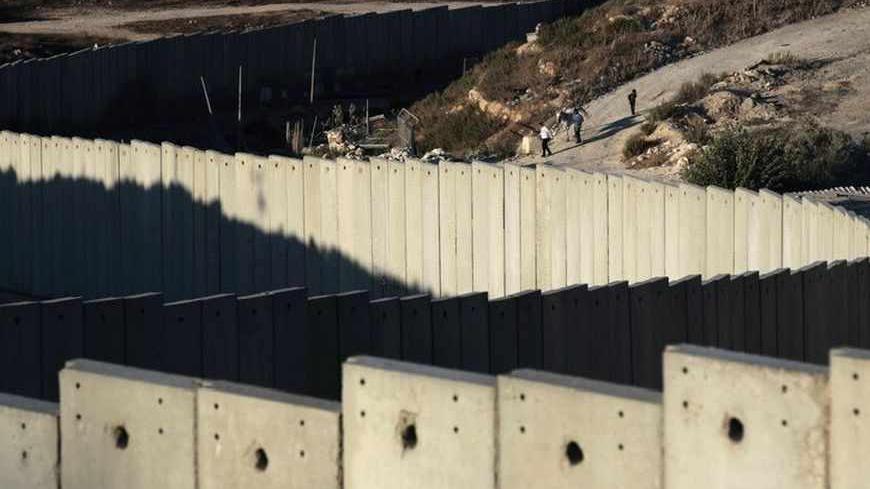 A section of the controversial Israeli separation barrier snakes around the Shufat refugee camp (R) in the West Bank, near Jerusalem, July 27, 2013. - REUTERS/Ammar Awad

Military occupation is not normal. Holding a population against its will using military power is considered by the civilized world in the 21st century an abnormal act that must be rectified. The issue, however, becomes complicated with 46 years of one people ruling over another. It is further complicated and can be counterproductive when in the name of refusing normalization with the occupier one rejects all forms of cooperation between the peoples, including those who are not directly responsible for the occupation.

Before the escalation of travel restrictions, the permit system and separation wall, Palestinians and Israelis were able to move easily from one community to the other. Yet, even back then, the issue of dialogue and normalization was a hot topic among intellectuals.

The pros and cons of Palestinian and Israeli dialogue were captured in a brilliant set of discussions triggered by “The Pitfalls of Dialogue,” an article by a Palestinian lawyer published in the mid-1980s, pre-intifada, in a local Palestinian newspaper. In the article, human rights advocate Jonathan Kuttab* argues that dialogue between occupier and occupied is asymmetrical, fails to acknowledge entrenched divisions, perpetuates the status quo, frequently replaces action and is often used by oppressors to co-opt and divide the occupied. Hebrew University professor Edy Kaufman responded to the article, arguing that difficult issues need long periods of sustained discussion, which one can regulate, and that dialogue helps build trust.

After the intifada erupted, discussions about dialogue ended abruptly. Palestinians were not allowed to enter Israel without a permit, and most Israelis were too afraid to set foot in Palestinian areas. Later, the 10-meter-high concrete wall put an end to any attempts at cross-border discussions. Yet, despite the physical separation, some Israelis always had a desire to connect — some from a genuine desire to reconcile, but most to heal their troubled conscience. In this environment, the actual process and act of meetings between the two communities became more important than the substance. And despite the many gatherings, which often seemed forced and unnatural, few produced results profound enough to delay or begin the process of reversing the occupation and its settlement colonization.

In 1993, the Oslo Accords brought with it a wave of Palestinian and Israeli activities including some projects that have lasted for years, managing to withstand the deterioration in relations. For example, Seeds of Peace, a US summer program started by the American John Wallach, brings together Israeli and Palestinian children at a retreat in the United States. The program's goal is to help stem stereotyping, but is limited to English-speaking children. Shara Simsim-Rechov Sumsum, a television program produced in cooperation with Sesame Street reached large numbers of children, but did not produce the expected change in attitudes.

Perhaps the most effective and sustained cooperation has involved activists from both sides focusing on anti-Israeli occupation activities. This was welcomed by Palestinians because the goal was not normalization, but helping end the occupation and opposing the settlements and wall built on Palestinian lands.

Palestinian activists opposing the occupation and violent resistance picked up the anti-normalization banner with the intent of challenging efforts at cultural and academic normalization. Some have argued that the movement at times overreaches and causes more harm than good to the Palestinian cause and deprives Palestine of potential Israeli peace supporters and converts.

The movement has gained a lot of ground internationally, especially among university students and faculty as well as grassroots supporters of Palestine. Modeled after the successful South African divestment campaign, the Boycott, Divestment and Sanction (BDS) Movement has been active around the world to delegitimize Israel for its continued occupation.

The launch this month of the Palestinian-Israeli peace talks has again raised the question of whether a simultaneous people-to-people track should be established to help convince a skeptical public. In May, Palestinian and Israeli businessmen launched Breaking the Impasse, an initiative aimed at overcoming the obstacles between the two peoples. Some opponents reject such ideas, insisting that Israel has always sought normalization without having to pay the price of ending the occupation. They point to the Arab Peace Initiative as the correct approach, in which Israel will receive normalization only after it withdraws from occupied territories, and not a day sooner.

*Jonathan Kuttab is the author's brother.