The Israeli attorney-general has dangerously declared that property in East Jerusalem owned by Palestinians in the West Bank could be confiscated by the Israeli state. 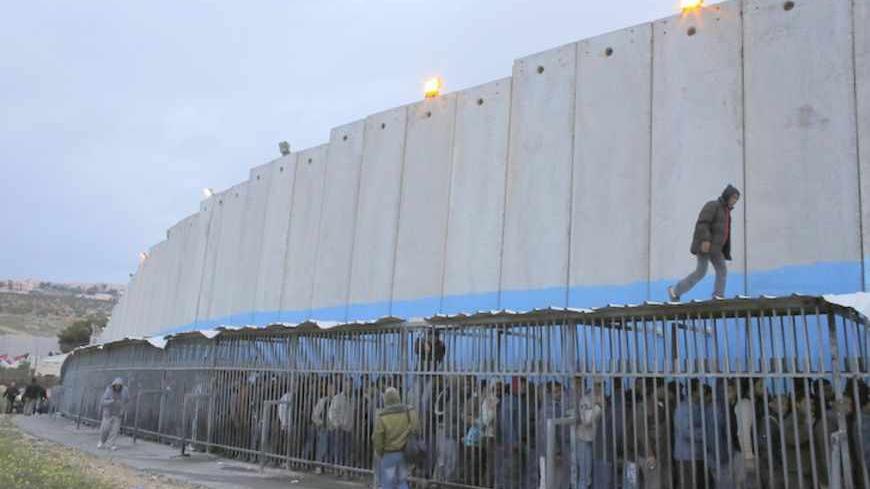 Palestinian laborers wait to cross into Jerusalem at an Israeli checkpoint in the West Bank town of Bethlehem, March 18, 2013. - REUTERS/Ammar Awad

One of the most controversial Israeli laws that have been attacked as having a racist connotation was passed in the Israeli Knesset in 1950. The Absentee Law considered property belonging to Palestinians who left their lands and homes during the 1948 war to automatically belong to the Custodian of Absentee Property. This controversial law is being applied to lands in East Jerusalem whose owners live in nearby West Bank cities. Ramallah, Bethlehem and Jerusalem were part of one country in 1967. It is typical for Palestinians to own land in East Jerusalem even if they don’t live in Jerusalem.

The Israeli news site Ynet quoted a statement made by the Israeli attorney general in an Israeli court that this 1950 law is being used against Palestinian property. Attorney General Yehuda Weinstein stated that property in East Jerusalem belonging to Palestinian residents of the West Bank is to be defined as Absentee's property. Weinstein was asked to produce a ruling on the issue in the course of a Supreme Court debate. Ynet states that in the past, attorneys general have given differing instructions on the subject, and now the Supreme Court has to rule whether Weinstein's stance is acceptable.

Until a few years ago, Palestinians living outside Jerusalem had access to their properties. With the raising of the wall, creation of checkpoints and introduction of the “pass” permit system, Palestinians living in West Bank cities other than Jerusalem need permits from the Israeli army’s coordinator office to visit Jerusalem and access their lands. These permits are given at the whim of the Israelis and there are no clear criteria on who gets permits or for what reasons permits are rejected.

With Palestinians unable to access their properties in Jerusalem and with the lawlessness that exists in the Palestinian half of the city, thugs have taken over some of these properties as their own. Israeli officials have been vague on the issue of applying the absentee law, which falls clearly under the Fourth Geneva Convention that renders taking property from the occupied to be contrary to international law.

Israeli lawyer Daniel Seidmann, the founder and director of Terrestrial Jerusalem, an NGO defending Palestinians in Jerusalem, feels that the Israeli government is back-pedaling on its earlier commitments. Seidmann said on his Twitter account that in 1995 he succeeded in extracting from the then-Israeli attorney general that the 1950 Absentee Law doesn’t apply to the occupied territories.

If the Israeli high court, which is hearing a case involving the issue, will rule in favor of recognizing the absentee law, the consequences to Palestinians and their East Jerusalem properties will be enormous. The Israeli custodian of absentee properties has routinely turned over properties under its control to settler and settler-related projects.

Furthermore, by declaring properties in Jerusalem that are accessible to Palestinians to be the right of the absentee custodian, lands on the Israeli side of the Wall may also lose their protection from being considered absentee property.

If the Israeli high court does legitimize the statement of the Israeli attorney general, we will be witnessing yet another clear application of a racist law against the indigenous Palestinian Arab population and in total contravention to international law. The most recent ruling by the International Court of Justice in 2004 stated that all areas occupied in 1967 fall clearly under the legal term of occupation. Therefore, the occupying power has no right to alter it, confiscate it or transfer its own people to it.