Palestinian President Mahmoud Abbas has rejected an Israeli offer to release 50 of an estimated 107 prisoners detained before the signing of the Oslo Accords, an issue that continues to stall negotiation efforts. 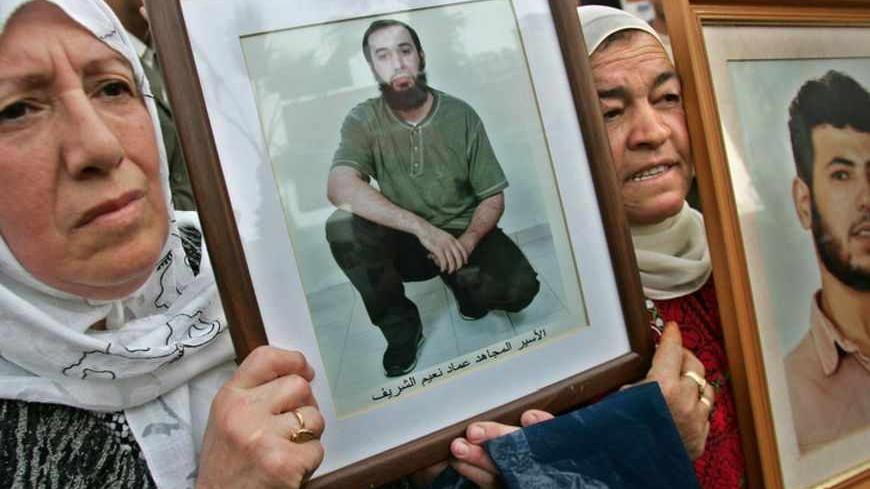 Palestinian women hold pictures of their sons during a protest calling for the release of Palestinian prisoners, in the West Bank city of Ramallah, Dec. 3, 2005. - REUTERS/Loay Abu Haykel

Amona Abed Rabo remembers the TV interview with Israeli President Shimon Peres quite well. Demonstrating with a photo of her son Issa Abed Rabo when US President Barack Obama visited Bethlehem, she repeated every question and answer of a TV interview with President Peres. She slows down and raises her voice when she gets to the section of the interview in which the architect of the Oslo Accords confirms his commitment to the release of Palestinians imprisoned before the Oslo Accords.

Some 107 Palestinian prisoners (some accounts say 103) arrested before September 1993 are still held in Israeli jails. The prisoners, who belong to the PLO’s Fatah movement, feel betrayed by Israel and their own leaders. Having been sent on military missions by their PLO leaders, these men are rotting in jail while the leaders who gave the orders for them have been free since 1993. Promises made by the Israelis, including former Prime Minister Ehud Olmert, have not been fulfilled.

This week it was revealed that Palestinian President Mahmoud Abbas has rejected an Israeli offer to have 50 of the prisoners released. Abbas insists that all prisoners must be released as part of a US-brokered agreement to restart face-to-face peace talks. US Secretary of State John Kerry, who was due to visit the region for an unprecedented fifth visit, has postponed his trip. Some believe that the disagreement over the release of the Palestinian prisoners might have something to do with Kerry’s decision to delay a visit that was aimed at announcing a small breakthrough.

Israel has always had a problem with releasing prisoners it says have "blood on their hands." Israel has also been adamantly opposed to the Palestinian request that fighters belonging to the PLO who are Israeli citizens be released on the request of the Palestinian side. In Israel’s eyes, these are Israeli citizens and the Palestinian leadership has no standing to ask for their release. Jawwad Bolous, an attorney working for the Prisoners Club, says that the Israeli Shin Bet seems to have dropped its objections. Among the 50 prisoners that Israel seems to have agreed to their release, there are those from both of these categories.

Prisoners held for a long time, such as those from the pre-Oslo Accords era, are held in high esteem among Palestinians, as they have been paying such a high sacrifice for their nation. However, the prisoners belonging to the moderate Fatah faction of the PLO feel that they have suffered because of their party affiliation.

When the Palestinians captured Israeli soldier Gilad Shalit, it was expected that Hamas would include these veteran prisoners within its prisoner exchange request. Hamas claims that they did have their names on the initial lists, but when negotiators insisted on lowering the number of long-term prisoners, the Fatah prisoners were compromised for Hamas fighters.

Discussions and negotiations between the PLO and Israel often included the release of these Fatah pre-Oslo prisoners and therefore Hamas leaders argued that they would be released sooner or later. Thus, they used their negotiating powers to release some of their own prisoners held for long sentences.

Abbas is facing some difficult questions if the Israeli side continues their intransigence. Should he accept a compromise that would make 50 prisoners and their families happy, or should he hold on to the hope that he can obtain the release of all pre-Oslo prisoners? The issue becomes of more importance amid the hints coming from inside the Israeli cabinet that the two-state solution would not gain enough support if it ever were put to a vote.

Some of Abbas’s inner circle would argue that if the aging Palestinian leader can’t deliver on the grand historic agreement of an independent Palestinian state, the least he should be able to do is secure the release of fighters from his own party, which he and other leaders sent to battle and have somehow abandoned ever since.