Iraqi Politician Calls On Maliki to Step Down

Iraqi politician Fakhri Kareem has called on Prime Minister Nouri al-Maliki to form a national salvation government and step down. 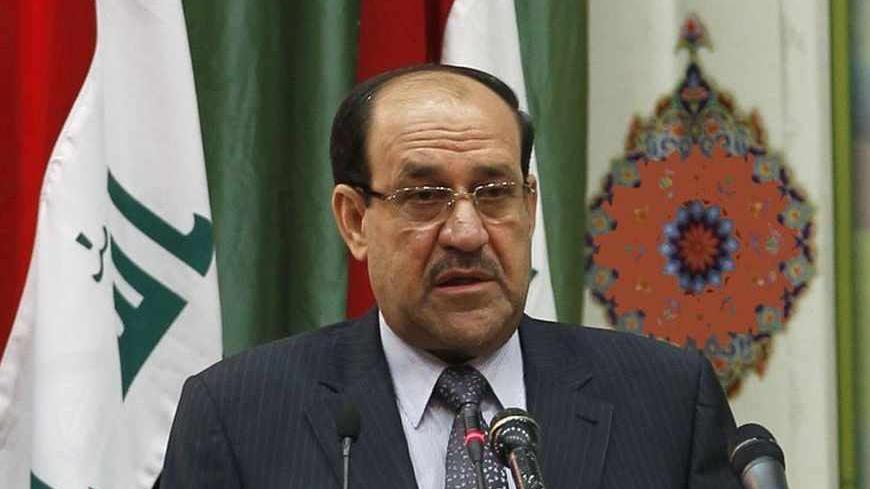 Iraqi politicians and activists are discussing the possibility of forming a “national salvation government,” following a July 24 suggestion by Fakhri Kareem, an influential politician and prominent journalist. The deteriorating security situation and muddled politics led Kareem to do what some other decision-makers have previously done in making the call.

Kareem had been a leftist opponent of Saddam Hussein’s Baathist regime, and after 2003 became one of Iraq’s most prominent politicians. Since 2008, he has acted as a political alliance maker in the formation of Iraqi governments through his ties to leaders of prominent coalitions. Kareem is also influential in part because of his ties to leaders in the Kurdistan region, maintaining strong relationships with Massoud Barzani, president of the Kurdistan Region of Iraq, and Prime Minister Nechirvan Barzani of the Kurdistan Regional Government, in addition to ties with Iraqi President Jalal Talabani. He used his connections in the Arab world and the region to play a leading role in helping Maliki’s government out of crisis following the 2010 elections.

Kareem stated in an open letter to Iraqi politicians, “If Prime Minister Maliki continues to neglect the life of the citizens, he will be left with no choice but to announce his full readiness [to] form a national salvation government and call for genuine national reconciliation.”

Observers of the Iraqi scene believe that the ongoing political and security tensions are leading the nation toward a dead end. Iraqis are concerned and pessimistic about the future of their country. The mood has not been helped by the raid conducted by armed members of the Islamic State of Iraq and Syria that freed 1,000 prisoners from Abu Ghraib prison, including leading members of the extremist organization.

The shock that followed the operation coincided with 17 areas in Baghdad and the provinces falling victim to car bomb attacks, leaving 300 dead and wounded.

Kareem, in his open letter, lamented, “Enough is enough. Oh dear friend [Maliki], you have neglected your duties of friendship and loyalty. Pride will not do you any good. [You should] take an unprecedented historical move and step down, sacrificing your own personal conviction that gives you the illusion of being able to move past [what is happening] and correct the path in a way that pleases the people.”

He also asserted, “Both political work and the country are slipping toward danger, which puts us — along with Maliki, his party and his supporters — on the edge and leaves us with no hope.” Invoking the Arab Spring experience, Kareem referenced events in Libya: “I was hoping that Maliki would dwell on the scene where Moammar Gadhafi was crying, begging, tainted with sewage, taken like an animal to his inhumane slaughter.”

Kareem contended, “What we have come to [in terms of the deteriorating security situation] has no solution but your removal.” He then said that the “scenario of the national salvation government will be [carried out] according to the results of the 2010 elections.” Kareem counseled Maliki, “Head to the parliament, propose this option and resign.”

The call for the resignation of the prime minister elicited varying reactions from politicians representing parliamentary coalitions. Mayssoun al-Damlouji, spokesperson for the Iraqiya List, said in a statement that her coalition “has already called for forming a national salvation front — after the political crisis reached the phase of ‘no solution’ — to avoid the problems that are coming to pass right now due to the inability of the government to manage the security and services issues.”

Jassem al-Helfi, a member of the Communist Party political bureau, told Al-Monitor, “The idea [of a national salvation government] has begun to develop, yet the civil leaderships need to coordinate their efforts, especially after the deterioration of the security situation following the operations that freed hundreds of prisoners in the Abu Ghraib and Taji jails.”