In a sign of bureaucratic inefficiency, Iraq admits that it has not been properly accommodating foreign workers coming into the country working for oil companies. 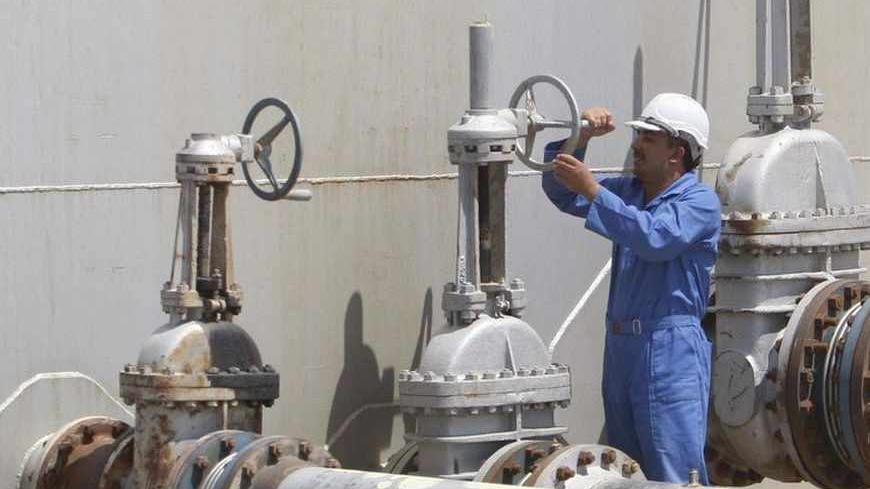 A worker adjusts a pipe at the Nassiriya oilfield in Nassiriya, 300km (185 miles) southeast of Baghdad, Sept. 8, 2012. - REUTERS/Atef Hassan

Iraqi authorities admitted that they are not providing facilities to foreign workers and oil companies operating in Iraq.

Oil Ministry spokesman Assem Jihad told Al-Monitor, “Iraqi parties in charge of the entrance of foreigners to Iraq are not providing facilities to contract workers and experts for foreign oil companies that were granted contracts with the Iraqi government.”

Jihad attributed the reason behind this to “the exceptional security situation the country is going through and the terrorist challenges it is facing.”

Iraq has been witnessing a spike in violence for the past two months. Car bombs and suicide bombers have claimed the lives of hundreds of Iraqis during attacks targeting markets, cafes, playgrounds and residential compounds in many provinces.

Jihad noted, however, “The importance of investment in all fields must be taken into consideration. The success of the state relies on its ability to pass laws that protect and encourage investments, in addition to creating a suitable ground and providing security and facilities to workers in investment companies.” Jihad considered the aforementioned to be “characteristic of civilized countries.”

“The non-provision of facilities does not only include the oil and investment sector in Iraq but also the rest of the fields, given the exceptional situation. We need to educate people about how to deal with the concept of investment,” he continued.

“There are still some mentalities that dub investment companies as monopolistic companies fed by the blood of the people,” Jihad noted, reiterating “the importance of dealing with this issue in a civilized manner and working on the provision of  facilities so as not to transform [Iraq] into a country that pushes investments away.”

Iraq had promised to provide visas for workers with oil companies within two weeks.

“The Oil Ministry has struggled a lot in terms of entrance and residency permits for foreign workers, especially after the [oil exploration] licensing rounds were finished," Jihad said. "We have met many times with the concerned parties because the companies have faced significant difficulties when it comes to residency permits, visas and medical tests. We tried to facilitate the entrance of their staff.”

He then added, “We noted that facilities granted to these companies in other countries are many. It is, however, a different story in Iraq. We are still at the first steps of the road to understanding the nature of the work of these companies. We have to provide facilities in all fields, give up on bureaucracy and launch campaigns in all state departments to develop the investment [sector].”

Despite this, Jihad affirmed that “the number of foreign workers in foreign companies operating in Iraq is minor in comparison to the number of Iraqis. Iraq stipulated in the contracts [granted to these companies] that they must rely on national staff by up to 85%,” affirming that “this is actually being implemented.”

The Iraqi parliament is trying to distance itself from the issue of the facilities required by foreign companies in terms of their workers’ entrance and residency permits.

Kassem Meshkati, a member of the parliamentary Oil and Energy Committee, told Al-Monitor, “The mission of the parliament is restricted to monitoring deals and passing laws. Facilitating residency permits and granting visas are part of the field of competence of the executive power.”

Meshkati also said, “In Iraq, we are still adhering to centralization and are prisoners to this concept. We do not believe that investment is a strong support for the economy.” He explained, “According to economic market theory, investment plays a leading role in economic activities. A developed and prosperous economy cannot exist without a factor that attracts investment.”

“There are some factors that could attract investment — including tax exemptions, customs fees and facilities that are offered to these companies, in addition to the provision of infrastructure. Iraq is providing none of these,” he continued.

On the security level, Iraq’s Interior Ministry said, “The procedures to acquire a visa and residency permit in Iraq are clear.” Interior Ministry spokesman Saad Maan told Al-Monitor, “In general, our procedures are clear in terms of granting residency permits and visas. [It is done] according to specific mechanisms,” explaining that “there is a special mechanism for granting visas to investors and journalists, which simplifies many of the stages.” He did not, however, reveal the nature of this mechanism.