To circumvent censorship, political critics have turned to satirical literature to express displeasure with local governance. 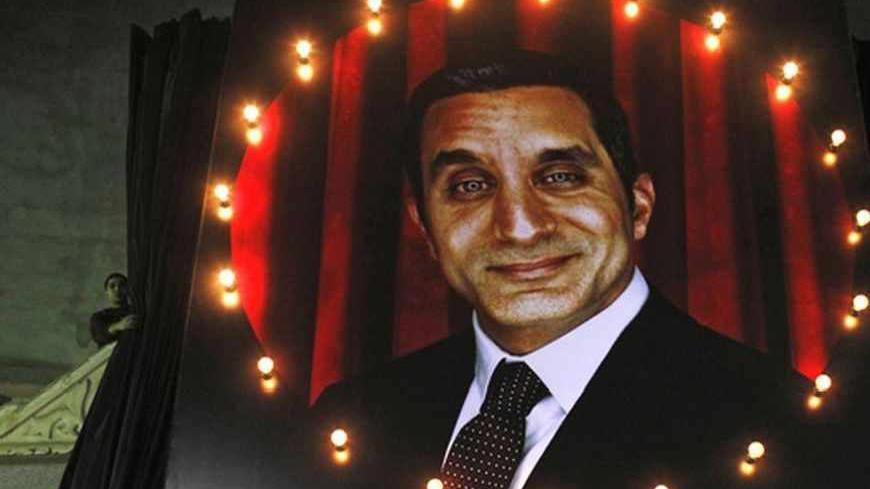 A worker lifts curtains in a theater to reveal a picture of Egyptian satirist Bassem Youssef for his comic show "Al-Bernameg" (The Program), in Giza, Cairo, Jan. 15, 2013. - REUTERS/Asmaa Waguih

Cynical television presenters such as Egyptian Bassem Youssef may soon no longer appear on Palestinian television outlets as a result of the increased censorship imposed on local media. Yet, this same censorship has stood helpless with the spread of sarcastic literature and media published on social networking sites. The comical episodes of a drama titled “Watan ala Watar” (Country on a String), which is aired on a YouTube channel of the same name, have drawn in excess of 6 million viewers as a result of the program being banned from the official Palestinian television station because of the harsh criticism it leveled against political leaders a few years ago.

In Gaza, the situation is different, as the growing trend has focused on the publication of satirical articles through social networking sites and local online news agencies. This trend reflects society’s discontent with all religious, cultural and political movements and makes these types of writings an absolute necessity.

Akram al-Surani is one of those authors whose first book, titled Watan Kharej el-Taghtiya (Homeland Out of Coverage), saw great success in the Gaza Strip following its publication in Ramallah, the West Bank. In one of his circulated articles, Surani said, “The people need a bladder the size of Gaza and Ramallah combined, big enough for them to urinate on the prevailing situation, frustration, national dialogue, turbid water, grim faces, false authorities, newscasts and high prices.”

Observers of satirical literature in the Gaza Strip have noticed that it focuses on political criticism more than it does on being funny, which might make it a catalyst for change in a city where the Arab Spring has failed to alter circumstances.

One of the oldest such authors is Tawfiq al-Haj, who hails from the city of Khan Yunis, in the south of the Strip. Haj began his career in satirical literature 35 years ago, when he began publishing a column titled “Nashid al-Mouanat” (The Hymn of Suffering) on the pages of the daily Al-Shorouk, and later in Fajr al-Quds newspaper, before shifting to electronic media in 2001.

As soon as Haj posts his articles online, they are republished on dozens of sites and become the subject of debate among website readers, the majority of whom stand in favor of raising the tone of cynical criticism in a city where only three newspapers are circulated. These papers are Al-Resalah and Palestine, which both have close ties to Hamas and its government, and Al-Istiklal, which is owned by Islamic Jihad.

In one of his articles, Haj wrote, “Wow! While the Chinese president rides unescorted in an ordinary taxi cab that takes him to his office, the most insignificant of Palestinian ministers rides in a convoy of cars donated by the emir of Qatar, so that he may reach — safe and sound — his chosen retreat. All the while, he hears from his hypocritical entourage matters contrary to what the people actually think.”

As the most famous of satirical authors, George Bernard Shaw, once said, “Capitalism is like my beard and head: mass production but bad distribution” — the Arab world has also known many a satirist. These include figures such as Syrian Mohammad al-Maghout, Palestinian Emile Habibi, Egyptian Bilal Fadel and Ahmad Rajab, Jordanian Yousef Ghayshan and Saudi Ahmad Qandil.

In an interview with Al-Monitor, Haj said that although satirical writings are scarce in Gaza, they do in fact have an important impact and are feared by the government, more so even than bullets. He clarified that this was the reason he was detained and jailed with [drug] addicts and repeat offenders two years ago today, Aug. 7, when he was treated in a very inappropriate manner.

At a time when media offices are being closed down in Gaza following their publication of an article or report, the Internet — as an avenue — is very hard to control. The Internet facilitates the dissemination of satirical articles and video clips that Gaza youth upload to YouTube, in a novel attempt — through humor and satire — to overcome the siege and repression, and as a means of survival and laughter.

Young Ahmad Balousha prefers writing satirical literary texts to cynical articles that deal with a specific subject. He shies away from politics, but writes about issues of daily life, neighbors and people, in a manner that is closer in form to a classical literary dissertation instead of solely concentrating on the direct subject matter.

Balousha, whom Al-Monitor met at a media production company, said that he began by writing poems, but felt that he excelled at satirical literature — which pushed him to concentrate on that instead. He expressed hope that his skills would develop enough for him to publish his first satirical novel, the inspiration of which would come from people he meets on the street, in the neighborhood or in the marketplace.

Balousha succeeded where none of the satirical authors ever did. He transformed his texts into a satirical program on YouTube titled “Bikhtisar” (In Short), in which he makes fun of youth and female issues. He explained that when his program gained an audience, he used it to produce eight video clips that attracted many commentators, some of whom said that they would have preferred him to concentrate on writing, while others opined that his program was a good addition to his satirical texts.

In a cynical text about war, Balousha wrote, “I used to always listen to newscasts where the presenter would say, 'The bodies reached the hospital completely charred.' I could never imagine what completely charred meant, but the Internet leaves nothing to the imagination, and I now know what the difference is between a charred body and one that is completely charred!”

Surani, on the other hand, prefers to only write, and is now getting ready to publish his second satirical book. In an interview with Al-Monitor, he said that he wrote his first article by chance about three years ago — after which he found himself writing more articles without knowing that they in fact were satirical. He explained that the reason that drove him to write this type of article was the paradox of political division that exists between the West Bank and Gaza, the influence that Jordanian satirical author Mohammad Tmeileh had on him as well as the readers’ reactions to articles that he used to publish through a list of emails before finally resorting to using Facebook.

While many think that Gazan society lacks a sense of humor and is very different from that of Egypt — which excels at making fun of its crises — the proliferation of social media sites and the need to write about them in a succinct and smart manner, contributed to the spread of cynicism. It transformed most social media users into satirical writers in one form or another, despite the fact that sometimes insults dominated their writings!

The “Maglouba” (In Reverse) blog was the first to deal with the details of daily life in Gaza, harshly ridiculing them. Its author was unknown, and used to write from Gaza before moving to Britain where he announced that his name is Hamza al-Bheisi. In one of his Maglouba blog postings, Bheisi wrote, “Three things make Palestinians stand up at attention: the national anthem, the ATM and the launch of a political party.”

By definition, satirical literature is different than making jokes. Old texts have defined it as “praise used to slander,” while more modern ones define it as “not meant to elicit laughter just for the sake of laughing, for that is called clowning. It is a form of black comedy that reflects the political and social pains of every citizen.”

Haj further said, “In light of the prevailing censorship and threats, I sometimes resort to writing symbolic and evocative satirical works meant to skillfully subvert the censor’s cutting block. I cannot remain silent because everything in Gaza that is on the verge of collapse drives me to ridicule and write.” He pointed out that in his 63 years of life, he has written 800 articles that have led to many a stressful situation.