Turkey's prime minister returns to his ideological roots with his emotional support of the Egyptian Muslim Brotherhood. 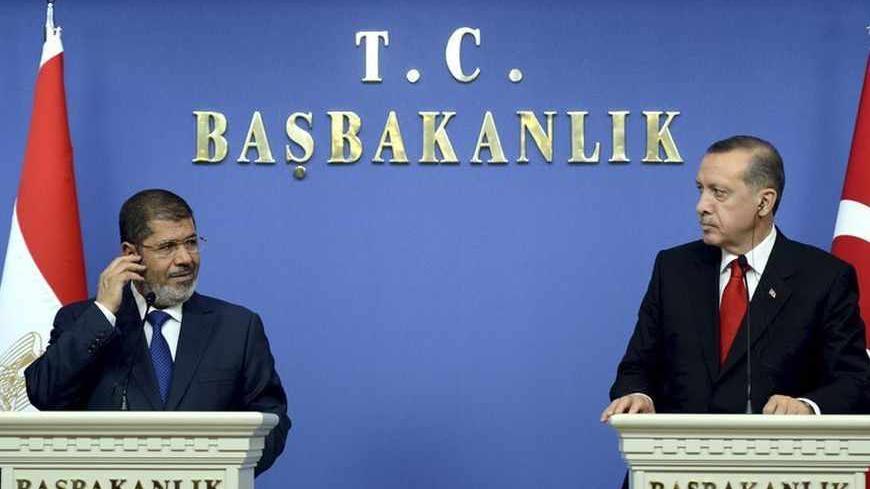 Turkish Prime Minister Recep Tayyip Erdogan, who appeared on a live program on Ulke TV, which is close to the ruling Justice and Development Party (AKP), couldn’t finish the program.

To understand why, let’s read a two-sentence news item that appeared Aug. 23 on the front page of the mainstream daily Hurriyet: "Prime Minister Erdogan, while listening to the farewell letter that Egyptian Muslim Brotherhood leader Mohamed El-Beltagy wrote to his daughter, who was killed in recent incidents, could not hold back his tears. When Erdogan couldn’t stop crying after several minutes and continue talking, the program was ended."

Hurriyet editors used the headline: "Couldn’t Speak Because of His Crying."

This is the first time the Turkish public saw Erdogan, who has been in power for 11 years, in such a mood, totally overtaken by his emotions. The prime minister was, of course, sincere. While crying on screen for several minutes, he wasn’t attempting to collect votes by exploiting emotions.

It is not a coincidence that Erdogan has been the toughest and most emotional leader in the world in his reaction to the military coup against the Muslim Brotherhood and the subsequent massacres of Brotherhood supporters. There is, of course, a "political rationality" to his reactions. After all, there is a first-degree ideological kinship between Erdogan’s AKP and the Brotherhood in Egypt.

The AKP leader and his close associates have been attributing more than ideological kinship to their close ties with the Egyptian Muslim Brotherhood. They see it as a historic and strategic partnership that seeks to establish a new order based on solidarity with Brotherhood branches throughout the eastern Mediterranean basin and the entire Sunni Muslim world.

The AKP attaches an ambitious level of significance to its "Brotherhood internationalism." As such, it was perfectly normal for the Islamists ruling Turkey to feel an acute sense of defeat and threat from seeing the Egyptian Brotherhood, the cornerstone of said vision, deposed by a coup and now facing extinction. After all, its grand project of historic importance has collapsed.

The Brotherhood and similar movements are far from achieving victory in the Syrian civil war. They are deposed and alone in Egypt, and isolated in Gaza. They can’t keep playing with only the Tunisian Ennahda on their side. This is a major failure — an utter defeat impossible to make up for.

Of course, the AKP leadership becomes more ill-tempered when it sees Western capitals treating the Egyptian coup with understanding and tolerance. Furthermore, to see Gulf countries, led by Saudi Arabia, outright supporting the coup has created massive disillusionment among Erdogan and his associates. This in turn translates into visible anger.

When one analyzes Erdogan’s references to Egypt after the coup, one can see that he identifies with the Brotherhood, and that with his narratives have become "Brotherhood-ized." In his statements, Islamic references and anti-Western themes emerge as dominant. For example:

At an Aug. 15 press conference at the Ankara airport before his departure to Turkmenistan, Erdogan said: "One day, now or later, a Moses will emerge to demand an account of the cruelty. ... Now, they have declared emergency rule in Egypt. I don’t think that will solve anything. Why not? Because I believe these people who believe in martyrdom will one day will gain their democratic rights in Egypt. If the West wants to test democracy, they have to understand this. ... If the Western countries do not act honestly on this issue, I believe one day democracy will be questioned in the world."

Two days later in Bursa, Erdogan once again saluted and glorified the Islamic concept of "martyrdom." Here are excerpts from the speech:

"Those who were patient with an autocratic regime for 70 years, couldn’t live one year with Morsi, who was elected with 52% of the vote. This shows the hypocrisy of those claiming to be democrats. They want puppet regimes they can pull the strings of. What did they say? That Morsi did not embrace everyone. Those who utter this 'he didn’t embrace,' say who brought Sisi to the top military post? Morsi. ... I am addressing the world. Can you deny this? Thousands of Egyptians are taking the road to martyrdom facing the tanks."

"Those who give $16 million to support the coup makers are partners of the coup. ... Today, there are two separate sights. One ... following the pharaoh and the other ... following Moses.”

"Today it is Egypt, tomorrow they may want to unsettle Turkey because they don’t want a strong Turkey in this region. Don’t forget everyone has a trap, but the grandest is God Almighty’s trap. ... I return your concern, your excitement, your enthusiasm with Rabia salute.”

Erdogan then saluted those listening him by showing four fingers that signified Rabia, meaning four in Arabic, in reference to the Rabia al-Adawiya Square, where Morsi supporters were massacred. A photo of Erdogan giving the "Rabia salute" was placed on his official Twitter account.

His final input included a remark that "Israel is behind the coup."

In an Aug. 20 address to provincial leaders of his party, he said: "What do they say in Egypt? Democracy is not the ballot box. What is behind it? Israel. We have documents. In a debate in France before the 2011 elections, the minister of justice and a French intellectual, he is a Jew also, used precisely these words: Even if the Muslim Brotherhood wins the elections in Egypt they won’t be winning because democracy is not the ballot box. This is what is being done.’’

If there are still those who want to look at Erdogan through the lens of "political rationality," they may think that Erdogan's Brotherhood narrative has been designed as a result of a political calculation. Even if we assume that this narrative is worded to appeal to domestic politics, it is a misguided political calculation because Erdogan can influence only a segment of his party’s base with this extremist narrative.

This "Brotherhood-ized" narrative can best keep alive the sympathy for Erdogan with the base of the Egyptian Muslim Brotherhood. But nobody should expect this narrative to result in anything else other than making Erdogan a partner of the Brotherhood's isolation in the region and the world.

Erdogan’s identification with the Brotherhood is a sign of his return to the starting point of the Islamic movement and to his roots. This is not a coincidence. We owe this situation to the Gezi uprising of Turkey.

Erdogan’s authoritarian and suppressive instincts against the Gezi protests of May 31 and afterward resulted in spreading this social movement to many parts of Turkey. Then, Erdogan saw this social eruption instigated by his own narratives and policies as an international plot of Western origin. This conclusion determined the harshness of his reaction to the uprising. The result was an irreversible ideological defeat.

Erdogan’s political influence paradigm that extended beyond his Islamist base collapsed at Gezi. Islamist Erdogan squandered his democratic and reformist values with his misguided reactions to Gezi. In the end, he is all alone with his Islamism.

Gezi events have fitted Erdogan in his old style, traditional and hardcore Islamist.

This is why instead of opposing the Egyptian coup by promoting and defending democracy, he has based his narrative on a religious foundation, thinking he could make the West see the light by mentioning the possibility of potential challenges to democracy. All these narratives indicate that Erdogan sees democracy as a "Western invention."

The Gezi uprising and the Egyptian coup appear to have taken Erdogan back to his political youth. Erdogan makes it impossible to introduce his party as a model of change or a transformation of "reformed moderate Islam."