Diasporan Assyrians, descendants of one of Iraq’s oppressed and scattered historic minorities, are examining establishing an autonomous or independent state in Ninevah province. 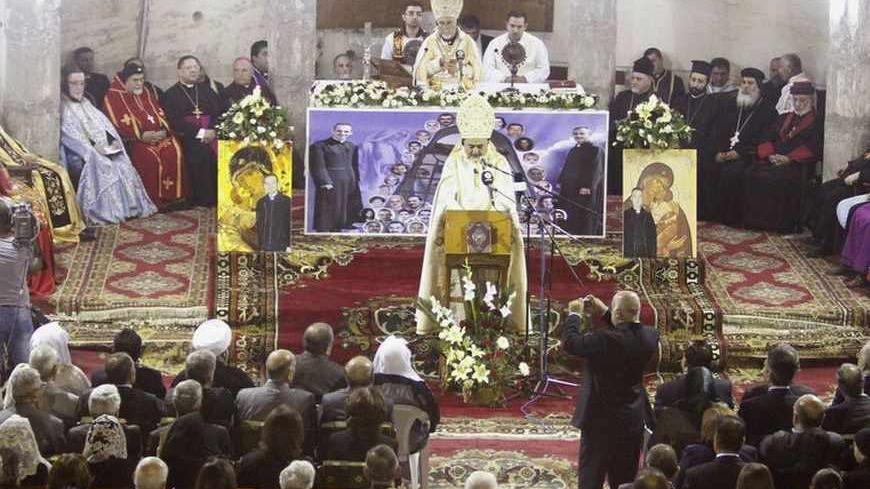 Iraq's Assyrian Catholic residents hold a memorial Mass marking the first anniversary of victims killed in a militant attack on Our Lady of Salvation Church in 2010, at the church in Baghdad, Oct. 31, 2011. - REUTERS/Saad Shalash

In light of the instability in Iraq and the indifference of the Iraqi government toward the protection of its citizens, Iraqi minorities are developing ways to save themselves from the hell in which they live in a country that has for a long time refused to embrace them. Immigration without return started decades ago, with Iraq indifferently and uncaringly ready losing its cultural components, one by one.

Yet, those who left — be they Jewish, Christian, Mandaean or others — remained nostalgic for their homeland. Because of the impossibility of safely returning, some minorities began thinking of other ways to achieve their national dream.

The Assyrian Association Union, in partnership with the Australian Assyrian Universal Alliance (AUA), held the conference "Return to Assyria," in celebration of Assyria Day on June 30. Australian Treasurer Chris Bowen and Linda Ben-Menashe, head of the public relations departments for humanitarian organizations for the Association of Jewish Representatives in New South Wales, attended the conference, which was held for the third year in a row.

The gathering in Sydney, Australia, focused on the right of Assyrians to return to their homes and their right to self-determination in their historical lands, primarily in the Iraqi province of Ninevah. Two main ideas headlined the conference: establishing an autonomous Assyrian state within Iraq or an independent state separate from Iraq. Each camp supported its proposal with legal evidence, taking into consideration as models either the Iraqi Kurdistan Region or the state of Israel.

Bowen is a supporter of establishing an autonomous Assyrian state in Ninevah province. He has made concerted efforts to convince the New South Wales parliament to adopt a resolution supporting the Assyrian people in establishing an autonomous state on their ancestral lands. His work efforts paid off, as the Australian Parliament recognized  Assyrian Genocide Day, known as Sayfo, as an annual memorial to the extermination of Assyrians at the hands of Ottoman forces and Kurdish armed groups.

On the other hand, Menashe urged Assyrians to follow the lines of the Zionist model, by forming global organization, working on returning Assyrians to their homeland, forming an army and finally using world lobbies to pressure international organization to recognize the state of Assyria.

Assyrians are divided over this proposal. According to Anna David, a lawyer specializing in international law, establishing an autonomous Assyrian state in light of the current conflict in the region does not serve Assyrians’ interest, as the Assyrian region would be a constant target by neighboring provinces, especially Ninevah, which possesses tremendous oil reserves. This is not to mention that these lands are disputed by a number of conflicting forces.

Assyrian author Farouk Curkis believes that Assyrians do not need to follow in the footsteps of others to gain their legitimate rights, especially since the Iraqi Constitution allows all areas of Iraq to establish self-rule provinces, and Assyrians are among the oldest peoples of Mesopotamia.

Nevertheless, the Assyrians’ expressed ambition to establish their own state, particularly in their last conference, provoked strong reactions by some Arab writers, who considered this to be a conspiracy and betrayal of the homeland. It should be noted that campaigns against Christians in Iraq are ongoing, claiming the lives of thousands, while a number of churches have been demolished, and clerics have been abducted.

Among Iraqi Christians, the Assyrians have the worst memories of modern Iraq. They were oppressed and subjected to mass murder at the hands of the Iraqi army after they demanded autonomy in 1933. The massacre was known as the Simele massacre. Between 600 and 3,000 Assyrians were killed, according to different sources. The massacre came as they were catching their breath after the Sayfo genocide, during the World War I, in which half of them died.

Regardless of the proposals and suggestions, Iraqi minorities continue to face major challenges and concerns because the Iraqi government has yet to make a serious attempt to build a civil state, providing equal rights and protections for all its citizens.