While intended to keep an eye on the progress of Yemen’s democratic transition, the National Dialogue Conference seems to have stalled the general operation of the country. 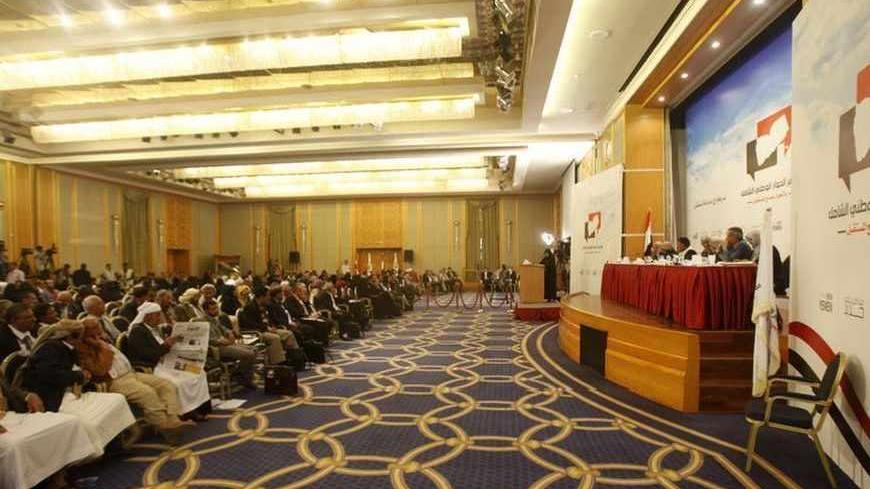 In Yemen, the entirety of society, including its political, economic and media elites, are concerned with one subject: the National Dialogue Conference that was launched on March 18, 2013. The dialogue caught everyone’s attention, including the international community, and the country’s elite exerted great efforts in its favor.

During such social events as weddings and funerals, people focused their conversations so exclusively on the dialogue that any other subject was seen as useless and out of context. Even those who refused to take part in the dialogue are also occupied with talking about its uselessness and absurdity. According to Southern Movement leaders like Ali Salim al-Beidh, it is a conspiracy fomented against the youth revolution and a way to circumvent the issue of the south.

At first glance, the dialogue seems useful. The concerned parties were preoccupied by it, leading them to lay down their weapons. It also seems like the dialogue will be comprehensive and will attract wide local attention. The truth, however, is a different matter.

The excessive focus on the dialogue has brought everything else to a halt. Other efforts that are probably more important for Yemen from the perspective of Yemeni citizens have gone down the drain. Additionally, the dialogue spared the government from having to answer tough questions. Instead, the government threw important tasks onto the dialogue table, especially since governmental officials were busy preparing for the dialogue as representatives of political parties instead of the government, as was the case with parliament.

More than 30 Members of Paliament, (MPs) of different political parties are taking part in the national dialogue that requires, according to its bylaw, full devotion to its agenda, something that makes the dialogue mission impossible to achieve given the specified timeframe. The mission is supposed to be realized within six months, half of which has already passed.

The coalition of Joint Meeting Parties considered, after boycotting sessions due to its dispute with the General People’s Congress, that the decisions made by parliament during its boycott of the sessions were illegitimate. The dispute developed into a political crisis that was only solved months later, following direct intervention by the president.

The paralysis of the National Dialogue Conference in Yemen not only affected parliament, but its repercussions also reached the executive authority. Many prominent ministers in the current transitional cabinet are also members of the national dialogue, including the ministers of foreign affairs, industry, tourism and communications. Consequently, their ministries and institutions are suffering greatly in their absence, especially given that the Yemeni government is bureaucratic and lacks the rules of organizational work and administrative delegation of authority to facilitate tasks. The important matters are handled by the minister or president, so in the absence of the top figure, institutions become paralyzed.

It is hard to imagine that the minister of foreign affairs would be preoccupied with the national dialogue in a country experiencing what would appear to be international tutelage. The international community is playing a more essential role than any other internal party. Moreover, Yemen’s transitional phase is taking place through an international initiative — the Gulf Initiative — drafted by international diplomats who are currently monitoring the progress of this phase in Yemen.

The situation seems even more chaotic if we take into consideration the donors’ 2012 economic promises, amounting to around $8 billion. A high-level diplomat, speaking on condition of anonymity, told Al-Monitor that only around $2 billion has been donated. The Yemeni government notes that these funds are important for the recovery of the economy. However, despite all this, the minister of foreign affairs who is, naturally, authorized to coordinate the international political and economic efforts, is still taking part in the burdensome National Dialogue Conference. Very local issues are being discussed, and they do not necessitate the role of any minister, at least not one as important as the head of Yemeni diplomacy.

Chaos has reached its peak in a country where oil, which constitutes more than 70% of the government’s budget, is running dry. Yemen’s local plants used by the cement, fabric and cotton industries_,are also collapsing, while the number of foreign tourists is constantly dwindling. Meanwhile, the ministers of tourism and industry are busy playing a role in the National Dialogue Conference that is distracting them from their strategically important ministries.

It is impossible to read any statement issued by the UN, a Western country or the Yemeni president without spotting praise for the dialogue or warning messages regarding its obstruction. What is more, the National Dialogue Conference has become a preamble for any speech of the international community in Yemen. The dialogue conference has become its utmost political priority in Yemen; it is presented as evidence for the success of the international initiative.

The international community is investing millions of dollars in the conference, despite its slackening in its other financial commitments to Yemen. These include the support of the Higher Committee for Elections and Referendum, which only received funds recently after warning that any additional delay might jeopardize the coming parliamentary and presidential elections in February 2014 — a decision reached based on the plan of the international Gulf Initiative.

The belated attention paid to the Higher Committee for elections — despite its importance and the futility of the dialogue conference’s outcome if there is no will to prepare for elections — is yet another indication that the dialogue has prevented the international community from thinking about the post-dialogue period. It also shows that this community is focused on the dialogue at the expense of other fundamental issues.

The international preoccupation with the National Dialogue Conference is accompanied by parallel behavior on the part of international organizations working in Yemen, be they old or new organizations formed for the conference. The massive technical support offered by these organizations to the dialogue conference is larger than any other support provided in the past for any other Yemeni political event. Some have even stopped all their programs that are unrelated to the dialogue in order to focus their energies and resources on the conference.

Moreover, dozens of experts and international consultants (some of whom have never set foot in Yemen before) have recently flocked to the capital's five-star hotels. They work within the umbrella of the National Dialogue Conference, whether directly or indirectly, in a scene similar to the flood of international experts to Iraq after 2003.

The interest shown by the embassies and organizations — especially the donors — in the dialogue conference has prompted local civic organizations to single out the conference and focus their activities around it. Thus, they went with the flow of the international community in Yemen, leaving other more feasible programs pending. They started developing new programs and linked them to the dialogue conference as a result of the foreign and formal internal interest. They are directing their activities toward donors that they rely on for their survival.

Despite all of the above, the most acute paralysis caused by the national dialogue conference is the one that struck the youth of Yemen — the founders of the 2011 revolution. The participation of 40 young representatives in the dialogue has become a tool used by traditional parties to prove that the youth are involved and that they have a role to play in the new Yemen. They do not pay attention to the fact that the conference, despite its significance in terms of shaping the future of Yemen, is a period that will not exceed six months. Thus, these parties escape recurrent questions about their monopoly of the decision-making process in Yemen, showing the youth that they have representation and have to stop asking for more.

In conclusion, the political parties of Yemen sent their hawks, pigeons, minds and leaders to the National Dialogue Conference, being the most important political battle currently ranging in the country. They ignored other battles through which they could engage in and practice politics and prepare for the future.

In any case, the dialogue conference is a fierce Yemeni political battle waged by too many parties to preserve their gains, which will not be enough for anyone to have the lion’s share. The fact is that the main and most important share lies somewhere between the dialogue room and the field, even if this does not clearly show for the moment, especially since the conference has paralyzed everything.