Israeli Prime Minister Benjamin Netanyahu and Palestinian Chairman Abu Mazen must each realize that the other side is unable to fulfill the expected demands. 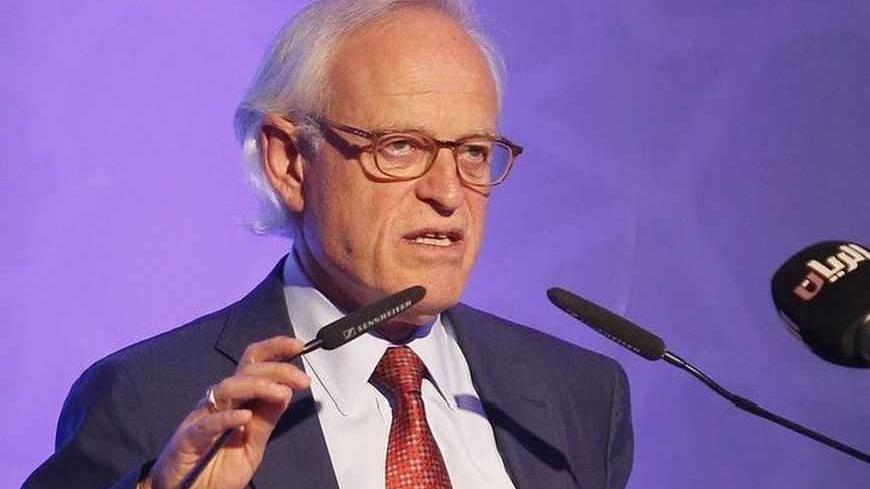 Martin Indyk, vice president and director of the Foreign Policy Program at the Brookings Institution in Washington, speaks during the US-Islamic World Forum in Doha, June 9, 2013. - REUTERS/Mohammed Dabbous

The negotiations between Israel and the Palestinians were born in a breech position following a traumatic pregnancy with innumerable obstacles and problems along the way. The signs are not encouraging, indicating that the newborn suffers from very serious genetic defects. The baby is currently in the neonatal ICU connected to a respirator. Professor John Kerry stands at the side of the bassinet and prays.

Even if they survive, the life expectancy of these negotiations is short, difficult and frustrating. The odds that they will grow, to accomplish "mitzvot and good deeds," as they say in the Jewish tradition, are not great. We all need a miracle or somebody with especially creative thinking.

The sides are so far apart on the issues that it is difficult for them to reach even the most basic of agreements. For example, the identity of the new US representative on Israeli-Palestinian Peace talks, the person who will need to roll up his sleeves, dip his hand into the cesspools and try to fix the plumbing. The two names being heard in Washington are Dennis Ross and Martin Indyk.

Another name has been just added to the list of candidates for the post of American envoy — former ambassador Daniel Kurtzer, who served as the American ambassador to Israel. The decision is yet to be made, and all options are still open.

It is possible that the name of Ross was introduced by US Secretary of State John Kerry on purpose as a diversion, knowing that the Palestinians will reject his candidacy — only for the nomination of Indyk to be approved.

Now extreme right-wing Israelis are trying to reject Indyk. Somehow Indyk’s name is connected to the New Israel Fund: He serves as co-chair of the fund, in its international council,a position which led Deputy Minister of Defense Danny Danon and his friends to label him “an enemy of Israel.”

There is no better “kosher” certification than that. Danon, an aggressive Israeli politician who represents the most hawkish of hawks in the delirious Likud party, somehow found himself serving as Deputy Minister of Defense, where the minister himself gives him the cold shoulder, ignores him and refuses to delegate any authority to him. Indeed, wondrous are the ways of Israeli politics, but when this type of person comes out against you, right before peace talks are about to begin, this means that you are the right person.

As a rule, the fixation the Israeli right has developed against anyone who has any relationship at all to the New Israel Fund is unnecessary and sick. This fund is responsible for a wide range of social, economic and public activity in Israel. That it also indirectly helps groups that call for a boycott on Israel (which is happening) or groups that work to bring indictments against Israeli officers has been addressed extensively in the media (and by me as well), is problematic, but is no reason to cast a negative pall over the vast majority of its very worthwhile activity.

While these words are being written, Indyk’s appointment, which was first reported by Al-Monitor's Laura Rozen, is still purely a matter of speculation. The Americans have not issued an official announcement. Prime Minister Benjamin Netanyahu, a man who is always afraid, even of imaginary shadows, may join forces with Danon and his buddies just to satisfy the extreme right for five whole minutes.

We need to hope that he doesn’t take that road. Indyk is the ideal mediator for the convoluted reality we are facing. I have no clue why or how he agreed to this suicide mission, but if anyone can complement US Secretary of State John Kerry’s determination and translate it into what will happen, or not happen, Indyk is the man. He knows both sides like the back of his hand. He doesn’t owe anybody anything. He is very well versed in the history and turmoil of the various attempts to achieve peace in the Middle East over the past two decades. He even personally participated in some of them.

Netanyahu and Palestinian Chairman Abu Mazen will not be able to serve up stories or excuses. He won’t need to waste precious time studying up on the material and, most importantly, he is committed to peace, strives to achieve it, believes in a two-state solution with all his heart and has an impressive network of relationships in the region on both sides.

When the talks begin, with or without Indyk the Americans will discover what they already know: The most Netanyahu can give is very far from the least Abu Mazen can accept. The odds for a permanent arrangement are nonexistent. This discovery is predictable, and we need to hope that the Americans have a good fallback plan, that will prevent an explosion like in the past (Camp David, 2000).

There are already quite a few people in the region who are making detailed plans for such an arrangement. One of them is former Knesset member Yossi Beilin, who has a pretty good relationship with Netanyahu himself, as well as a strong, productive and long-standing relationship with Abu Mazen.

According to Beilin, the Palestinian leader can, under certain circumstances, accept the concept of a “phased arrangement,” provided that two of his basic conditions are met: one, that there is a timetable for achieving a permanent arrangement that ensures that he will not be “trapped” in the interim arrangement forever, as is the norm in Israel. Second, that there will be a US international “vision” document that will state that the outline of the future permanent arrangement are the 1967 borders.

There has been a vicious dispute between the parties regarding this vision in recent weeks. At first, the Palestinians insisted that Israel itself declares its commitment to the outline. When they understood that it was a lost case and Netanyahu would not be able to utter those words (or as a very high-ranking Israeli official put it, “You cannot expect a turkey to go sit at the Thanksgiving table on its own accord.”), they sufficed with an American document, but demanded that the Israelis not deny it in public.

When the Israelis denied this intention in public vociferously last Wednesday, July 17, the talks hit a dead end and required emergency intervention by US President Barack Obama (a nighttime phone call to Netanyahu) and Kerry himself.

The Palestinians demanded that Bibi [Netanyahu] will also receive the vision document that was related to them (1967 border lines, Al-Quds [Jerusalem] capital of Palestine), and they apparently got what they wanted. On the other hand, the Palestinians received the American document with the vision related to Israel (“Jewish state” and the like), so each of the sides needed to quietly disagree with the other side’s vision, as long as they kept quiet and got to Washington on an agreed date, which has yet to be determined.

When Abu Mazen makes things difficult by saying that he’s afraid of a scenario in which Netanyahu will sign an interim arrangement, not pay the price in Jerusalem, not allow refugees to return and freeze the situation for 50 years, he is told that there’s no such thing as 50 years in the Middle East. Late Prime Minister Menachem Begin also thought that if he gave back Sinai, he would save the West Bank. Former Prime Minister Ariel Sharon was sure that if he withdrew from Gaza, he would save Judea and Samaria, and Netanyahu was certain that if he gave his Bar-Ilan speech [2009], he would gain international recognition and nothing would happen. So things are actually happening.

There’s no need to examine Bibi’s heart of hearts, says Beilin to Abu Mazen. According to his heart of hearts, you wouldn’t be here. Reality has its own working mechanism. Things need to get going. The time has come for them to move.

So they would appear to be moving. Blood, sweat and tears are what the teams at the top of the slippery slope can expect as they try to climb it. The most important thing is not to lose control, not to let anything explode, to maintain a permanent forward momentum, even if it’s at a snail’s pace. And most importantly, you need to get out of the box, recognize that there will not be any final status arrangement here, try to create conditions that will make it possible to reach an interim arrangement as part of a full scheme of the final status arrangement. As previously mentioned, we can call it a “phased final status arrangement” or coin other names for it. The main thing is that at the end of the day there is a Palestinian state with temporary borders alongside the state of Israel.

Right now, Netanyahu cannot deliver what Abu Mazen wants, but Abu Mazen can’t deliver to Netanyahu what Israel demands either, since he does not control Gaza and barely represents half of the Palestinian people. So we need to move slowly, but successfully.