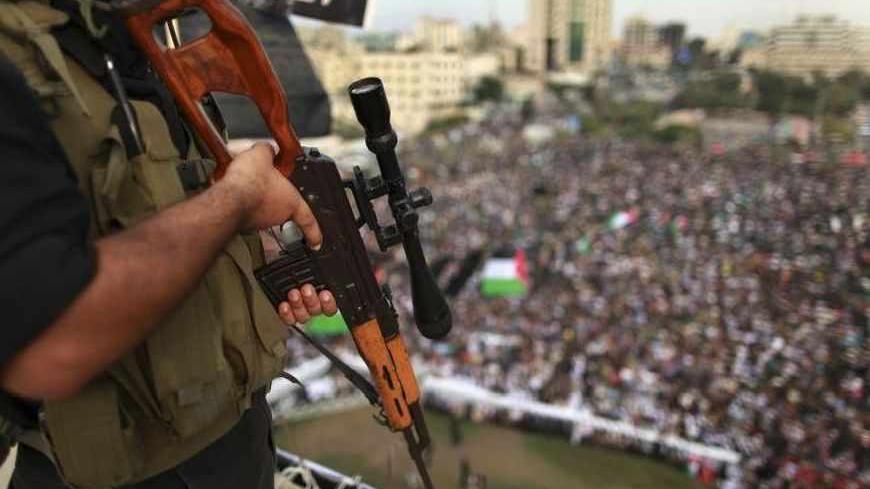 An Islamic Jihad militant stands guard during a rally marking the 25th anniversary of the movement's foundation in Gaza City, Oct. 4, 2012. - REUTERS/Suhaib Salem

While Hamas is said to be the first victim of the ouster of former Egyptian President Mohammed Morsi, its Islamist counterpart in Palestinian Islamic Jihad remains undeterred by events across the border.

Senior Islamic Jihad leader Khader Habib said that what is happening in Egypt is an internal crisis that his faction does not want to meddle in, yet he wished Egypt a “speedy recovery” from its current state of chaos.

“We understand the ultimate connection between Egypt and Gaza, this is why we wish Egypt nothing but the best as we are affected by all what happens there,” Habib told Al-Monitor.

The Islamic Jihad leader dismissed speculation that his movement will benefit from the current crisis, which is undoubtedly going to have adverse effects on its rival Hamas.

“We are not looking to be faction number one, all the Palestinian factions are meant to work against the Israeli occupation as one, not to compete with each other,” Habib said.

Islamic Jihad has been able to avoid repercussions of the ever-changing regional climate by maintaining warm relations with all parts of the Arab and Islamic world. This has been accomplished with a strong devotion to maintaining the resistance against Israel, and thus welcoming support from any party that wishes to assist, regardless of religion. Its ability to combine its Islamic ideology while carrying the national banner of resistance has helped it escape the consequences of the regional turmoil.

This was a fact duly noted by Gaza-based political analyst Hassan Abdo.

“Islamic Jihad has better chances right now. It’s trying to compromise with everyone around it. It has good relations with the Palestinian Authority, Iran, Syria and Egypt. It never takes one side and leaves the others,” Abdo explained, as opposed to Hamas, which dumped its alliance with the Iran-Syria-Hezbollah in favor of a Sunni axis that’s seemingly crumbling with Morsi’s downfall.

Despite the stated advantages for Islamic Jihad, it’s not expected that the movement will seek to overtly capitalize on the Egypt crisis and push toward expanding its role in the local political scene at the expense of Hamas.

“Islamic Jihad still doesn’t believe in governments under the occupation, which means it will improve in its own field: resistance and popularity,” Abdo continued.

Habib dismissed talk that the overthrow of the Muslim Brotherhood marks the end of political Islam as a regional project. He rather referred to it as a dispute and division among people and politicians.

“Arabs and Muslims should act as one; invest on what benefits them and avoid what harms them,” Habib noted.

Although Hamas is losing a great supporter in the Muslim Brotherhood, the coming leadership in Egypt cannot abandon the Palestinian resistance project, according to Abdo.

“It’s still possible that the next regime might keep good relations with Hamas as well. Despite it belonging to the Muslim Brotherhood, it still relatively has its own different view,” Abdo said.

But the signs of serious consequences for Hamas are not to be discounted, Abdo stressed, as Egyptian media continued to drag the Palestinians — in particular Hamas — into its internal crisis, with repeated accusations of collaboration with the Muslim Brotherhood.

“This for sure is worsening Hamas’ relation with Egypt on both a popular and political level. I don’t exclude the possibility of Egypt punishing Hamas later for what they are assumed to be involved in,” Abdo said.

Hamas is already feeling the initial backlash from Morsi’s ouster, with the closure of the Rafah crossing and the smuggling tunnels along the border with Egypt prompting fears of a fuel and economic crisis in the Gaza Strip, with thousands of Palestinians stranded from entering or leaving Gaza, as Asmaa al-Ghoul reported for Al-Monitor.

Habib said Islamic Jihad — like all of Gaza — is suffering from the closure of Rafah, urging Egyptian authorities to open it to avoid a crisis in Gaza.

"Rafah is the only room Palestinians in Gaza can breathe in, we are talking about a real crisis when it's closed."

With Hamas now squeezed after Morsi’s removal, there is speculation that this may push Hamas to return to talks with rival party Fatah to achieve reconciliation.

In this context, Habib hoped the two parties would reconcile based on pressing national concerns, and not based on regional developments.

“Fatah and Hamas should reconcile because this is the national interest for all Palestinians, not because of rearrangements of allies outside.”