The Israel Defense Forces shift emphasis away from conventional weaponry. 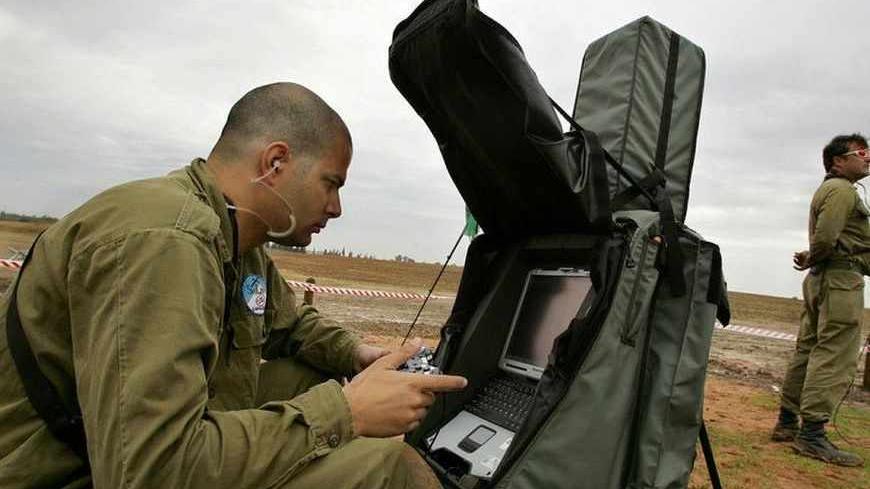 Israeli soldiers from Rafael- Israel's Armament Development Authority, fly a new drone (remote-piloted vehicle), part of the "SkyLite" family of mini remote-piloted vehicles that gather field intelligence with an electro-optic sensor, in a demonstration for the Israel Defense Forces In Gahash, near Tel Aviv, Nov. 21, 2005. - REUTERS

A few weeks ago, I published here in Al-Monitor a long talk I had with a colonel who had just been discharged from the Israel Defense Forces (IDF). During that talk, the officer, who wished to remain anonymous, dismissed all the age-old conventions held by a consensus of the Israeli defense establishment over more than a generation.

There's no need, he said, for so many tanks; there's no need, he asserted, to have so many planes; the Israeli defense doctrine should be changed and revamped to meet the events in the Arab world in general and the challenges of the future battlefields in particular.

As noted, several weeks have passed since that talk, and now, July 11, Israel's Chief of Staff Lieutenant-General Benny Gantz has published with much fanfare his dramatic plan for an IDF facelift.  What emerges from this plan is that Israel intends to let go of a considerable percentage of its ground forces, hundreds of tanks, dozens of fighter jets and thousands of career personnel. Israel has come to the realization that the chances of facing off against large tank-based armies in the future are nearly nil. Such armies are becoming a thing of the past as are the countries that maintained, trained and funded them.

Until two years ago, Syria was a stable nation-state with a large tank-based regular army. That Syria is gone. Egypt was a stable nation-state with a huge, modern, trained army equipped with cutting-edge Western weaponry systems. The military is still there, but it's the country that's wavering. Today's Egypt is the "sick man on the Nile," embroiled in endless chaos. Bankrupt, it needs the funding and handouts from the Gulf states (until the United States decides whether or not there was a military coup there). Lebanon is torn asunder. Jordan is faltering.

The conventional threat to Israel has been lifted. In its stead, other threats have emerged requiring a different response. Israel, for a change, understands this change.

Although nobody can yet predict where the Arab Spring will take us, some of the results of this historic process are nonetheless evident already. The old order is gone. And with it, new risks have emerged which, in turn, will change the nature of war. No longer will we see thousands of tanks pitted against each other, backed by heavy artillery and infantry. We're transitioning to wars on terror, threats of rockets and missiles ("stand-off fire") and the nuclear danger.

With a slight delay — although it's better late than never — the IDF goes with the flow of a shifting reality. The proposed changes are nothing short of historic, dramatic and hard to digest by the ordinary Israeli.

Israelis were born out of one trauma, the Holocaust, which is etched for perpetuity in their collective DNA. Then they were raised at the shadow of another trauma, the Yom Kippur War, which heightened their fear of a destruction of a "Third Temple." Israel cannot afford to lose a war. At most, it can reach a draw, just as that bloody war ended in October 1973, after Israel was caught complacent, smug and unprepared, and was almost vanquished.

There isn't a single Israeli whose hand won't tremble when asked to endorse such a significant cutback in the equipment and forces that serve in his defense. IDF tanks are the defensive shield of the people of Israel against being cast into the sea. The Israeli Air Force (IAF) is known as the "insurance policy of the Jewish people."

One of the national photos forging the Israeli spirit is that of the F-15 fighter jet flyby over the concentration camp in Auschwitz. This flyby, which took place in 2003, was initiated and led by one pilot, Amir Eshel, many of whose family members had perished in the Holocaust. Today, Maj. Gen. Eshel is the commander of the IAF. If Israel were to strike in Iran, Eshel would be the one to plan and spearhead it.

During that flyby over Auschwitz, Eshel knowingly violated an earlier agreement with the Polish authorities who had set a particularly high altitude for that flight. Eshel decided that the image was by far more important than some bureaucracy or logistical issues, leading the formation to a nap-of-the-earth flight over the camp where over a million Jews had been murdered.

Since that day, this photo decorates many of the offices of IDF generals and IAF commanders. The pestering question — could the Holocaust have taken place if the Jewish people had had an air force and a military? — lingers on.

This is the Israeli-Jewish spirit, these are its fears. It is against this backdrop that we can understand why this process — whereby many IDF organs are being cut off, consequently reducing and restricting its capability in face of a reality that's not getting simpler — is a problematic one. The possibility of a third holocaust, which constantly looms over all Israelis, turns such a downsize into a historic event requiring its executors to pluck up enormous emotional courage.

While many might not know this, the largest, most expensive and most important division in the IDF today — and for quite a few years already — is what is known as Unit 8200, better known as eight-two hundred. This is the huge IDF surveillance and intelligence unit. Drawing the brightest, most feverish and creative minds from among Israeli youths, it is responsible for a large part of the excellent, high-quality and rare intelligence that enables the IDF to do what it occasionally does.

The heroes of Israel's future wars will not be dust-covered tankers, anonymous pilots or paratroopers in red berets. Those heroes would be the techies, hackers, web and high-tech geeks that lie around in the halls and rooms of Israeli intelligence, bombarding their bosses with ideas, developments and new devices.

Israel is a global high-tech leader, and 8200 and similar units in the IDF, Shin Bet and Mossad are the hotbed where the start-up entrepreneurs of the future Israel can be found.

Shortly, when the F-35 stealth fighters are delivered to the Israeli military, in return for which veteran fighter jets will be decommissioned, the IAF will become smaller yet smarter at the same time. Today, the air force consists of hundreds of planes. In a few years' time, dozens of planes will be taken off its complement.

The IDF's air force was established to defend "Israel's skies," yet this role has changed. There are no significant rival air forces around us that can intrude Israel's narrow skies. There are, however, tens of thousands of rockets and missiles. There's not much the air force can do about that. As a result, the importance of the number of fighter jets decreases, whereas the importance of the ability of a single aircraft to strike multiple targets simultaneously from a great distance and with great precision increases significantly. This is precisely what Israel will get from the stealth fighter which is considered truly the last manned fighter jet.

The future battlefields will be robotic, technological, reduced to the micro- and nano-levels, based on accurate intelligence and developments that will allow a war to take place virtually hands-free. In this respect, Israel is light years ahead of its enemies, but all of this is dwarfed by one Iranian bomb mounted on an Iranian long-range Shahab missile poised to threaten Tel Aviv, Paris or Washington.

And one last revolution in conclusion: The government of Israel, on July 7, approved the law for "equal sharing of the burden." This, too, is a historic, rattling move, whose implementation is questionable. It's not only the Arabs that are changing, but Israel is also no longer what it used to be when the early visionary Zionists established it.

In today's Israel, the number of ultra-Orthodox and Arab children reaches nearly 50%. In a few years' time, the number of 18-year-olds who will not enlist will be higher than those who do. The birthrate among the ultra-Orthodox and Arab Israelis is much higher compared to the Israeli population that shares the burden of defense (albeit this segment of the population is much more prolific compared to the average percentage in the West, especially in Europe). As times goes by, this situation becomes increasingly intolerable. The exemption awarded to Arab youths might be understandable (it would be hard to expect them to enlist in the IDF to fight their brethren and it would be hard to expect the IDF to enlist them), yet when it comes to exempting ultra-Orthodox Israelis, some of whom are not even Zionists, there's a growing, widening schism.

Finance Minister Yair Lapid, until recently a popular journalist and for the last few months a (less popular) finance minister, raked in 19 Knesset seats in the recent elections riding this ticket. Under his inspiration, the government adopted the new law which stipulates that four years from today, the state of Israel will also recruit ultra-Orthodox men, except for a quota of 1,800 "prodigies" who will receive special authorization to pursue their Torah studies.

This is a historic law rending Israeli society, rocking the status quo and threatening to ignite a war amongst brothers. Ever since the government approved the bill, many ultra-Orthodox soldiers were assaulted in radical orthodox neighborhoods. In recent years, ultra-Orthodox men have started enlisting, in small albeit significant numbers. Now, when the draft is coerced by the state, their response is a radical and violent one. Instead of fixing the distortion, there's danger that it will exacerbate to the point of destroying the delicate and sensitive fabric between secular and ultra-Orthodox Jews in Israel.

The deadline is four years away, at which point we will know whether this was a successful or abortive initiative. It seems to me that neither one of the hawkish sides in Israel can afford to see it fail. Four years in the Middle East is a long time, and in Israel it is almost an eternity. By then, go figure what will transpire here, what kind of "spring" will break out and in which country, who will rise and who will fall. So the average Israeli does what he does best: he goes with the flow, prays and hopes for the best.