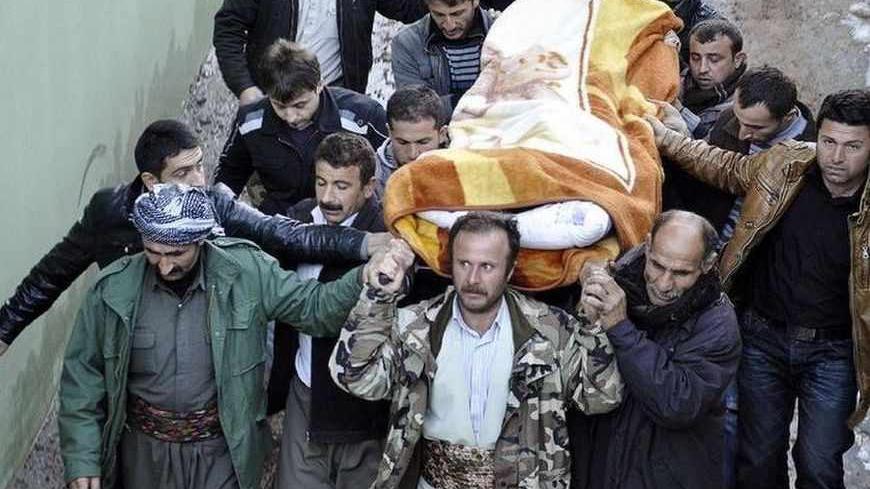 Locals carry a victim, killed in airstrikes, to the morgue of a hospital in Uludere of the Sirnak province, Dec. 29, 2011. Turkish warplanes launched airstrikes against suspected Kurdish militants in northern Iraq near the Turkish border overnight, the military said. Local officials said the attack killed 35 smugglers who were mistaken for guerrillas. - REUTERS/Stringer

In George Orwell's novel 1984, he described “doublethink” as “the power of holding two contradictory beliefs in one’s mind simultaneously, and accepting both of them.” Neither belief need be wrong, but they certainly can’t both be right at the same time. Here is what I mean:

During the early hours of May 31, Turkish police carried out a controversial raid to disperse Gezi Park protesters who, at the time, were sleeping in their tents. A few tents caught fire, and the day continued with police intensely clamping down on protesters, using water cannons and tear gas. Turkish Prime Minister Recep Tayyip Erdogan blames an “international interest rate lobby,” “foreign agents” and “terrorist groups” for attacks on the police, due to their jealousy of his Justice and Development Party's (AKP) success. Yet many consider the excessive police force to be the reason behind the record number of people pouring into the streets of Istanbul, and other cities across the country, in support of these protesters and their individual rights.

Without wavering, Erdogan took full responsibility for all police action during the Gezi Park protests, which, according to Turkish Medical Association, left five dead, 11 blinded and more than 8,000 injured. On top of that, Erdogan ordered that police officers on duty during the protests were to be rewarded with bonus payments for the next 24 months — the ultimate bonus granted to security officers for exceptionally successful operations. The bonus was later reduced to four months, as the off-duty police officers expressed displeasure.

On Dec. 28, 2011, the Turkish military allegedly received a tip that a group of people entering Turkey from Iraq, via the border town of Uludere located within Sirnak province, included key members of the Kurdistan Workers Party (PKK). Turkish jets targeted the group and left 34 people dead. It was later discovered that the group did not include PKK members, but instead, smugglers forced into the business for economic reasons. Erdogan met in Sirnak on July 26 with some of the families whose loved ones were killed in the air strike. This was the first face-to-face conversation between the prime minister and the family members.

Unlike Erdogan's taking full responsibility for the police action during the Gezi Park protests, he argued that this cross-border military operation was carried out without his orders. No doubt that the prime minister is walking on eggshells in his attempt to balance Kurdish support for his negotiations initiative with imprisoned PKK leader Abdullah Ocalan. Erdogan is also keeping an eye on upcoming projections for local and general elections, keeping his constituency intact so that no concession is made in the fight against terror.

When Erdogan met with the families of the Uludere victims last week, they asked how he, as prime minister, did not know who gave the order for the air force to launch a cross-border attack. As speculation mounted in the Turkish media, the prime ministry released a written statement.

“It was made clear that not all operations are carried out with the knowledge of the prime minister, as the units in charge of the fight against terrorism take necessary actions based on the authority given to them by the law,” it said.

Erdogan also made it clear during his July 30 speech that the issue of the cross-border strike is an ongoing case in the Turkish courts, and that judges will determine exactly who is responsible for this tragedy.

"As if it’s not enough that people discriminate amongst people, now they are also discriminating against the deceased. We feel exceptional sadness in the name of humanity, and conscious for what they do,” he said, drawing attention to the West’s reluctance to find a solution to the crises in Syria and Egypt. “Unfortunately, we observe that while it could have been possible to look at numerous developments in our region with an objective, humane [and] conscientious eye, there is this irksome approach that distinguishes 'our funeral,' 'your funeral,' 'our murderer,' [or] 'your murderer.'”If Erdogan is sincerely troubled by this, why not take the same approach to the five killed during the Gezi Park protests, and consider what it means to reward police officers with bonus payments for their actions? For him, failing to even extend condolences to the families of those killed during the protests is doing the exact opposite of what he says — choosing between funerals.