UAE anti-defamation laws are again under scrutiny as the Indian man who filmed the assault is put in jail. 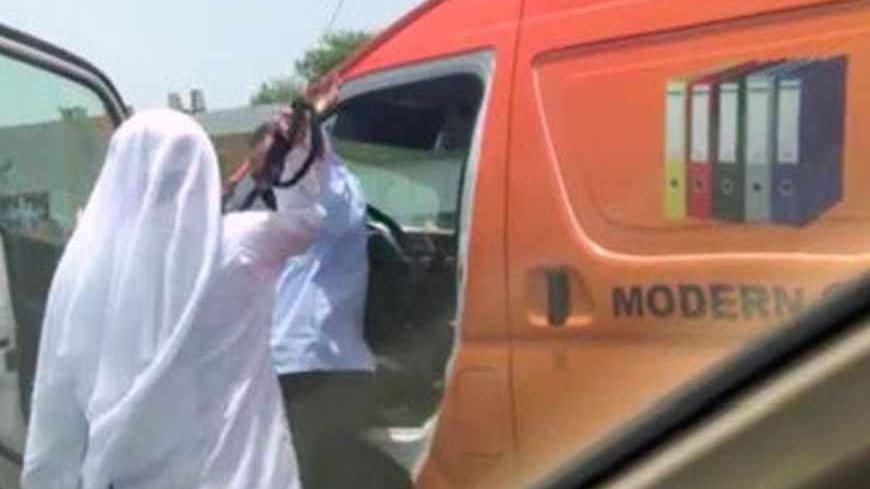 An Emirati official is seen beating an Indian motorist in the video captured by the victim, who has been jailed on defamation charges in Dubai. - YouTube.com

An Indian man who uploaded a video of an Emirati’s attack on a driver sits in a United Arab Emirates jail — a palpable sign of the region’s detrimental defamation laws as well as the country’s continued crackdown on social media freedom.

The video, recorded on a cellphone and uploaded to YouTube, shows the actions of an Emirati government official following a traffic accident. He walks up to the Indian driver, punches him several times and whips him with his agal, the rope that keeps the traditional Arab headdress in place. The humiliating beating lasts several minutes until another witness intervenes.

The video spread like wildfire on social media networks such as Twitter and Facebook as well the increasingly popular social media apps such as WhatsApp. Hundreds of thousands of people have viewed it on YouTube.

The YouTube viral video captured by an Indian man who has been jailed on defamation charges in Dubai.

After a few days of increasing media coverage (both inside and outside the UAE), Dubai police arrested the driver and charged him with assault.

However, police also arrested the Indian man who recorded and uploaded the incident. The arrest came after the Emirati man’s family filed a complaint with police alleging an invasion of privacy as well as defamation. According to local reports, the man who videoed the incident actually faces more jail time than the Emirati attacker.

Defamation in the UAE — as well as the entire Arab world — differs from international legal norms in several substantive respects. First, it’s a criminal charge rather than a civil legal issue (jail time versus a financial settlement.) More importantly, truth is not a defense against defamation in the Arab world.

Such an approach has a crushing effect on anyone wishing to record a crime or journalists working to uncover corruption. The approach allows anyone behaving badly to win a defamation charge by simply showing that a true depiction of his actions damaged his reputation.

International legal norms hold that truth is an automatic defense against defamation charges. The approach ensures that the public benefits from the exposition of defamatory behavior. No one should be allowed to protect a reputation that they do not deserve.

In an envelope-pushing editorial in Abu Dhabi’s The National, Emirati columnist Ayesha Almazroui said that the video had prompted a national debate. “Without the airing of such videos, people may not have had the opportunity to discuss this important issue so openly and express their opinions about it,” she wrote.

While a few Emiratis defended the attacker, one writer said the message from police is clear: “Next time you see someone being beaten in public, move along.”

By publishing the video, the Indian man also violated another part of the UAE legal code that clearly discourages similar forms of “citizen journalism.”

The UAE’s Cybercrime Law, revised in November 2012 amid a larger crackdown on social media speech, bans publishing via electronic networks any “news, electronic photos or photographs, scenes, comments, statements or information even if true and correct.”

Once again, the publishing “true and correct” information receives no special protection.

The revised law and the continued arrests of social media activists have had a palpable effect on public discussion in the United Arab Emirates. The once-vibrant Twittersphere has been chilled to a near standstill. Few Emiratis or expats in the country dare discuss or even retweet any news story that reflects poorly on the UAE. The video-beating case is a rare exception. Led by some of the newspapers, many people discussed the incident.

But in a more-representative case, a Norwegian woman reported a rape in Dubai and ended up under arrest for having “sex outside of marriage,” a crime in the Emirates. This story led to international outrage and particularly critical comments from the Norwegian foreign ministry. Despite the prominence, the local media ignored the incident and few people in the UAE discussed it via social media.

The first mention of the Norwegian rape case in Abu Dhabi’s Western-styled The National was the announcement that Dubai’s ruler had “pardoned” the woman so that she could leave the country. It has since published an overview article which downplays that it appears Dubai police urged the woman to drop her rape accusation. It also leaves out the four days she spent in jail after reporting the rape.

Cases like the video-assault arrest and the Norweigan rape charges are reminders that the Emirates’ public image as a tolerant, liberal society is at times out of alignment with its legal system. These incidents do great damage to the UAE’s carefully crafted image.

Perhaps prominent Emirati commentator Sultan Al Qassemi, a member of the Sharjah royal family, made this observation best on his Twitter feed.