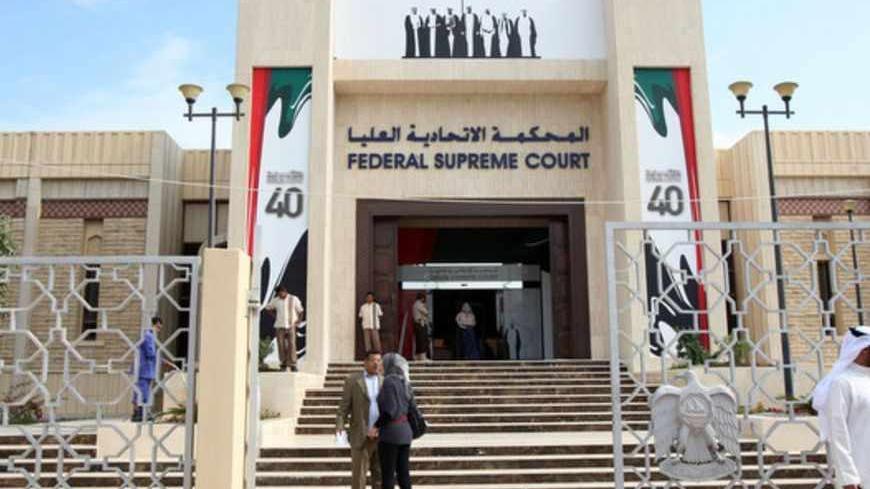 People stand outside the federal supreme court, where the verdict for five political activists was read out, in Abu Dhabi Nov. 27, 2011. - REUTERS/Nikhil Monteiro

An Emirati accused of spreading "false news" about the sedition trial in the United Arab Emirates lost his appeal on May 22 and will head to prison for 10 months.

An analysis of Abdullah Al Haddidi’s offending tweets shows he was engaged in criticism of the trial and providing information about the case to his followers.

Al Haddidi was charged with Article 265 of the Penal Code, which makes it a crime to describe a court hearing without “honesty and in bad faith.” In essence, the law makes it a crime to disseminate false news — and the police and courts decide what communication is truthful.

In countries with robust protections for a free press, laws against “false news” have been ruled incompatible with free expression. The truth, after all, can be subjective, and such laws have been used to suppress speech that governments find embarrassing or inconvenient.

On the charge sheet for Al Haddidi’s arrest, the police presented the 26 “bad faith” tweets. Al-Monitor has obtained the original Arabic tweets, and an English translation can be found here.

Ignoring for a moment that laws against “false news” go against international norms, a review of these tweets appears to find nothing more than criticism, dissent and valid information.

For instance, one tweet asks: “Why is there no information about the torture of Salem Sahouwa, Ibrahim Yasi and Mohammed Abdul Razzak, although it was mentioned in court?”

Local press reports did mention several times that defendants had complained of “torture” and generally abusive treatment while in detention. Given this evidence, such a question about probing the accusations of torture seems legitimate and certainly not rooted in any falsehood.

Another tweet complains that detainees were prevented from interacting with their lawyers: “Mohamad Al Rokn tried to give a paper to his lawyer and was prevented.”

Al Rokn, a respected Emirati lawyer, has been detained since July of last year. In 2011, he represented five activists calling for more democracy in the UAE who were convicted of insulting the president and other offenses. Not being able to communicate with his own lawyer seems like a key detail worthy of publishing.

Al Haddidi also asked why detainees were not given the right to ask questions of witnesses testifying against them. And some of tweets addressed the treatment of detainees: “They are handcuffed even from the courtroom to the bathroom.”

Other tweets don’t involve statements in the courtroom at all, but rather give the public information from the detainees:

“They are not allowed to meet in groups and discuss their defense; especially those who have legal background are isolated from the group.”

“They are under siege. They know nothing of the outside world: No television, no newspapers, no books.”

“The primary principle of a fair trial is that it is public, but they are restricting the presence of family.”

With these tweets, Al Haddidi is essentially filling in for the lack of coverage from the local press.

While English-language reporters have covered the trial with some candor, the press has not spoken to any of the accused, their families or their lawyers. This silence stands in contrast to the publicity the government enjoys to present its side of the story. Prosecutors release statements about the case via the state news agency that are carried by all the local outlets.

The disparity isn’t surprising, since UAE journalists have learned not to cross “red lines” in coverage, particularly any criticism or questioning of the state security apparatus.

The inclusion of the above tweets on the charge sheet is interesting since they don’t actually address anything stated in the courtroom — the only subject of Article 265.

On the whole, there don’t seem to be any egregious statements that are factually inaccurate in Al Haddidi’s tweets. Rather, it appears that he was simply reporting the situation as he saw it and asking questions about the procedures of the trial.

Protecting speech that is critical of the government is the foundation of many international court precedents as well as the United Nations International Covenant on Civil and Political Rights.

On a similar note, the UAE security forces recently arrested another Emirati on violations of the cybercrime law. Waleed Al Shehhi was charged under Article 28 of the recently updated law, which prohibits the digital dissemination of anything “with the intent of inciting to action, or publishing or disseminating any information, news, caricatures or other images liable to endanger security and its higher interests or infringe on the public order.”

The language in the law creates wide latitude for the police and prosecutors to criminalize virtually any critical speech.

The conviction of Al Haddidi and the arrest of Al Shehhi sends a message to everyone in the United Arab Emirates: "Criticize the government at your own peril."

The verdict of the sedition trial — which some observers say stems from critical comments on social media — may send a much larger message. That decision is expected on July 2.