The challenges of the second transition in Egypt will not be overcome by sheer force or security measures alone, but through prudence, restraint, a spirit of reconciliation and high moral standards. 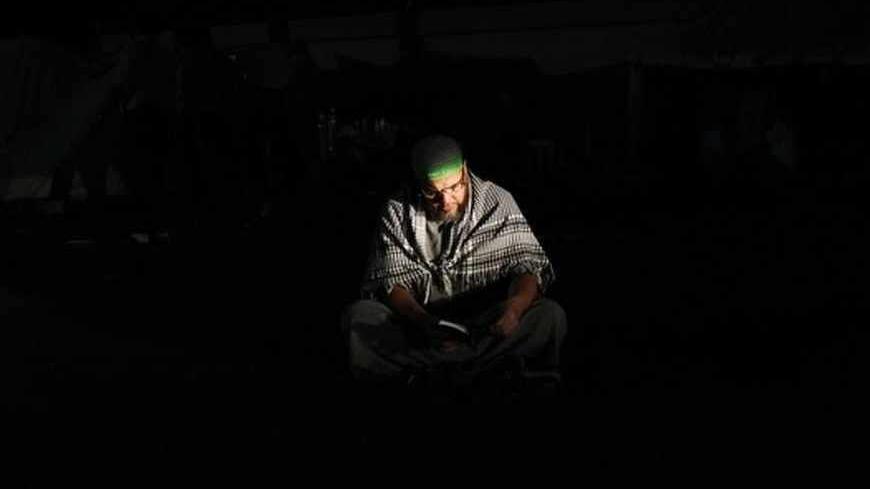 A supporter of deposed Egyptian President Mohammed Morsi reads the Quran at the Rabaa Adawiya square where Morsi's supporters are camping in Cairo, July 9, 2013. - REUTERS/Khaled Abdullah

At least 51 died and hundreds were injured when clashes erupted between the ousted president’s supporters and police and military forces near the Republican Guard Officers Club in Cairo, where Mohammed Morsi had been once held. The Muslim Brotherhood claims that the army opened fire at peaceful protesters while the army spokesman insisted that protesters attacked first, using guns and other weapons. This incident is likely to be repeated as the Muslim Brothers, jihadists and other Islamist militants vow to reinstate Morsi even if it costs them their lives. Mohamed el-Beltagy, a Muslim Brotherhood leader, said that terrorist attacks against army and police forces in Sinai will stop as soon as the “coup” is reversed. The grand imam of Al-Azhar, who was among national leaders present during Abdel Fattah al-Sisi's statement announcing the removal of Morsi, expressed great concern over the bloodshed and threatened to go into solitary seclusion if violence does not stop.

But the Muslim Brotherhood leaders seem willing to sacrifice more of their supporters’ blood to attract attention, gain internal and international sympathy and possibly improve their bargaining position. Muslim Brotherhood Supreme Guide Mohamed Badei appeared all of a sudden on the stage of the Rabaa El Adawya sit-in on July 5, 2013, one day after official reports of his arrest, urging protesters to sacrifice their souls for Morsi. As the Brotherhood and its supporters resorted to incitement and violence and are now seen to be linked to the attacks in Sinai, many Egyptians will initially tolerate, even demand, that the police and the army use harsh measures in dealing with Islamist protesters.

But the reality is that this is unsustainable to say the least. With more confrontations, the army and the police will be dragged into more and more bloody encounters, which in turn will generate more rage, calls for revenge and, hence, more violence, sending the whole country into a vicious circle of blood and hatred and deepening the crisis and the divisions.

Egyptians have very little tolerance for blood, cruelty and suffering. Appointing terrorists in key government positions, Islamists repeated threats and violence committed by Muslim Brotherhood supporters during the Presidential Palace demonstrations in December 2012. These were key reasons for the plummeting of the Brothers' popular support during the past few months. This is just who we are as Egyptians. Pretending that we have the moral "toughness," indeed ruthlessness, necessary to tolerate blood and use of excessive force would be self-deceit and eventually fail. Egypt’s diverse political taste often exists in the same family. The father could be supporting Islamists while the son backs liberals and the mother leans towards Nasserists! If one thing could be learned from Morsi’s failure, it is that it is not possible to eradicate or ignore any political faction. Using heavy-handed security measures to solve a political problem does not work. If the kind of fatalities and causalties which took place near the Republican Guard Club are repeated, no matter who is at fault, Egypt's transition will be sabotaged. With the rising toll of Egyptian blood, more and more families will be affected, and average Egyptian mothers and brothers will come on television overwhelmed with grief over the loss of their children and siblings. The country will be haunted for a long time. Support for the "recolution" will become thinner and internal divisions, even among partners, will surface.

The only way out of this is to break the cycle of violence and abide by a strict no-blood or at least no-fatality strategy. Ensuring the application of moral rules of engagement with high integrity and refraining from using excessive force is the only way to go. The goal of the police and the army should become restoring security and order and defending strategic targets while avoiding possible causalties. Lying about events does not work either. With mobile phones and digital cameras available to virtually everyone including bystanders, it is no longer possible to hide the truth or fabricate stories about attacks when none exist.

In the last 60 years, almost without exception, only wars with a universally accepted moral justification and conduct could be won. From Vietnam to Iraq, all wars which were based on pre-emptive excuses, intelligence cook-ups or misleading the public were lost at home even before they were lost on the front lines. Sustaining public consensus and support has become the most decisive weapon. Cruelty and lies lead to weakened public support, demoralized troops and eventual defeat. And here we are talking about wars between enemies, let alone political divisions between fellow countrymen.

This is a political dispute and therefore can only be resolved on the long term through political means, rather than security measures. Compromises made to Islamist factions remaining at the table, such as Al Nour Party, are crucial, even if the party members and supporters are actually siding with the Muslim Brotherhood wholeheartedly now. Concessions are likely to get them back or at least defuse their anger. Al Nour Party for instance, rejected the nomination of Mohamed ElBaradei as prime minister, so Justice Mansour, the interim president, appointed instead Hazem El Beblawi. Many revolutionaries were outraged because they feel  Al Nour is “riding the wave” and was not a part of June 30 revolution, just as the Muslim Brotherhood did in the first revolution. Al Nour may not be a part of the second wave of the revolution, but it can hopefully be a part of the way out of the current impasse. It is also crucial to immediately start the processes of national reconciliation and transitional justice. The public sentiment, especially in local media, against the underground nature of the Muslim Brotherhood organization and its disregard of Egypt’s interests and national security may be justified. But most members and supporters are just average Egyptians who knew little or nothing of the intricacies of its clandestine web. It is important to make this distinction, end the demonizing, win Brotherhood members back and integrate them in the political process.

Elections must also be held relatively soon, in order to restore legitimacy. But it is crucial to develop laws and regulations which will ensure that the elections will this time bring out results that represent the people, and not just rich parties and candidates exceeding the campaign spending limits by manyfold. It is important to enforce legislation which requires that political parties get their decisions from their members rather than be mere subsidiaries of some underground organizations or corrupt networks. The mistake of allowing the formation of a party which is a “political arm” of some other secret organization operating in multiple domains should not be repeated.

The challenges of the second transition in Egypt will not be won over by sheer force or security measures alone but rather through prudence and restraint. The last man standing will be the one who has the least blood on his hand, yet stood his ground. It is a difficult combination, but these are the ground rules for victory in Egypt's moral test.

Wael Nawara is an Egyptian writer and activist. He is also a co-founder of Al Dostour Party and was a visiting fellow at Harvard’s Institute of Politics. On Twitter: @WaelNawara