Is This the End of an Era For the Muslim Brotherhood?

Egypt's interim government is threatening to dissolve the group and place it on the terrorist list. 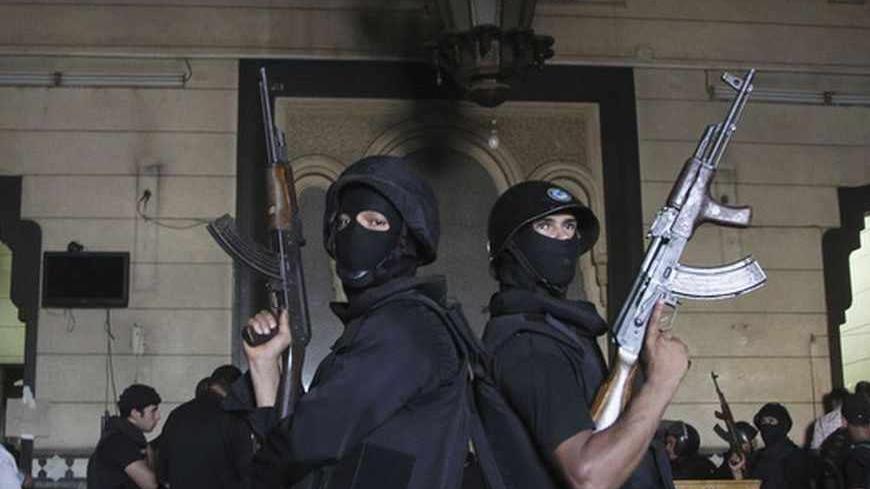 Policemen stand guard inside a room of the al-Fath mosque when supporters of deposed Egyptian President Mohammed Morsi exchanged gunfire with security forces inside the mosque in Cairo, Aug. 17, 2013. - REUTERS/Muhammad Hamed

The interim Egyptian government is threatening to ban the Muslim Brotherhood and place it on the terrorist organization list in Egypt. Blaming a defiant Brotherhood for the deadly confrontations, attacks on churches, police stations and government buildings, Egyptian Prime Minister Hazem el-Beblawi proposed dissolving the group. The Brotherhood’s assets may be confiscated, operations prohibited and membership criminalized. This move could usher in mass arrests of members countrywide. If considered a terrorist organization, the Brotherhood will be excluded from the political process. How did we get to this point and what does this mean to hopes of returning to calm and an end to violence in Egypt.

Few people know that the Muslim Brotherhood organization had always been banned in Egypt since 1948. After several assassinations and bombings which took the lives of several prime ministers, judges and even disavowed members of the Brotherhood itself. The long list included Ahmed Maher, al-Nokrashy, al-Khazendar and Fayez Halawa. In 1954, the Brotherhood made an attempt on Gamal Abdel Nasser, then Egypt’s prime minister. Following that, many of the Brotherhood leaders were arrested and received long prison and even death sentences. In the 1970s, Sadat allowed the Brotherhood and Islamists to regroup in an effort to use them against Nasserists and socialists as the group had been used in the 1940s, against communism. It was ironic for Sadat to be killed at the hands of Islamists in 1981. Most Islamist terrorist organizations that  exist in the world today are spin-offs of the Brotherhood which was never legally resurrected since the 1950s. In Egypt, the Brotherhood started again to operate as a clandestine organization owning businesses, manipulating unions and syndicates, operating charities often linked to mosques and also having its own militias. Money poured from local and overseas operations which the Brotherhood had in 80 countries. Despite having no legal political party, the Brotherhood was allowed by the Mubarak regime to field candidates in parliamentary elections since 1983. In 2005, it managed to get around 20% of the seats.

After the January 2011 revolution, the Muslim Brotherhood was allowed to form a political party, the Freedom and Justice Party (FJP), without being asked to review the legal, or rather illegal, status of its clandestine cancerous operations. Combining a legal party with a secret international organization, meant that the Brotherhood could have the best of both worlds and enjoy tremendous financial and organizational advantages over its political competitors. Utilizing the Brotherhood’s strong organizational capabilities and vast financial resources, FJP managed to get 46% of the parliament’s seats and their presidential candidate, Mohammed Morsi, earned 25% of the votes in the first round and 52% in the run off. Here is where things get a little weird.

Even after the Brotherhood reached power, it made no effort to legalize its operations, or even separate the FJP from the Brotherhood. The spiritual leader of the Brotherhood, which had no legal standing as a political party, or any legal entity for that matter, continued to set the political directions of the country, meet with foreign leaders, direct the parliament and tell Morsi what to do. Gradually, Egyptians realized that the illegal Muslim Brotherhood organization was the real ruler of Egypt while Morsi was no more than a façade, a mere representative of that organization in the presidency. Protests would often chant for the downfall of the “Morshed”, Mohamed Badei, the supreme guide of the Brothers, now in custody under investigation for his alleged role in ordering the killing of protesters, and not Morsi, whom as they came to discover was a puppet figure at best. In March 2013, after tremendous public pressure, the Brothers filed to register a charity under the name “The Muslim Brotherhood.” But on the books, none of the businesses owned by the Brotherhood appeared on record, since it is illegal in Egypt for political parties or NGOs to own businesses.

Does the government wish to dissolve the Brotherhood? A month ago, that decision was probably still under review, pending the Muslim Brotherhood clarifying its “strategic intent.” Did it aim to improve its leverage and bargaining position in the political process, or is the Brotherhood set on regaining control of the country at all costs and using all possible weapons and scenarios, including destroying the Egyptian State? As the Brotherhood annexed kilometer after kilometer, expanding Rabia’s sit-in until it controlled an area of a big town, the National Defense Council convened and realized that these actions on the ground all added up to one dangerous conclusion. The government kept asking the question “what is the Brotherhood strategic intent?” to everyone who went and met with the brothers, including EU and US intermediaries. And they came back invariably with the same answer, the Brotherhood insisted on the return of Morsi and even restoring the Shura Council. The uncompromising rhetoric of defiance broadcasted live from Rabia and Nahda stages suggested that the Brotherhood was set on an Armageddon-style confrontation. But the government still waited.

The Brotherhood’s PR strategy seemed to rely on maximizing the death toll as to enforce its position as the victim and win the public’s sympathy thus warranting international intervention. US and EU criticism of the Egyptian government may have been interpreted by the Brotherhood as “stand your ground and give us more corpses and we'll send the troops, Libya-style.” That was the wrong bet. By early afternoon on Aug. 14, it seemed that the government was losing. Egypt was losing. The death toll was rising and a few thousand more protesters were pushing in trying to merge with the sit-in. ElBaradei resigned. Egypt was to be held by the throat. The government allegedly used “excessive force,” but still could not break the sit-in. Even after the sit-in was cleared, the high number of fatalities with news of fresh demonstrations announced for the following Friday suggested that the interim government had lost it. The Turkish prime minister was in a frenzy making calls demanding a Security Council emergency session to see what should be done to control the situation in Egypt. The international Brotherhood organization and its allies in Turkey and Qatar started to call for international intervention in Egypt. EU foreign ministers were to meet where news of potential suspension of EU aid to Egypt was leaked. The Brotherhood plan was to maximize the chaos and death toll as to warrant international intervention in Egypt. These actions, when put together, again pointed to one thing: the Brotherhood strategic intent was not to be a part of the political dialog, the Brothers seemed set on destroying the State of Egypt.

And while news came of a wave of attacks on Egypt’s churches and Christian community, the Muslim Brotherhood’s spokespersons in Western media started to play the “Good Terrorist, Bad Terrorist” argument, suggesting that it was better to accept the Brotherhood with their low level of violence so as not to risk radicalizing more Islamists and ending up with really violent factions. But it was difficult to sustain a victim PR strategy for long while the Brotherhood and their supporters were torching churches and massacring police officers. On Aug. 17, the world started to see a different reality from the al-Fath mosque standoff. The famous picture of an army soldier trying to push the angry crowd aside as to provide Muslim Brothers with safe passage out of the Ramses-square-located mosque said it all. It confirmed what many Egyptians have been trying to tell the world for weeks, but they were ignored by Western analysts and media. Throughout previous weeks, Western media made the limited protests of the Brotherhood look much bigger and influential. It portrayed a poetic picture of peaceful democrats who protested to ask “what happened to my vote?” The media wanted to believe that these protesters represented the sentiments of the majority of Egyptian people rising against the evil generals of the army who had plotted a coup against an elected president. But now the truth was emerging. The reality on the ground showed that Muslim Brothers, throughout the past few months, were increasingly unable to face Egyptians, let alone rule them.

During the past two weeks, the Brotherhood rhetoric materialized into bloody scorched-earth tactics. With a “rule it or ruin it” attitude, the Brotherhood and their allies waged the most threatening assault that the Egyptian state has faced in its recent history. The Brotherhood and their supporters attacked many police stations, in some cases slaughtering every policeman on site and mutilating their bodies. Over 50 churches were attacked in a campaign which also targeted missionary schools, shops and even the homes of Christians. Government buildings, military installations, police and army personnel were also attacked. On Aug. 19., 25 police conscripts were captured in Sinai, their hands were tied and they were made to lie on the ground face down where they were machine-gunned down.

Revealing this malicious strategic intent may have sealed the fate of the Muslim Brotherhood organization in Egypt. During the past few days, most of the leaders of the Brotherhood organization have been arrested on charges of killing protesters. We should not be surprised if these charges were amended to include treason or conspiring to carry out activities that threatened the country’s national security.

It is inconceivable that the Brotherhood will take any part in Egyptian politics in the near future. But how will Egypt accommodate the two or three hundreds of thousands of members of the organization in Egypt? And how about their supporters, another two to three million? The Salafists seem to eye that void with interest but can they fill it? Can Islamist youth regroup while new parties emerge with ideologies which can co-exist with the Egyptian state? What does this mean for violence in Egypt in the coming days, weeks and months? These are all questions which are very much related. Unless these supporters are offered alternative channels adequately representing them, the country can never find peace. Lower ranks of the Brotherhood must also be offered the opportunity to make “revisions” and granted a way out or they will become a destructive force in society.

Such a subtle and intangible thing, intent. But in the Muslim Brotherhood’s case, it was its strategic intent which had sealed the group’s fate. As Egyptians watched the horrific scenes which confirmed the group’s intent to destroy Egypt since they could no longer rule it, they shock their heads in utter disapproval and turned the Muslim Brotherhood’s page, signaling the end of an era.

by Murielle KASPRZAK and Joseph SCHMID | AFP | May 26, 2022
END_OF_DOCUMENT_TOKEN_TO_BE_REPLACED