The United States has the only leverage left over Egypt’s military, and must use it to save the country from civil war. 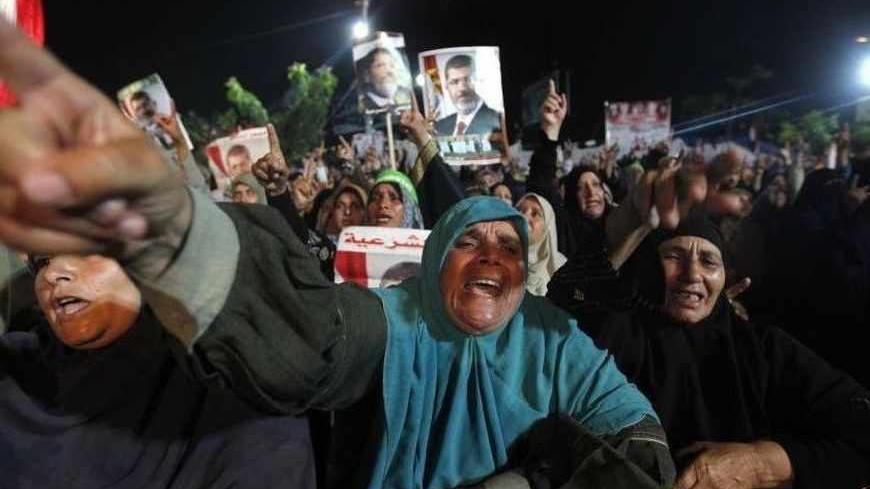 I grew up as a teenager in Alexandria, back in the 1960s. My favorite place there was next to a small mosque named after Al Qaed Ibrahim Square by the beach, where we used to relax in the serenity of the cool sea breeze, listening to stories and dreaming of what could be as teenagers often do. I left more than 40 years ago. By those very same marble steps today is a battleground I never imagined the city would have to witness.

The leader of the recent coup-d’état in Egypt, Gen. Abdel Fattah al-Sisi, has called for popular support to fight those he has deemed “extremists and terrorists.” His call for Egyptians to demonstrate against the supporters of the first Egyptian president to be freely elected in its modern history has been criticized by neutral observers inside and outside Egypt. The opponents of Sisi have occupied the square of Rabia al-Adawiya in Cairo for the past four weeks with numbers oscillating between half a million during the day to nearer 1 million during the night, demanding the release and reinstatement of the elected president Mohammed Morsi; hence the army’s push for counter demonstrations, which have resulted in scores of deaths, and a clear warning for Morsi’s supporters to disperse or else.

The stakes are getting higher by the day if not the hour. More than 100 lives have already been claimed in the last week or so. The Tahrir Square phenomenon, the Arab Spring, hailed as a prosperous new era for the people of the Middle East and North Africa, appears to be heading for an ugly finale.

By these old marble steps in Alexandria, I was told a story from biblical times. Solomon the Wise threatened to cut a baby into two halves to settle a dispute between two mothers who each claimed the baby her own. In a beautiful act of humanity, the real mother withdrew her claim, to save the baby’s life and avoid bloodshed. Today there are millions of genuine ‘mothers’ outside of Tahrir, who are weeping and fearful at the gradual division and ultimate loss of their country’s future. The Algerian civil war in 1991, where the military stepped in and the ballot box was abandoned and massacres ensued, taught us this very same lesson. Over 200,000 lives were later lost. The Arab world and, we in the West, are in desperate need for an initiative of similar magnitude to that of the real mother to avoid bloodshed. Regardless of which side one falls on, a country that stood together so triumphantly less than two years ago is now on the brink of civil war.

No fair-minded person can deny that mistakes weren’t made by the elected president and his cabinet. Morsi himself admitted this. He came to power through a narrow win at the ballot box and naively thought that he could complete his term in office unopposed. The people who made it possible for him to be the president, with perhaps some justification, invoked their right to terminate his time in office prematurely. But does the army have the right to throw the decisive punch in a debate at the ballot box? Liberal democracy is not utopia, and we must deal with its drawbacks carefully. The Egyptians, electors and elected, need to learn how to practice some form of democracy without resorting to the rule of the gun.

The Islamic-oriented parties in Egypt and elsewhere in the Arab world need to realize their loss began before they started. The masses’ needs and aspirations, food, security and in turbulent times, also laughter and music were often sidestepped by rhetoric. Didn’t they notice a few weeks ago that Arabs across the whole region stayed up by the millions to vote for Mohammed Assaf, a young Palestinian singer from the Gaza Strip, to be their Arab Idol for the year? You cannot force religious dogma or rule by shoving it down people’s throats. This was a lesson for the elected government of Hamas, but also to the Israeli occupying forces: That life in its entirety, music included, will go on no matter how much military might one has at their disposal to parade and at times cowardly employ against civilians.

The world desperately needs a democratic Egypt to transpire to act as a marker for the Arab world. The loss of life in Syria and stalled transition in Yemen, amid more turmoil in Tunisia and Libya, has only cemented this fact. What message does the international community send to the region if it allows Egypt to descend into another army dictatorship with our tacit blessing, and more than $1.3 billion in US military aid used to suppress a section of society? The dream of the Arab Spring where ideas and voices counted for more than the might of the gun is on the verge of collapsing. That we have failed to answer the tears of the ‘real mother’ witnessing her beloved baby called “freedom” being massacred.

The call for further military action by Sisi leaves a very real possibility of a civil war between two very polarized camps, with no space for reconciliation. The international community, and particularly people in Capitol Hill, must play a decisive role. As the main financier of the Egyptian military, the United States is, in fact, the only real player left. There must be unquestionable restraint on the side of the army in its dealings with a now marginalized political bloc, as well as arbitration between the various camps in the “street.” The human rights of all Egyptians must be respected, regardless of which side they are on. If the Egyptians turn on each other, then bloodshed ensues and we lose the baby. One side must come forward and volunteer herself as the real mother to save the country from collapse. Will we be there to help her?

Mohamed El Gomati is a professor of electronics at the University of York and adviser to a number of global institutions, universities and charities. He is also the chairman of the Foundation for Science Technology and Civilisation, and winner of the Fazlur Rahman Award in 2009. Gomati was awarded the OBE for his services to science in 2012.