Turkey struggles to find the right response to the military coup in Egypt. 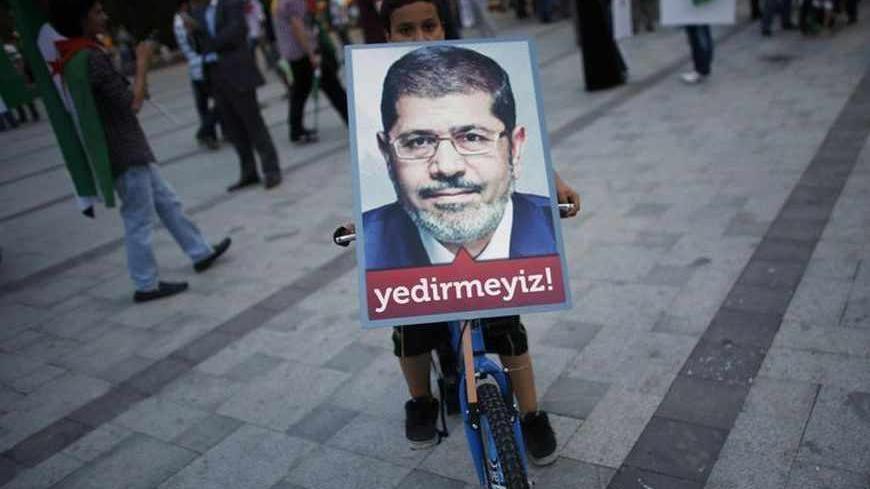 Despite the obvious differences between the two countries, Turkey felt the political shock waves of the military coup in Egypt much more than any other country, due to its own conflict between secularists and Islamists. From the moment news of the coup broke, Turkish politicians, columnists and members of the public adopted strong positions based on where they stand in the midst of this growing divide.

No one supports the coup, of course, since this would be politically incorrect in a country whose own past military takeovers are widely condemned. But it is clear that the secularist camp is much more understanding of the reasons behind the events in Egypt than the Islamist camp.

The anger among Islamist supporters of Prime Minister Recep Tayyip Erdogan’s Justice and Development Party (AKP) toward those who carried out this coup is tangible and vocal. The bottom line for AKP supporters is that ousted Egyptian President Mohammed Morsi is a victim of the enemies of democracy, pure and simple.

Clearly, there is more to it than a simplistic “majoritarian” interpretation of democracy. At any rate, it is obvious that the coup in Egypt has once again raised the specter for Turkey’s Islamists of being shut down by the military, though this is highly unlikely at this stage. Erdogan’s principle mission since coming to power has included clipping the political wings of the military and he has made serious headway in this regard.

Today, a large number of officers, including a former chief of the general staff, are in prison and standing trial for allegedly trying to undermine the AKP’s legitimate rule by illegal means. Only a few days ago the AKP came out with a bill aimed at amending Article 35 of the military’s “Internal Service Code” in order to do away with any grounds or incentives for a military intervention in the political domain. Article 35 effectively makes the military the guardian of Turkey’s secular order and has provided a basis for four coups in the past.

But the specter of military intervention that Egypt has evoked is not the only problem for Erdogan and the AKP. The Egyptian military has also dealt a serious blow to the unofficial Muslim Brotherhood fraternity and its international agenda, with which AKP members and followers sympathize.

The blow comes at a time when this fraternity has been making headway against secularists in various countries in the region, first by coming to power, and then by pushing Islam-based legislation through their respective parliaments with little regard for social diversity.

Shortly after his election, Morsi gave himself extraordinary powers and fashioned a constitution based on Islam in this manner. Erdogan is accused by Turkish secularists of attempting the same, given his desire to draft a constitution based on the AKP’s parliamentary majority, which, among other things, would enable him to become president in 2014 with extraordinary powers.

Egypt, however, provides an example now of how much social unrest this majoritarian imposition can cause, even if the country involved is predominantly Islamic. The fact that Erdogan cut his holiday short, and rushed to Istanbul on July 4 for a three-hour emergency meeting on Egypt with key members of his government, is noteworthy in this respect.

Sources close to the government sounded out by Al-Monitor remained tellingly silent when asked if the possible domestic ramifications of the images from Tahrir Square, coming as they do at a time when anti-government protests are continuing in Turkey, were also discussed during the emergency meeting. It is unlikely, however, that this was not discussed.

Meanwhile, it was inevitable that the opposition should latch on to the coup in Egypt to issue political warnings to Erdogan about Turkey. Kemal Kilicdaroglu, the leader of the main opposition Republican People's Party (CHP), underlined in a press statement that the Egyptian military’s intervention was unacceptable.

He nevertheless added that those who consider democracy to be solely represented by the ballot box should now see their mistake. “Those who govern the country have to lend an ear to everyone’s demands. To remain indifferent to these demands, to not see them and say ‘I have the majority of votes; I can do what I like’ is no longer valid in our day,” Kilicdaroglu said.

Devlet Bahceli, the leader of the Nationalist Movement Party (MHP), who rarely comments on world affairs, did not waste time in commenting. “The unfavorable developments and costly experience in Egypt must be read well by the AKP government, and lessons from these must be drawn,” he said in a statement. He too indicated that the coup in Egypt was unacceptable, but underlined that Morsi was not blameless.

A further blow to AKP officials was to see key members of the established Sunni order in the Middle East, from Mahmoud Abbas, the head of the Palestinian Authority, to Saudi Arabia’s King Abdullah, actually welcoming the ouster of Morsi by sending messages of congratulations to Adly Mansour, who was appointed by the military as the head of Egypt’s transitional government.

Having remained silent for two days, Erdogan spoke out on July 5 during an address in Istanbul to a group of Turkish scientists. He expressed his views on the coup without going into his usual paroxysms of anger. By employing a didactic tone, he exhorted Egyptians “to study Turkey’s recent history well,” turning the tables on those calling on him to learn from developments in Egypt.

“Turkey’s experience is there to be seen and we would not want any other country to live through these things. Decades were lost by Turkey after coups. Every military coup crippled Turkey’s economy,” said Erdogan in his live televised remarks.

While remaining curiously silent on the coup's support in the Middle East, Erdogan did not waste the opportunity to take a dig at the West and accuse it of double standards. “At the moment I am surprised at the West. The West has still not been able to call this a coup,” he said cynically. He conceded that Morsi may have made mistakes, but stressed that the manner in which to deal with him was through the ballot box.

Turkish Foreign Minister Ahmet Davutoglu's statement on developments in Egypt pointed out that whatever the reasons behind recent events, it was unacceptable that an elected government should be toppled by means of a military coup. He nevertheless appeared to give the Egyptian military the benefit of the doubt. Not putting forward any demand for Morsi to be reinstated as the democratically elected president of Egypt, Davutoglu said, “It is necessary for the sake of Egypt’s political stability and social peace that free and just elections be held as soon as possible, and for democratic mechanisms to be operated.”

It is clear that Erdogan and members of his government have been seriously shaken with this unexpected turn of events in Egypt. It remains to be seen how they will react once the dust settles. Some argue they will become more radical in tone, and create new enemies for themselves in the Middle East in the process. Others. However. predict that they will become more moderate in order to prevent any impression that Turkey is also going the Egyptian way, with increased social unrest due to the government’s policies.

Whatever the case may turn out to be, it is certain that the Egyptian coup has unsettled Turkey’s Islamists, while providing secularists with new arguments. Time will tell which side is more democratic in the final analysis.