A first-hand account from the Bir el-Abed neighborhood in Beirut's southern suburbs, the scene of a bombing today, July 9, which injured 53. 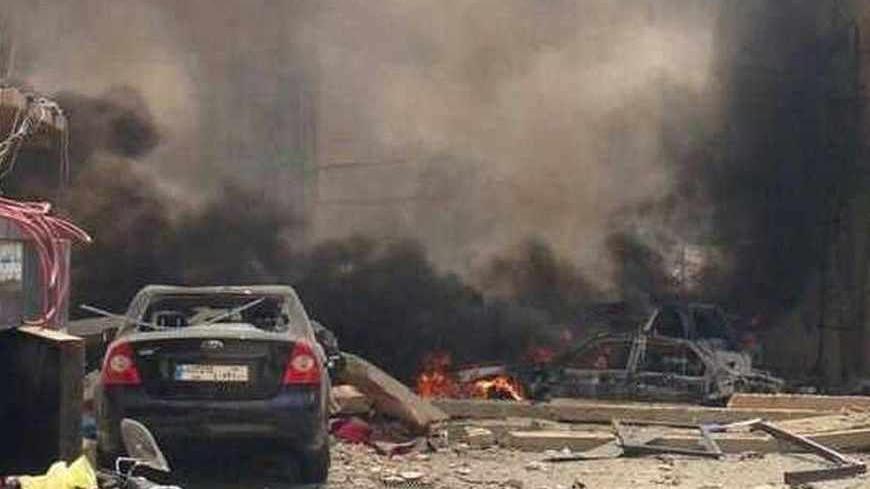 An amateur photographer caught this image minutes after the bombing in the Bir el-Abed neighborhood, a Hezbollah stronghold in Beirut's southern suburbs, July 9, 2013. - Ali Hashem

In a moment, life in Bir el-Abed neighborhood came to a stop. It was an explosion that made the busiest street in Hezbollah’s stronghold, Beirut's southern suburbs, look like a war scene. Shattered windows were everywhere, and the rebuilt buildings that were destroyed in the 2006 war with Israel looked as if they were recalling their old tragedy.

Nobody was killed in the explosion in a public parking lot of the Islamic Coop supermarket, said Lebanese Health Minister Ali Hasan Khalil, who spoke to journalists while visiting the blast scene. Health officials told Al-Monitor that 53 people were injured, many of them slightly.

Many Lebanese officials visited the bomb scene, including Lebanese Interior minister Marwan Charbel. Charbel was attacked by angry men who blamed him for being soft in dealing with Sheikh Ahmad Assir. Hezbollah helped the minister flee the neighborhood, while supporters and residents went to the streets raising the pictures of the group’s leader Sayyed Hassan Nasrallah and chanting slogans.

“This is not to be mentioned if compared to the 2006 war, we are with Sayyed Hassan even if our houses were destroyed, and our children killed,” said Um Samih while staring at the explosion scene. “We know who did this," she elaborated. "They think this will make us leave Hezbollah, they don’t know us well."

Yousef is another person I met in the area. He said, “Well, I don’t pray, I’m secular, I drink, but I’m ready to die for Hezbollah.”

From the first hour after the explosion many started speculating. I asked a Hezbollah official if the attack was aimed at any Hezbollah personnel. He replied, “The bomb was aimed at people.” According to security sources in Beirut, there were two timed bombs, and they were to explode after each other, not together.

“The perpetrator wanted the first bomb to call attention and attract people to the scene and then the second bomb would explode, luckily both bombs exploded together,” the Hezbollah official said. He told Al-Monitor that investigations are still underway, but revealed that a suspect was arrested and was under interrogation: “I can’t say anything about the suspect, his identity, nationality; if he is the right person then everyone will know.”

Hezbollah, the Lebanese army, and Lebanese internal security forces were all at the explosion scene. There were measures taken in the area, passages to the parking lot where the blast occurred were closed, and a blue tent was erected over the 1.2-meter (4-foot) hole that was caused by the explosion. A security source told Al-Monitor that both bombs together weighed 40 kilos (88 pounds): “The power of the explosion hit the surrounding cars and that saved tens of people from being killed.” He added, “The perpetrators are professional, and we can’t rule out any option.”

A source close to Hezbollah indicated that there are several possibilities on the table: “The Israelis might be behind the blast, the takfiris, Syrian opposition forces, the group is having its separate investigation, but for sure this is probably a new level.”

The source has lived in the area since the late '70s; he remembered how Bir el-Abed was struck in 1985 by a similar explosion that was blamed on the CIA and was aimed at the late charismatic Shiite cleric Sayyed Mohammed Hussein Fadlallah. “The tools are different but the mastermind is one,” he said.