Arab rappers reflect on Ramadan and the events of 2013. 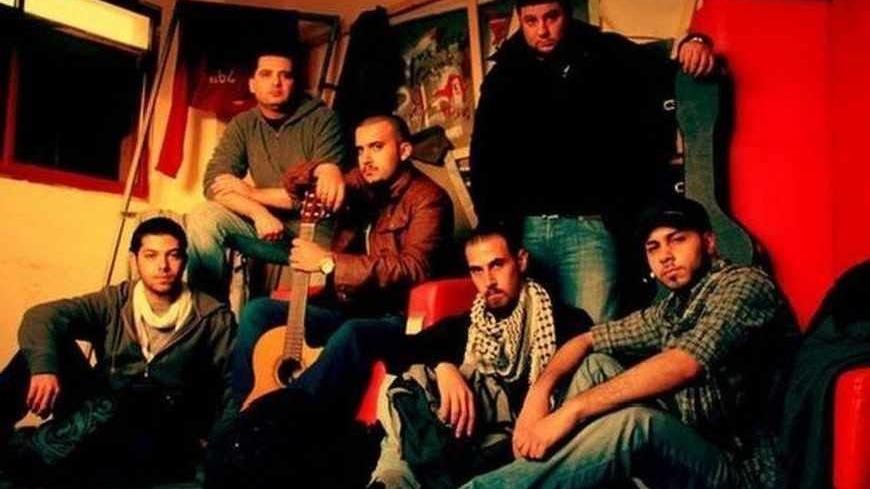 During Ramadan last year, the four rappers from the Syrian group Refugees of Rap were sitting with their families in Yarmouk camp in Damascus, listening to the bombs fall, watching the news and writing lyrics. Yaser Jamous and his younger brother Mohammad, Ahmed Zarouk and Mohammad Jawad grew up in the Palestinian refugee camp and started making music together in 2005, spending most Ramadans together.

This year, the brothers are in Europe, Zarouk is in Iraq with his wife and Jawad is still in the camp trying to arrange for his family’s safety and hoping to rejoin the group. Although Yaser and his brother are now safe and can finally perform again, Yaser said they would prefer to spend Ramadan in Syria.

“Last year, I was in my home living the revolution with my family within the atmosphere of Ramadan. Here, I’m just with my brother and we are moving from place to place,” he told Al-Monitor. Since they are constantly in motion, moving between France, Denmark and Sweden they decided to postpone the fast until things stabilize. Although they observed the fast in previous years, it has been three years since they celebrated Eid al-Fitr, a massive celebration that marks the end of the holy month. In 2012, the group was invited to perform in Jala Stadium in Damascus for Eid, but they decided against it.

“Eid is about being happy, how can you go and party while people are dying,” said Yaser who feels guilty about having left Syria. “We feel we didn’t do anything for this revolution. We have to release this album to get our fans to know our real viewpoint.” But with Jawad still in the camp amid heavy fighting between government-supported forces and the Free Syrian Army, they hesitate. So, they continue their efforts to reunite in France one day soon, where they can finally release their long-awaited album — which they have yet to release, fearing retaliation for the critical lyrics against the regime.

Khaled Harara, a Gazan rapper in Palestinian Unit, who is now based in Denmark, is in a more stable place than Yaser and Mohammad.

“Ramadan for me this year is only about fasting,” said Harara, who was recently accepted to a music and writing program in Sweden, “I miss my mom, family, food, friends and knafeh, [but] I don't miss Hamas and the borders and all that s---. ... My plan now is to start my life as a normal human being in Sweden.”

His partner in Palestinian Unit, Ayman Mghamis, is still in Gaza City, but says he is experiencing his best Ramadan.

“In fact, this Ramadan is the first time my family and I have felt happy since the 2008-2009 massacre in Gaza,” Mghamis said, who lost his father when an Israeli rocket destroyed their house. But last month, Mghamis became a father to a baby girl.

“It is amazing how God can take someone special in one moment and suddenly an angel is sent from that same God to open doors for the future and for life.” He said that Palestinian Unit is planning to do hip-hop events and vocal and music education after Ramadan.

For Mohammed Antar, another rapper from Gaza, this Ramadan is also one of his best, but for a different reason. He recently moved to Cairo with his family’s backing and is relieved to be away from Gaza.

“Gaza is like hell,” he said, blaming politicians, the police and security forces for the situation. “They are always asking the same stupid questions such as who is financing me or telling me how a real Muslim should behave. Here, I can say what I want,” he said about Egypt. He arrived just as President Mohammed Morsi was ousted. He took part in the Tamarod movement, saying, for him, protesting the Muslim Brotherhood in Egypt is protesting the Hamas-led authority in Gaza. “I feel that I am a part of this one,” he said.

Ramadan in Egypt this year has been a particularly fraught one as anti-Morsi and pro-Morsi protesters continue to spar.

Wara2a B-100, a hip-hop group from Alexandria who made the official campaign song for the Tamarod movement that called for the overthrow of Morsi, is not having a joyous month, despite their success.

They have received a lot of criticism from Morsi supporters who post comments such as “Are you even Muslims!?” and “They're Muslims and fighting the Muslim Brotherhood, how come?!" on Facebook, which has done little to deter them.
“We called for this overthrow, and we would call for it again if we were back in time,” they told Al-Monitor.
One strong Morsi supporter, Abdullah Elshrif, is a spoken word artist who performs without music. In a recent video published on June 25, he says Egypt is suffering from Islamophobia.

For the Libyan rapper Malik L, this Ramadan is only his third spent in Libya. He grew up in a political dissident family in Washington and returned to Benghazi at the beginning of the revolution in 2011. During that Ramadan, the country was at war.

“The electricity would cut off daily for about four hours. This Ramadan, the electricity cut off so far for only one hour,” he said, but added that prices have gone up. The economy is tough on a lot of families, the rich maintain while the thieves get richer, and the poor do not have many opportunities,” he said.
Malik L doesn’t practice music during Ramadan, but spends his days doing the five daily prayers, relaxing, running errands and breaking fast with friends and relatives.

Ihsen Kammoun — or Da Sole — a Tunisian rapper, left his country a few months before the 2011 revolution. He now lives in California with his American wife and says this Ramadan he is trying to pass the traditions on to his 2- and 5-year-old sons.

“It's kind of hard because the whole charm and character that Ramadan has in a Muslim country is absent here,” he said. He has been donating to Islamic Relief, which provides food for families in need in Africa and the Middle East.

WMD, Da Sole’s partner, stayed in Tunisia though. Ramadan was a little sour this year because of the soaring prices of food, clothing and transportation. In addition, opposition leader Mohammed Brahmi was assassinated right in the middle of the holy month of fasting.

“I think Tunisia is going through a very hard time right now, but ‘with hardship comes ease’ as Allah says in the Quran,” said Da Sole.

Janne Louise Andersen is a New York–based Danish journalist who specializes in the Middle East. She has written for Rolling Stone Middle East, The National and various Danish media such as Gaffa, Opinionen, Weekendavisen and Politiken. On Twitter:@jannelouisa