Is the Aoun-Nasrallah Alliance Stagnating?

As relations between Lebanon’s Free Patriotic Party, led by Gen. Michel Aoun, and Hezbollah appear to be stagnating, both sides take time to reflect on the rationality of sustaining Lebanon’s first Shiite-Maronite coalition. 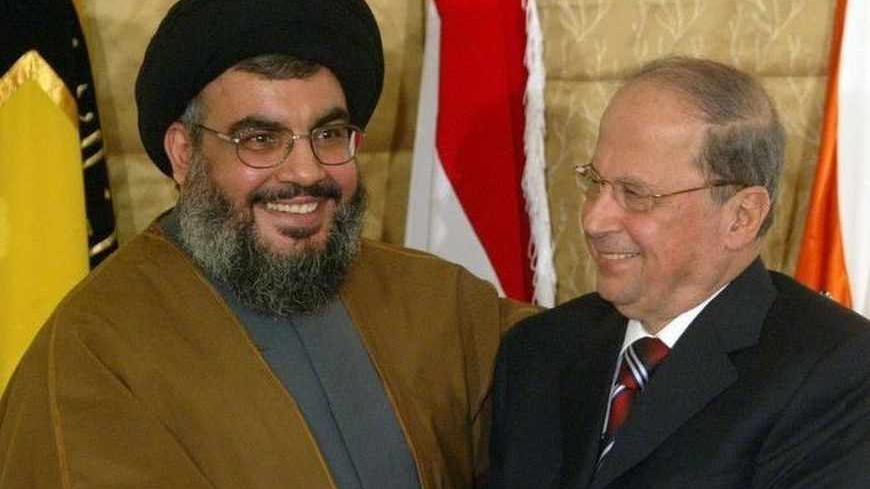 Behind the scenes, attempts are under way to stop the atrophy and ambivalence setting in to the relationship between the Free Patriotic Movement (FPM), led by Gen. Michel Aoun, whose bloc includes the majority of Christian MPs, and Hezbollah, the most powerful Shiite organization in Lebanon.

The two parties have been close allies since 2006, when Aoun and Hezbollah Secretary-General Hassan Nasrallah signed a memorandum of understanding at the Mar Mikhael Church in Beirut. The agreement is the first alliance of its kind — between a powerful Shiite party and a Maronite party — since the founding of modern Lebanon. It had been common in the Lebanese political tradition for the Maronite president of the republic to ally with the Sunni prime minister for the administration of presidential mandates during the First Republic. This was simply because authority was administered through a harmonious, working relationship between the Sunni prime minister and the Maronite president while other religious groups, including Shiites, would join the Sunni-Maronite alliance or oppose it, depending on the political circumstances of the time.

In principle, the Aoun-Nasrallah alliance during the Taif Republic (Second Lebanese Republic) was an exception to the customary Lebanese alliances for governing. The arrangement has been beneficial to both parties in that they built a strong alliance against growing Sunni power in the governance equation. The Sunnis gained in strength following the Taif Agreement, as essential powers were transferred from the president of the republic to the council of ministers, which is led by a Sunni prime minister.

There is no broad-based expectation today that the Aoun-Nasrallah relationship will experience a total rupture, despite the considerable (if not numerous) observations made by both parties on the administration of the political orientations of the alliance over the past years. Behind the scenes, the FPM blames Hezbollah for giving priority to regional considerations in the drafting of its internal policies, while Hezbollah accuses its ally of being unruly and lacking political pragmatism in regard to internal events. This has embarrassed Hezbollah more than once with parliament Speaker Nabih Berri, its ally and fellow Shiite who is not keen on the continuation of the Shiite relationship with Aoun.

Yet when considering the issue in-depth, one might suspect that the reasons behind the signs of separation between the two parties go beyond this. There is, after all, a big difference in the nature of the cultural affiliation between the popular base of Aoun and that of Nasrallah. Accordingly, one could think that their alliance has been superficial, based on an emotional bond between their popular bases driven by a wariness of Sunni power rather than a genuine political understanding.

The fact is that there is a cultural distance that the Christian Aounists must cross to accept the lifestyle and way of thinking of the Shiite followers of Nasrallah and vice versa. Residents of Hezbollah’s strongholds — Beirut’s southern suburbs, south Lebanon and the Bekaa — have perspectives on the concept of the state and lifestyle that differ from those of FPM-dominated areas, in the Metn, Keserwan and other areas. Thus, one could argue that the rupture of the two parties' relationship would likely be based on strong social and cultural grounds and even political issues. Yet, there are links of mutual interest remaining in this alliance, not to mention a strategic dimension, that would make a decision by Aoun or Nasrallah to part ways difficult.

The first area of mutual interest is that Hezbollah needs Lebanese Christian cover to support its project of keeping its weapons under the banner of resistance, especially in light of the objections by Lebanese political forces of other religious groups to these weapons. At the same time, Aoun needs an alliance with a party as powerful as Hezbollah, as it ensures him a lion's share in the governance equation at levels of government and in administration.

Hezbollah can veto any governmental composition that does not meet Aoun’s wishes, which was often the case in recent times. Aoun cannot use a veto in such a situation, even if he enjoys a Christian parliamentary majority, since in Lebanon it is the religious communities that use vetoes and not the parliamentary majorities. In other words, Aoun, although he enjoys a parliamentary majority, he does not represent all of his confession, or religious community, since some Christian parties oppose him. Hezbollah’s position is stronger than that of the other Shiite player, its ally Amal, and if the former objects to a government's composition, it would be deemed a veto by a confession, not just by a big party.

In short, thanks to his alliance with Hezbollah, Aoun has a stronger position in terms of the ministerial balance of power, while Hezbollah, thanks to its alliance with Aoun, enjoys immunity within the national political equation. The changes to this equation agreed upon by the two parties during the last government, involve Aoun wanting to free himself from some of the burdens derived from his relationship with Hezbollah to an extent that would allow him to benefit from the support of other confessions in his goal of attaining the presidency of the republic. In other words, Aoun wants to maintain a relationship of conditional solidarity with Hezbollah, while opening up to his opponents. Aoun’s equation seems shaky, yet he has insisted on it, asserting that within the strategic framework (i.e., resistance) he will not severe his relationship with Hezbollah, but in terms of internal tactical matters, he disagrees with the party.

Given the current ambivalence in the relationship, Nasrallah has adopted a policy of self-restraint and patience toward Aoun. Hezbollah leaders are well aware that their alliance could be shelved at any moment because it is based more on emotional grounds than on ideological and political positions. Thus, the game of maintaining the first Shiite-Maronite alliance requires exhibiting patience to overcome its problems, if possible.