Turkey Stalls on Reconciliation With Israel

Israeli Prime Minister Benjamin Netanyahu has accepted the Turkish conditions for restoring relations between the two countries, but is Ankara willing to move forward? 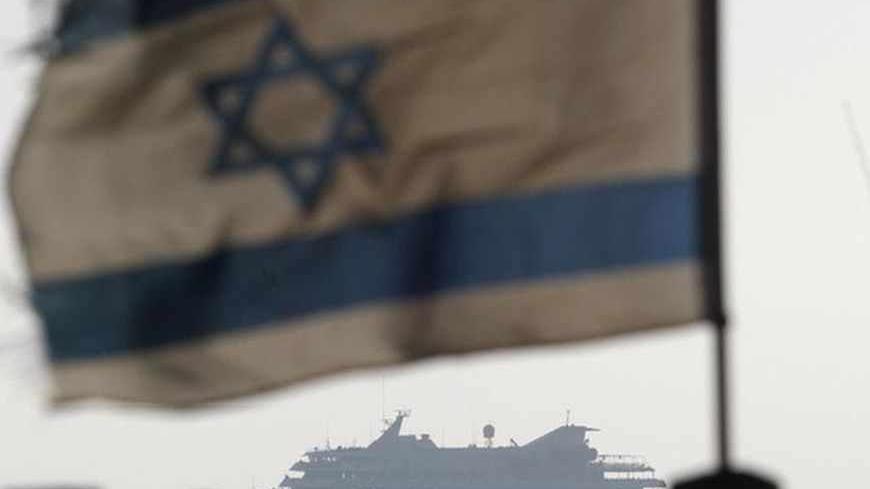 An Israeli flag flutters in the wind as a naval vessel (not seen) escorts the Mavi Marmara, a Gaza-bound ship that was raided by Israeli marines, to the Ashdod port May 31, 2010. - REUTERS/Amir Cohen

The process of reconciliation between Israel and Turkey — which started with a phone call between Prime Minister Benjamin Netanyahu and Prime Minister Recep Tayyiyp Erdogan on March 22, when Netanyahu offered to meet every demand made by Turkey after the Mavi Marmara affair — has come to a standstill.

Since that phone call, no progress has been made in the normalization process, although its outline had been predetermined and agreed upon in advance. By the end of it, Ankara was supposed to send an ambassador to Israel and accept the credentials of Israel’s ambassador to Turkey. This final fanfare, signifying the end of the process, now seems even more remote than ever.

In the months since the two sides began talking about the compensation that Israel would pay to the families of the Mavi Marmara victims, the media in both countries has focused on discrepencies between the sums that were expected to be paid. Various media outlets reported that the Turkish demands were ten times higher than what Israel had offered. Some gave numbers to support this claim. According to some outlets, Turkey had demanded $100 million, while Israel offered $10 million. Others claimed that Turkey had demanded $60 million, while Israel only offered $6 million.

When I told a senior Turkish official involved in the negotiations how surprised I was that these things were not concluded in advance, before the reconciliation discussion between Netanyahu and Erdogan, he dismissed the differences and emphasized, “An agreement has been reached on everything except for the figure.” According to him, there wasn’t even any need for a further round of talks. It would take just a few phone calls for the parties to reach agreement on the sum, and then they could continue down the path to normalization.

On July 23, the website of the Turkish newspaper Haberturk reported that there had been a “new development,” by which the differences between the parties had been reduced. Israel was now prepared to pay $15 million, while Turkey was demanding $50 million.

After this report appeared, Turkey’s Deputy Prime Minister Bulent Arinc, charged with overseeing the reconciliation process, summoned senior journalists in Ankara for a briefing about the latest developments in the process. Arinc wanted to downgrade the importance of the haggling going on between Turkey and Israel, because, he said, there can be no bargaining over the cost of blood. Instead, he emphasized that his government is insisting on "values."

This is in no way an argument about money, he contended, and went on to claim that Israel wants the sum it is to pay to be defined as going “beyond what would rightfully be expected of it,” while Turkey is sticking to its principles and demanding that Israel recognize that it is paying compensation for “its wrongful acts.” The Israelis are unwilling to stand by this, he said.

I rushed to check the precise formulation of the reconciliation outlines sent to me by Turkey’s Foreign Ministry immediately after the conversation in which Netanyahu apologized to Erdogan. This is what it said, in the official English text written by the Turks: “On behalf of the Turkish people, the prime minister accepted Prime Minister Netanyahu's apology. They have also agreed to conclude an agreement on compensation/non-liability.”

For three years, Israel has asked to send remittances to the families of those people who were killed and injured, but it did not agree to call this money "compensation." The grueling negotiations lasted three years, until Israel finally accepted every single Turkish condition, exactly as defined by Turkey. Turkish Foreign Minister Ahmet Davutoglu even said as much.

This leads to a single, unavoidable conclusion: After four months of talks, Turkey has changed the conditions that it originally set. The reason for this apparently lies with the families of the wounded and dead, who are vehemently opposed to the reconciliation process in general. When Davutoglu and Arinc brought the families together for a special briefing about the agreements being reached with Israel, they expected to be applauded for their effort. Instead, their work was shot down.

The Turkish government, when it agreed to the outline for reconciliation, believed that it would continue to have the full cooperation of the effected families. It later became clear that the families are more loyal to the IHH Humanitarian Relief Foundation, whose goal is to attack Israel over its long-standing siege of the Gaza Strip, than they are to Erdogan. In this particular instance, Erdogan acted out of character and refused to get into a confrontation with them. More precisely, he preferred to continue his confrontation with Israel rather than evoke the ire of a small but radical core group at home, which is at best motivated by vengeance and loss, and at worst by transparent political incentives.

But history remembers leaders who assume responsibility and make decisions, even if at a given moment those decisions seem unpopular. That is exactly what the Israeli prime minister did in this particular case, and in some other recent cases as well.

Netanyahu is at peace with his decision to accept Turkey’s conditions for normalizing relations between the two countries and with the outline agreed on in advance, even if he wasted three years before reaching this conclusion. Nevertheless, he is also becoming increasingly convinced that Erdogan’s Turkey is still trying to embarrass and extort Israel by avoiding completing the reconciliation and by refusing to show even the slightest hint of goodwill.

Netanyahu continues to stress that reconciliation between Turkey and Israel is a top strategic priority, and rightly so, but there is a limit to what he will pay for it.

Arad Nir Is the head of the foreign news desk and international commentator for Channel 2 News, the largest news provider in Israel. Arad has covered international politics and diplomacy, ethnic conflicts around the world and interviewed various world leaders, decision makers and opinion leaders. He teaches TV journalism at the IDC Herzliya and Netanya Academic College.