Israel's Ties With Greece No Substitute For Alliance With Turkey

Israeli Prime Minister Benjamin Netanyahu develops relations with Greece knowing that, though beneficial to Israel, they cannot replace the strategic alliance with Turkey. 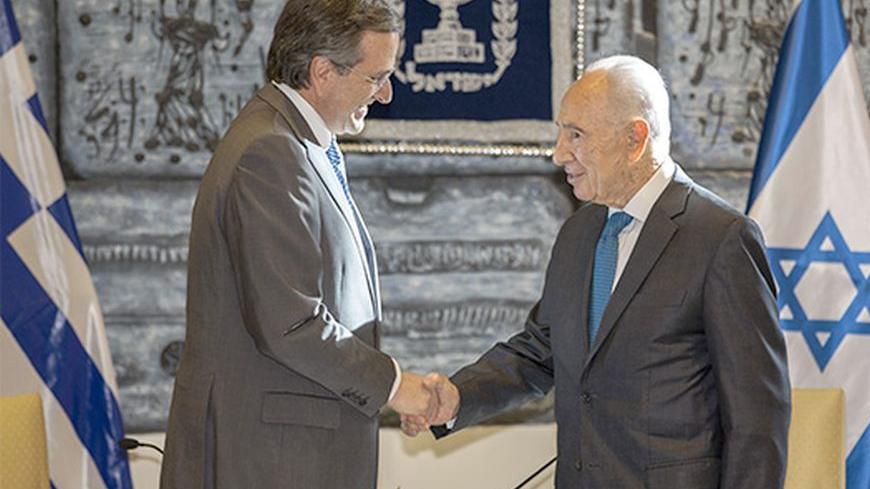 Years ago, I was a guest for a few months in the home of a Jewish family in Pennsylvania in the United States. The family members maintained a basic connection with Israel and Judaism, and occasionally would attend services at a Reform temple. It was in the kitchen of this family that I first encountered a product called kosher imitation bacon bits. My hosts explained to me that “it’s almost like the real thing,” and since they did not bring pork into the house, they would spice their omelets with those artificial crumbs with an industrial taste. As someone who grew up in a totally secular household in which we ate omelets with real bacon on Shabbat, I wondered about this use of a substitute for a product that one could do without.

I was reminded of the bacon-substitute story from my youth this week, when I followed the details of the first meeting between the Israeli and Greek governments that took place in Jerusalem on Oct. 8. Greek Prime Minister Antonis Samaras arrived from Athens with a respectable delegation of eight ministers to meet with Israeli Prime Minister Benjamin Netanyahu and a series of ministers in his government. It was officially announced that 10 agreements were signed at this meeting, agreements regarding cooperation in various spheres between the governments. The highlight was the announcement regarding strategic-security cooperation.

The Israeli and Greek air forces will carry out a joint exercise next week. But this will not be the first time that Israeli fighter planes will fly in the Peloponnese skies. In the last three years, Greece has given Israel a strategic hinterland in the air and the sea — territory for training drills and army maneuvers that are so lacking here. In September, the chief of staff of the Greek army, Gen. Michalis Kostarakos, visited Israel for the first time. He walked down the corridors of the Israel Defense Forces (IDF) headquarters and was introduced to Israeli officers — the same officers who maintained close professional and personal relationships with Turkish counterparts. Some of those Turkish officers lost again this week, on Oct. 9, in Ankara’s court of appeals, which confirmed the draconian punishments imposed on them in the “Ergenekon case.”

No one in the Israeli corridors of power denies the fact that the ties between Israel and Greece tightened greatly after Israel’s strategic alliance with Turkey began to fall apart. The height of the process was, of course, the 2010 Marmara flotilla affair in which Turkish activists were killed. Sometimes it even appears that Israel brandishes its tightening alliance with Greece — "the historical adversary" — as a way to defy Turkey. Another example is the energy project to transport Israeli gas via the Republic of Cyprus (here it is called “Greek Cyprus,” and in Turkey it is called “Southern Cyprus”) and from there to Greece. This initiative is 10 times more expensive than simply transporting gas via Turkey, but is another "stick" used by Israel in the face of Ankara’s ongoing hostility. A source involved in the affair told me this week that as of now, “the economic consideration will not be the deciding factor. We have to distinguish between the ideal and the reality.”

The reality is that the reconciliation process with Turkey is stuck. Turkish Prime Minister Recep Tayyip Erdogan is not interested in forcing the IHH Humanitarian Relief Foundation people and the families of the Marmara casualties to withdraw their legal claims against IDF soldiers, what caused them to bring excessive demands for compensation. Today, sources in Jerusalem admit, “We erred in that we did not come to an agreement regarding the sum before the apology talk.” Netanyahu did the right thing to exploit his warm personal connection with the Greek prime minister at that time, George Papandreou, to tighten ties with the country that, until then, had been very aloof and critical toward Israel.

Aryeh Mekel, Israel’s ambassador to Greece who supervised the rapprochement between the two countries, emphasized in a talk with Al-Monitor: “Greek-Israel relations today are at an unprecedented peak. In the last three years, the relationship has undergone a dramatic changeover due to the decision of the two countries to open a new page ... and maintain long-term strategic cooperation without connection to relations with other countries.”

But Greece is not Turkey. Greece is still in the throes of a deep economic crisis; it hopes to recover from the crisis only next year. Its political system also stabilized only recently. While Greece does not share long borders with Syria, Iraq and Iran, it does share a border with Turkey. Thus, despite the new alliance, Israel cannot afford to forgo ties with Turkey.

Just as the Israeli government was careful to conduct its ties with Egypt’s Muslim Brotherhood government with caution and finesse, so it should continue to search for a way to rehabilitate its ties with the Turkish government. This is a top priority, an utmost strategic interest, and should be carried out simultaneously with the emerging relationship with Greece.

Athens also understands the importance of Turkey. Prime Minister Antonis Samaras met with Erdogan before he met with Netanyahu, and if we go into detail, we see that 25 agreements were signed in Ankara for cooperation between countries that had been once sworn enemies, in contrast with 10 agreements with Israel.

Arad Nir is the head of the foreign news desk and international commentator for Channel 2 News, the largest news provider in Israel. He teaches TV journalism at the IDC Herzliya and Netanya Academic College.