Three weeks after his official visit to Turkey, Defense Minister Benny Gantz visits Greece in an effort to reassure his counterparts that rapprochement with Ankara won’t come at the expense of the trilateral Hellenic partnership. 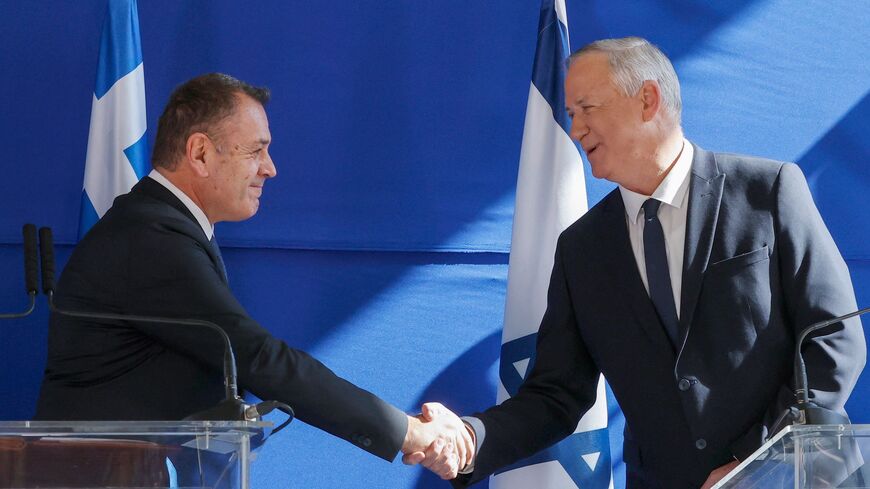 “Iranian aggression continues to be a great threat to the region and the world,” Gantz said at a joint news conference with his host. “We see Iran's involvement in the war in Ukraine; the UN Board of Governors voted tonight again affirming that it (Iran) continues to develop its nuclear program. We see its support for terrorism and its proxies in Syria, Lebanon, Gaza and also in the West Bank, and just this week an Iranian drone hit a civilian ship. This is another sign of the need to stop the spread of Iranian influence in the region and the world — and its influence on its affiliates. This is what we are doing through CENTCOM's umbrella in the region."

Israel has formed a strong partnership with Greece and Cyprus over the past decade, especially on the backdrop of the deterioration of its ties with Turkey. Wide-ranging security relations include joint military exercises, intelligence cooperation and more.

The outgoing minister has been spending his final days in office trying to stabilize Israel’s regional ties in order to give his successor time to get up to speed on the issues involved.

Gantz’s brief visit to Greece should also be viewed in the context of the Israeli rapprochement with Turkey over the past year, which has prompted concerns in Athens over its impact on the alliance with Israel. Senior Israeli officials have made a point of reassuring the Greeks that the restored relations with Ankara would be measured and limited in scope and would not come at the expense of the Hellenic alliance with Greece and Cyprus.

Gantz and the officials who traveled with him to Turkey last month conveyed a similar message to their hosts there, offering Israel’s help in easing the prolonged dispute between Greece and Turkey. In Athens today, Gantz told his Greek counterpart that Israel “should try to take advantage of its ties and relationships in order to form bridges for peace and stability in the eastern Mediterranean.”

Standing beside Panagiotopoulos at a visit to the Tomb of the Unknown Soldier, Gantz made a point of highlighting the importance Israel attributes to ties with Athens. “Israel regards Greece as a strategic partner, and together with Cyprus we will continue to enhance our trilateral alliance in the eastern Mediterranean.”

Panagiotopoulos, for his part, said Greece is “determined to maintain this ever-increasing momentum and also to enrich our defense industrial cooperation.”

Summing up, Gantz said, “We must act together in the face of threats and also take advantage of the opportunities before us. This is how we build and expand the regional architecture against terrorism in the Middle East; this is how we worked to achieve an important agreement on the maritime border with Lebanon; and this is how we can try and take advantage of Israel's connections and relations with the countries of the region, as a bridge for stability and peace also with our partners in the eastern Mediterranean."