AKP May Have Gotten Message From Gezi Park

The Justice and Development Party (AKP) may be coming around to the notion that participatory, not majoritarian, democracy is the answer for Turkey. 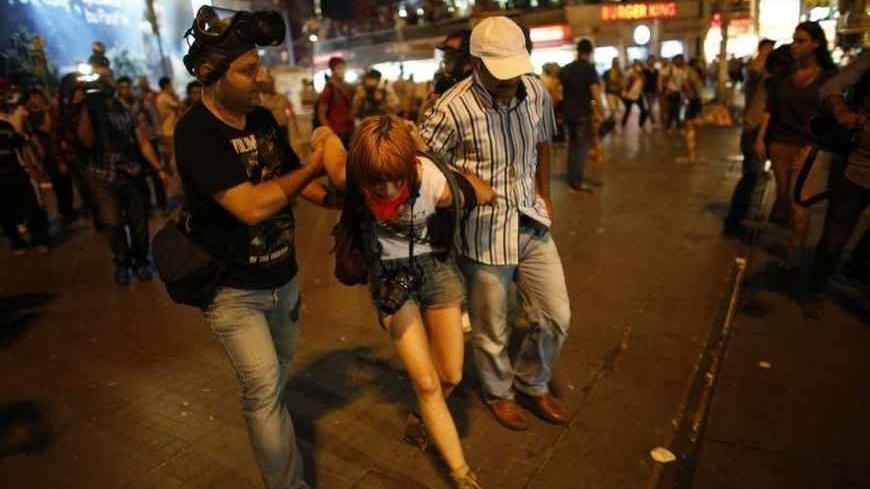 A protester is detained by plainclothes police officers during an anti-government protest at Taksim Square in Istanbul, June 29, 2013. Thousands of protesters marched to Istanbul's Taksim Square on Saturday chanting slogans against the government and police after security forces killed a Kurdish demonstrator in southeastern Turkey. The protest had been planned as part of larger unrelated anti-government demonstrations that have swept through the country since the end of May, but became a voice of solidarity with the Kurds after Friday's killing. - REUTERS/Umit Bektas

It has now been a month from the beginning of the Gezi Park crisis and the subsequent anti-government protests that shook Turkey. Most observers, including myself, have concluded that the Justice and Development Party (AKP) government led by Prime Minister Recep Tayyip Erdogan have both misunderstood and mismanaged the crisis. However, I also think that the AKP elites have learned some lessons and are willing to take some helpful steps.

For sure, the misunderstanding still goes on, and at its heart lies the AKP propaganda, if not self-delusion, that all the protests were orchestrated by "dark powers" which wanted to sabotage Turkey's glorious progress. A film prepared by the AKP public-relations department lays out this scheme very clearly, by explaining how Erdogan's success provoked a long list of conspirators, ranging from the interest-rate lobby to foreign companies and their domestic "spies." Uncritically pro-Erdogan commentators in the media take these conspiracy theories to new heights every day, blaming almost every political actor in the world except the AKP itself. According to one popular theory, for example, one of the conspirators was the German Lufthansa, which wanted to take on revenge Turkey for the success of Turkish Airlines and the construction of Istanbul's third airport, which promises to be Europe's largest.

There are also worrying signs of a probable witchhunt against the protesters. In fact, we should grant that some  of them — especially those who come from the far left — were inexcusably violent as they tried to storm the prime minister’s office or set AKP buildings on fire. In other words, the police is justified in investigating such criminals. But other steps by the authorities, such as the government’s demand from public offices the lists of public servants who joined the protests, are concerning. Similarly worrying are Erdogan's public threats against businessmen who supported the protests. The government has to understand that while vandalism is a crime, peaceful protests are perfectly legitimate and no one can be tried for joining them.

In looking at all this, one can easily become pessimistic for Turkey. However, there are also signs that beyond all this paranoia, the AKP is also analyzing the real causes of the protests and trying to find solutions for them.

I personally witnessed this effort last week at a meeting organized by the AKP's Istanbul branch and headed by one of party's rising stars, Suleyman Soylu. It was a "workshop" in which party officials invited about a dozen friendly critics and listened to their suggestions, to turn them into a report and present it to the prime minister. Several speakers, including myself, advised the government to stop acting like "Old Turkey" by indulging in conspiracy theories and focus on diffusing the tension in society.

This approach seems to have resonance in the AKP as well, as some agree that even if there are evil conspiracies against their government, they must not give the conspirators any leverage.

The recent rules issued by the Interior Ministry about police conduct seem to a step toward such self-correction. Accordingly, the police were given orders to act with more restraint with regard to the usage of tear gas against agitated protesters. First, repeated warnings will be made to the group, and no gas is to be used in closed spaces. Critics have said that even these rules fall below EU standards — and they are right — but this is still a step forward.

An even more significant piece of news is the resurrection of the “Alevi opening.” This was a much-hailed liberal effort by the AKP government in 2009 to solve the troubles of Alevis, Turkey’s most significant non-Sunni minority, but it was frozen for the past two years due to lack of consensus between the authorities and the Alevi groups. But last Tuesday, June 25, AKP MP Hasan Fehmi Kinay announced that the "opening" will move on, officially recognizing Alevi places of worship and giving Alevi clerics the same state support as Sunnis. He added that Turkey's Alevis would not feel so much like “the others” anymore.

This step was undoubtedly relevant to the Gezi Park protests, for it is no secret that the Alevi youth have been one of the major, and perhaps one of the most agitated, groups on the streets. It shows that the AKP hopes to reach out to the Alevis rather than further antagonizing them.

There are also some positive signs I personally got from a few figures that are close to the prime minister. One of them told me that “The presidential system project is over,” which means that one of the major concerns about Erdogan — that he is heading to a "one-man-system" — will not become a reality. The same source noted that Erdogan, next year, will most probably be elected president with the post's current powers, which are more symbolic than executive. The same source added that it is also probable that current President Abdullah Gul, who has gained widespread respect for his moderate and nuanced tone, might return to the AKP to be its next leader and, in 2015, take office as the new prime minister of Turkey. That would certainly have a soothing effect on the anti-AKP segments of Turkish society and thus pave the way for a national consensus.

In short, despite its self-righteous propaganda that suggests otherwise, the AKP might have gotten the message of the Gezi Park protests, as several party members already noted: The majoritarian democracy that the AKP has promoted, especially in the past few years, is a recipe for crisis. And the only way out is a more participatory more liberal democracy.