According to a recent poll, only 27.4% of Turks support their prime minister's Syria policies. 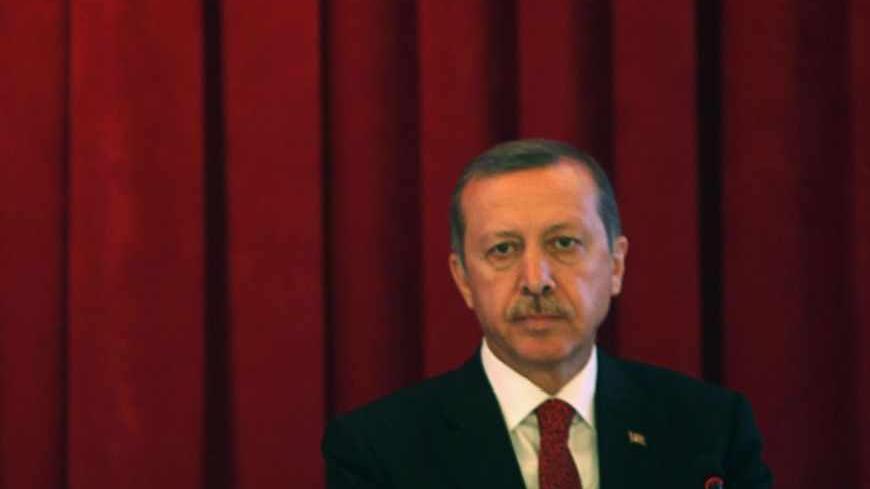 Turkish Prime Minister Recep Tayyip Erdogan is pictured after his speech during a conference in Ankara, June 18, 2013. - REUTERS/Dado Ruvic

Recent developments have driven Ankara’s Syria policy farther down a dead end, leaving a frustrated Erdogan government to invest more hope than the situation merits in the decision by the United States to send light arms to the Syrian opposition in the expectation that this will somehow tip the balance against President Bashar al-Assad.

One of these developments is the defeat of the opposition in the strategic city of Qusair by Assad forces with overt backing from the Lebanese Hezbollah and covert support from Iran. For Prime Minister Recep Tayyip Erdogan and Foreign Minister Ahmet Davutoglu, this has raised the specter of Assad winning the war and remaining in power.

Apart from delivering a blow to their desire to see a Sunni-dominated government in Syria, a victory by Assad would also pose a security threat for Ankara reminiscent of the days when Damascus backed the separatist Kurdistan Workers Party (PKK) in its terrorist campaign against Turkey of nearly three decades, starting in the mid-1980s.

Another unexpected development for Ankara was the mass demonstrations across Turkey against the Erdogan government, of course, and the manner in which they were repressed violently by the police. These events have made a shambles of Erdogan’s arguments against Assad based on respect for democracy and human rights, a fact about which Syrian officials are no doubt gloating.

The demonstrations have also turned Davutoglu’s attention away from trying to generate international support against Assad, forcing him instead to concentrate his diplomatic energies on responding to the harsh criticism from the United States and Europe over his government’s mishandling of these events.

An often repeated argument in defense of Davutoglu and his highly unpopular Syrian policy has been that he spent six hours in August 2011 in Damascus trying to convince Assad to be reasonable toward peaceful demonstrators who were merely using their democratic rights to put forward legitimate demands. This argument has little legitimacy after the violence perpetrated by the Erdogan government against Turkish demonstrators.

Another blow to Davutoglu’s Syria policy came this week from the MetroPoll Strategic and Social Research Center. The English-language daily Today’s Zaman reported on June 16 that the latest MetroPoll survey indicated that 54.2% of respondents opposed the government’s Syria policy, while only 27.4% supported it. In addition, 49.9% were against Assad's staying in power, but 43.9% said they did not care about this one way or another.

Meanwhile, 45.7% blamed the government for its negligence over the deadly double-car bombing in Reyhanli in May, in which 53 people died and which the government says was perpetrated by pro-Assad elements in Turkey. Given these figures and the latest events in Turkey, the Erdogan government’s ability to push aggressively against the Assad regime has been seriously curtailed.

Many analysts agree that public dissatisfaction with Ankara’s Syria policy, especially after the Reyhanli bombings, fed the sentiments leading to the nationwide demonstrations. All of this leaves Erdogan and Davutoglu with little choice but to hope that others will intervene in Syria and tip the balance against Assad, who seems to have gained the upper hand as of late.

The Obama administration’s announcement that Assad had crossed its red line by using chemical weapons along with its decision to send light arms to the Syrian opposition were, therefore, welcomed by Ankara. Ministry of Foreign Affairs spokesman Levent Gumrukcu told reporters on June 14 that Washington’s findings had “confirmed that the allegations of the use of chemical weapons by the regime had been verified without any grain of doubt.” He underlined, “This conclusion overlaps with the findings possessed by the Turkish authorities.”

The English-language Hurriyet Daily News, for its part, reported on June 14 that Turkish officials were voicing approval of the US decision, “arguing that such a move might eventually tip the balance between the regime and the rebels on the battleground.” The paper also, however, quoted the same officials as saying that “Turkey had no heart for a similar move, since it had long been doing its part in regard to Syrians.”

The Erdogan government is shying away from openly arming the Syrian opposition because of the potential domestic ramifications at a time when its policy on Syria remains unpopular with most Turks. Another concern is that the sectarian violence in Syria might spill over to Turkey more visibly if Ankara were seen to be supplying arms to the opposition. The Sunni-Alevi divide in Turkey is very real, and sensitivities on this score have already been manifest in relation to the situation in Syria.

The problem with the US decision to supply light arms to the Syrian opposition, however, is that it is unlikely to change the situation on the ground. Assad’s forces are armed with heavy weaponry, defended by sophisticated Russian radar systems and have a constant supply of ordinance and spare parts from Russia and Iran. Meanwhile, Moscow and Iran have also indicated, in so many words, that they will not stand by as the West arms the Syrian opposition.

The United States, as well as Britain and France — which have been keen to arm the secular opposition — also remain concerned that any sophisticated weaponry sent to Syria might fall into the hands of jihadists there and be turned against the West in the future. Much to Ankara’s annoyance, its initial support for radical Islamist groups like Jabhat al-Nusra has thus, in effect, turned into a handicap for the Erdogan government, because the fear that sophisticated weapons might go to the jihadists is limiting Western support to the opposition. If Davutoglu had not been so keen in his support of these groups, and instead had concentrated on the secular and democratic elements in the opposition, he might have made more headway in convincing the West to help the opposition in a meaningful manner.

A further complication for Ankara is that Hezbollah has entered the Syrian war with assistance from Iran and Iraq’s large Shiite community. Many observers in Washington indicate that it is this, and concern for Israel’s safety, rather than any red line having been crossed over the use of chemical weapons by Assad, that lies behind the US decision to send light arms to the opposition.

Neither the United States, nor Europe, or Turkey for that matter, seems prepared to put boots on the ground to counter the assistance Assad is getting from Hezbollah, Iran and Iraq. There is also a reluctance to establish a no-fly zone against the Syrian air force since this would automatically entail military involvement, even if Washington says, somewhat unconvincingly, that this option remains on the table.

President Obama has, after all, to consider the opposition by the American public to getting involved militarily in Syria. NBC reported on June 17 that a “whopping 70% of Americans” said in a Pew Research Center poll that they opposed the United States and its allies sending arms to anti-government forces in Syria.

Given this overall picture, at this stage there appears little Ankara can do against Assad except to issue hollow warnings that it has no means of carrying out. Meanwhile Russian President Vladimir Putin made it abundantly clear during the G-8 Summit in Loch Erne, Northern Ireland, that Moscow has no intention of dropping Assad or allowing others to topple him. Put another way, Erdogan and Davutoglu remain in the corner they painted themselves into with their one-track policy on Syria, while the forces of their nemesis, Assad, are seen to be advancing.