Israel's Deputy Defense Minister Danny Danon lets the cat out of the bag. 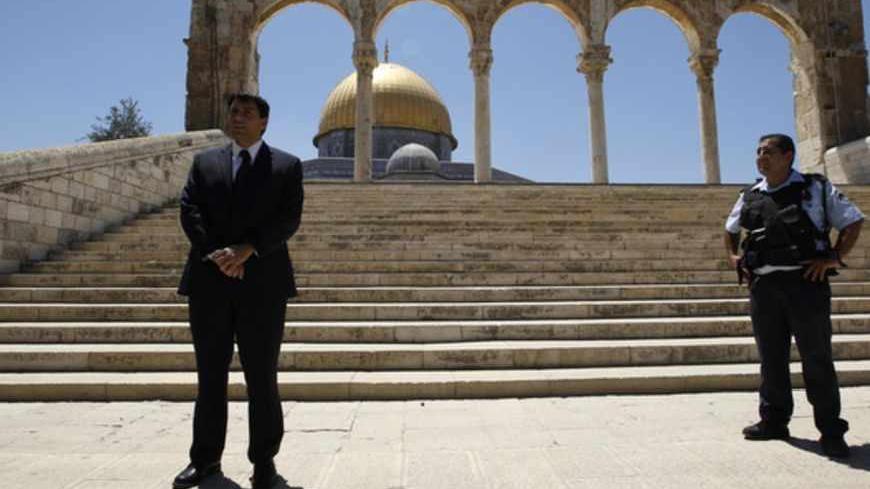 Israeli lawmaker Danny Danon (L), then a deputy parliament speaker, stands near an Israeli police officer in front of the Dome of the Rock on the compound known to Muslims as al-Haram al-Sharif and to Jews as Temple Mount, in Jerusalem's Old City, July 20, 2010. - REUTERS/Ammar Awad

“The Emperor has no clothes!” the little boy shouted in the classic Danish fairytale by Hans Christian Andersen. Lucky for us, we have a little boy just like that to shout the news from the rooftops and to expose a reality that we all tend to deny. We have a little boy to point out all the lies and false promises made by kings, presidents and prime ministers. That boy’s name is Deputy Defense Minister Danny Danon.

True, Danon isn’t really a little boy anymore. He is actually the deputy minister of defense. Nevertheless, this week he said something that most of us don’t like to hear: Prime Minister Benjamin Netanyahu, the leader of his party, keeps calling for talks with the Palestinians because he knows that Israel will never reach an agreement with them.

In an interview with the Times of Israel on June 8, the deputy minister of defense told the truth that we all deny. He said that the ruling coalition is “staunchly opposed to a two-state solution and would block the creation of a Palestinian state if such a proposal ever came to a vote.”

Jaws must have dropped in the prime minister’s office. How is it possible that this boy, Danon, who even received a special treat in being appointed deputy minister of defense, is shouting the truth from the rooftops? Danon wasn’t embarrassed about it, either. He certainly didn’t mince his words:

The cat is out of the bag.

On the other hand, it isn’t really that surprising. Everyone could see it. Netanyahu and his government say one thing, but in practice they do everything they can to avoid implementing the one idea that can ensure peace with the Palestinians. What I mean, of course, is a two-state solution, an end to the conflict and Israeli recognition of a Palestinian state in exchange for Palestinian recognition of Israel as a Jewish state.

The fact is that the tactic of saying one thing while doing the opposite was not the brainchild of Netanyahu and his government. Several other prime ministers did the same thing before him. The most sophisticated of them all was former Prime Minister Ariel Sharon. This is what he did exactly 11 years ago on June 24, 2002, when then-US president George W. Bush presented him with his "Roadmap to Peace." The plan called for an immediate cease-fire as a first stage. The second stage, to be completed by late 2003, called for a freeze on settlement construction and the creation of a Palestinian state with temporary borders. The third stage, to be completed by the end of 2005, was a final status agreement with international associates and supervisors.

So why was Sharon the most sophisticated of the lot? Because the first thing he did was to say "yes." After consulting with his closest advisers, he immediately announced that he accepted the plan, even praising it. However, he also asked for 11 specific reservations to the Statement of Principles — just for protocol, of course.

Anyone who knew Sharon and his opinions was well aware that he would never be willing to accept Bush’s Roadmap. He would never agree to accept the establishment of a Palestinian state headed by the one man he detested more than anyone, then-Palestinian chairman Yasser Arafat.

We should remember that Arafat was then the head of the Palestinian Authority, and 2002 was a tough year for the intifada. Back then, Sharon used to take every visiting congressman and every European diplomat to the summit of Jabal Harasa in Samaria to show them Israel’s “narrow waistline” and the looming dangers if — God forbid — the territory is handed over to Arafat. On a clear day, they could see the ships docked in the port of Ashdod, the entire city of Tel Aviv and airplanes taking off and landing at Ben Gurion Airport. On the other hand, offering real resistance to such an important component of Bush’s foreign policy would be imprudent and lead to significant pressure on Israel. He knew that he could never say no to the US president, who was Israel’s closest friend on Capitol Hill at that time.

That is why Sharon decided to say "yes" but at the same time pulled a rabbit out of his hat that would kill Bush’s vision softly: unilateral disengagement from the Gaza Strip. In other words, his idea was to sacrifice Gaza, dismantle the Jewish settlements there and evacuate the settlers in order to save the West Bank.

In hindsight, it is safe to say that his plan succeeded. The disengagement is remembered negatively due to the firing of Qassam rockets and mortars at the settlements of southern Israel and an incessant series of clashes between Israel and the Gaza Strip. At the same time, Jewish settlements in the West Bank expanded and multiplied, and the Roadmap became obsolete.

Four years after the disengagement, in June 2009, Netanyahu gave a speech at Bar Ilan University that stunned everyone who knew him.

“I told President [Barack] Obama in Washington: If we agree on the essence, the terminology will not pose a problem. I am stating the essence here clearly: If we get a guarantee of demilitarization, and if the Palestinians recognize Israel as the Jewish state, we are ready to agree to a real peace agreement, a demilitarized Palestinian state side by side with the Jewish state.”

Another four years of stalemate have passed, and we needed Netanyahu’s protégé Danon to reveal the big secret, even if he did so without the prior approval of the head of his party. Netanyahu is only saying "yes" so as not to upset Obama, just like Sharon tried not to upset Bush. Nevertheless, there is a big difference between the two of them. Sharon actually evacuated settlements, while Netanyahu only expands them.

So it is worth paying attention to Danny Danon, who naively told the truth, even if he’s not a little boy.