Netanyahu as the Prophet Jeremiah

Israeli Prime Minister Netanyahu radiates pessimism concerning Israel's strategic landscape, when he is concerned about his own standing within his party and his coalition. 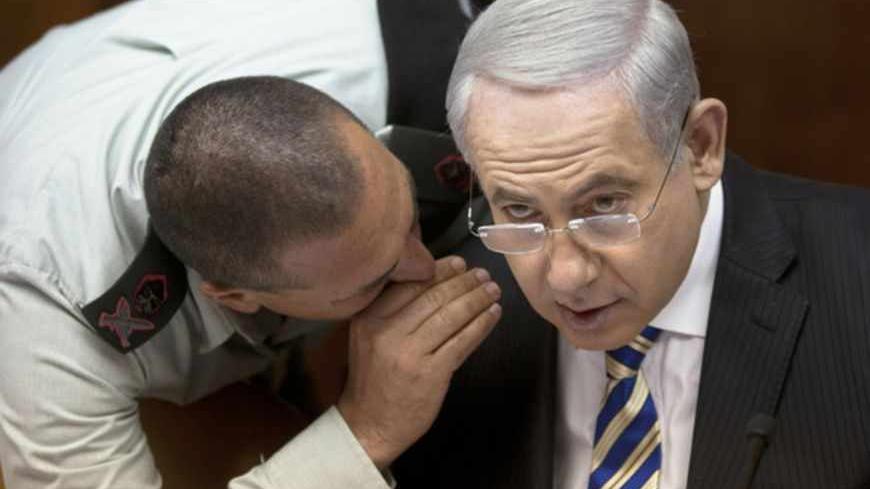 Israeli Prime Minister Benjamin Netanyahu is depressed. Ashen faced and weary-eyed, his body language is all gloom and doom. Usually for him, that is accompanied by a common cold, a pile of used tissue papers and an empty cold medicine box. This works well for him with his doomsday prophecies about Israel’s dire situation, the mounting threats, the black clouds collecting in the offing, the hopelessness and the infinite plots being devised against the lone Israel. For the first time since the general elections in January 2013, Netanyahu addressed the Knesset Foreign Affairs and Defense Committee this week [June 10]. Some of the attendants said that his review was the “most pessimistic, alarming and hopeless” one they have ever heard from him since he went into politics. “I closed my eyes for a moment,” one of the committee’s veteran members related, “and I was sure it wasn’t [Prime Minister Benjamin Netanyahu] Bibi who was talking to us, but none other than the Prophet Jeremiah, warning the people of an impending calamity.”

Are things really that desperate? Of course not. Should Israel’s many enemies prepare to crack open the champagne bottles? Certainly not. Quite the contrary. So why is Netanyahu so pessimistic? That’s simple: It’s not Israel’s situation that brings Netanyahu down; it’s his own. For leaders such as Netanyahu, national and personal interests get mixed. When they feel bad, they’re convinced that the state feels bad, too. After all, Netanyahu thinks he is the state. The premier’s existential depression is justified since it reflects his own persona. His review at the Foreign Affairs and Defense Committee could be instantly reversed. At the committee meeting, Netanyahu talked about the tens of thousands of rockets and missiles threatening Israel’s center from all around (Syria, Hezbollah, Iran, Hamas), as well as the S-300 batteries that can shoot down any passenger airliner taking off from Ben Gurion International Airport. He went on to talk about Iran’s nuclear arms race, the grave situation in Egypt, the tenuous grip of the regime in Jordan, the splintering of Syria and the danger of massive transfers of weapons of mass destruction into terrorist hands. Incidentally, the chairman of the Foreign Affairs and Defense Committee, [former foreign minister and] Knesset member Avigdor Liberman, set next to Bibi, providing him with many low-hanging fruits. Liberman was the only person in that room who was more pessimistic than Netanyahu. Maybe in Liberman’s case that’s a personal issue, too. After all, his political fate rests in the hands of three judges. Evet [Liberman] hates it when his destiny is entrusted in someone else’s hands.

Born and raised on pessimism, Netanyahu spoke to the Foreign Affairs and Defense Committee only about the one-third empty glass. If he had been anything like Israel’s President Shimon Peres, he would have talked about the fact that for the first time since its foundation, Israel doesn’t face an existential threat — assuming that Iran’s nuclear program will be stopped at some point. He could have celebrated the fact that the large Arab militaries, which for years laid siege on our narrow borders, dissipated and vanished from the map. The Syrian threat no longer exists. Egypt cannot wage any war for the next 20 years. Jordan is an ally and Lebanon is internally torn asunder. Israel has never been in this situation, whereby the massive IDF (Israel Defense Forces) — with its armored divisions, its hundreds of fighter jets and elite infantry brigades — stands jobless in face of a depleted region. What is gathering momentum, however, is the threat of terrorism. But even if you search high and low, you won’t find anywhere in the world a country that knows terrorism and how to cope with it better than Israel.

Will there be al-Qaeda bands in the Golan Heights? So be it. This is not what will destroy the Zionist home. The same goes for Lebanon. All in all, the disintegration of the Arab world and the fire raging throughout many of its capitals improve — considerably and perhaps even dramatically — Israel’s strategic position. Truth be told, at any given point in time Israel can come under a surprise missile attack, but such attacks have yet to destroy countries. Anyone who dares take such action will have to take into account that the punishment will be immediate and heavy, possibly intolerable. In short, Israel’s former prime ministers David Ben-Gurion, Levy Eshkol, Golda Meir and Menahem Begin would have gladly swapped their woes for Netanyahu’s if only they could.

From Netanyahu’s standpoint, all of the above should have been good news. Given his outlook on life, he couldn’t have asked for anything more. Had Israel been surrounded by peace partners that put far-reaching peace proposals on the table, Netanyahu would have sunken to an even greater depression than the one he is in today. The worst thing Netanyahu can entertain in his mind is an “outbreak of peace.” So for him, the current situation, where nothing is expected of him, except that pestering Palestinian issue, is a dream come true. So why does he feel down in the dumps?

Netanyahu is down because he has discovered that he has no party. The mutiny within the ranks of his Likud party is deep-seated and terminal. The prime minister really has no party behind him. What he has is a hodgepodge of politicians, some of whom despise him and some of whom wish to succeed him. He has lost his rein on what used to be the party in power. He is unable to replace the party’s director-general; he cannot start or end a party caucus meeting. He is at sea. Furthermore, he can smell blood in the water, knowing it’s his own. Until not that long ago, despite the rancor some of the members harbored against him, everyone knew that without Bibi they could not rise to power. Now, he’s turned from an asset into a liability. He sits there waiting for the first person to start throwing stones at him. If he had the fortitude that former Prime Minister Ariel Sharon had, he would have done something. He would have dismantled the Likud party or severed his ties with it. But Netanyahu isn’t cut out for such moves. Netanyahu cowers in the corner, bewailing his miserable fate. That’s exactly what it looks like.

The prime minister is despondent because he realizes that his approval rating is at an all-time low. The constant reports about his hoggish hedonism have broken through the glass ceiling, gathering the critical mass that has resulted in the fact that both he and Mrs. Netanyahu are loathed even by their own electoral base. He’s depressed because he can sense the end coming, and he knows that if this were to happen, he would be better off dead than alive. He’s depressed because he is wedged in a coalition he hates, while yearning for a coalition he could love, which sits right there in front of him at the Knesset plenary. It’s almost within reach, but for the time being not quite. He wants the ultra-Orthodox; he wants the Labor party. Instead, what he has is Finance Minister Yair Lapid and Minister of Economy and Trade Naftali Bennett. They both seek to succeed him as quickly as possible. And there is Justice Minister Tzipi Livni, who until not very long ago was the most reviled person on Balfur Street — the address of the prime minister’s residence in Jerusalem.

Netanyahu has lost his joie de vivre. This is partly because he has realized that he will not be able to stop the Iranians as he had pledged — if anyone is going to do it, it’s President Barack Obama — and partly because he realizes that he doesn’t have much to offer the Palestinians either. Yes, Netanyahu wants to make history. He talks about making history. Yet, all he can do is to create hysteria. Palestinian Chairman Abu Mazen [Mahmoud Abbas] had two conditions and one request for resuming the diplomatic negotiations. The conditions were a statement to the effect that the negotiations would take place on the basis of the 1967 lines and that there would be a construction freeze in the territories. The request was that those Palestinians imprisoned before the Oslo agreement would be released. In the past few weeks, Abu Mazen made a dramatic gesture by waiving these two conditions. Let there be only one condition, he suggested — either the 1967 lines or a construction freeze. Netanyahu was unable to give him even that. He knows that US Secretary of State John Kerry is on the verge of despair. He also realizes that if Kerry does despair, the Americans will leave him here to his own devices. He is afraid that, at that point, Tzipi Livni will have to walk out of the coalition and that the Labor party won’t be able to step in. So, either he will have to call for re-elections or somehow persuade Yair Lapid to form a coalition with the ultra-Orthodox. Bibi hears the clock ticking, knowing full well that it’s his own clock counting down the minutes. That’s why he is down. And still, let’s not forget: This is the Middle East. At any given time, a party can turn into a funeral and grief into a feast. So let’s pray for a miracle.