After three years of discussion, the various blocs in the Kurdistan Regional Government have reached a consensus on military, security, political and personal exceptions to the law protecting free access to information. 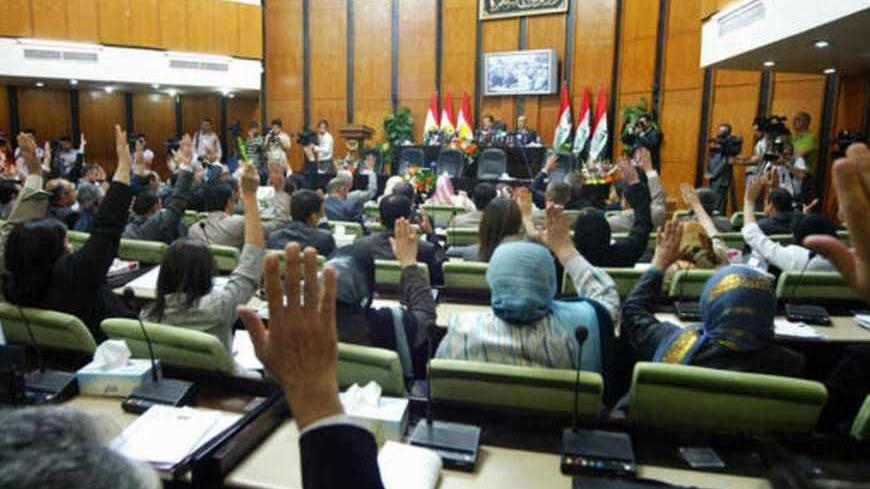 A show of hands takes place during the first session of the Kurdistan Regional Parliament in the northern Kurdish capital of Erbil, 350 km from Baghdad, on Sept. 8, 2009. - SAFIN HAMED/AFP/Getty Images

After three years of negotiations on the law regarding the right to information in the Kurdistan Region of Iraq, the ruling bloc, comprised of the Kurdistan Democratic Party (KDP) and the Patriotic Union of Kurdistan (PUK), and the opposition, the Movement for Change, Jamaa Islamiya and the Kurdistan Islamic Union, reached a consensus on a formula to grant exceptions to this controversial law.

In a regular session held Monday [June 3], the Kurdistan Region of Iraq parliament approved a number of military, security, political and personal exceptions in Article 15 of the mentioned law.

The article stipulates, "Any public or private institution shall not refrain from providing information under the pretext of preserving the institution’s interests, if the public interest requires the disclosure of such information.”

The article also stipulates that everyone has the right to withhold educational, medical or employment records as well as bank account information and personal employment details, unless they have the consent of the concerned person. They can also withhold information on citizens’ safety and health or information that would threaten citizens’ lives and information that, if disclosed to the media, would be leaked to websites which, even if protected, could be hacked.

This is the first time that the ruling and opposition blocs in parliament of the Kurdistan Region of Iraq have reached a consensual formula on this law. It is considered a disputed and controversial issue in the media, as it will help promote transparency in government institutions and eliminate administrative and financial corruption by providing journalists, media, researchers and civil society organizations with information.

Speaking to Al-Monitor, Adnan Osman, a member of the opposition Movement for Change, said, “There was an intention to reduce and merge these exceptions without explaining them. The main point is that there are exceptions in all universal laws, because some of them are related to the people's rights and individual rights, and others are related to human rights, institutions of a confidential nature or intellectual property rights.”

He confirmed, “The final version was adequate, and complied to a certain extent with international standards. There was also a consensus on many articles and clauses.”

Yet, he did not hide his fears that the law would be exploited, and some would use these exceptions to hide information from citizens and the media. He continued, “The issues regarding contracts, the purchase of weapons and public money must be under surveillance. Moreover, the people, individuals and organizations have the right to obtain information on the financial and legal aspects of these institutions.”

The three Iraqi Kurdish opposition forces had won 35 out of 111 seats in the 2009 parliamentary elections in Kurdistan. The seats were distributed as follows: the Movement for Change won 25 seats, the Islamic Group won four seats and the Kurdistan Islamic Union won six. The Kurdish bloc — which includes the ruling KDP, led by Kurdistan Region of Iraq President Massoud Barzani, and the PUK, led by Iraqi President Jalal Talabani — won 59 seats.

Moreover, Tariq Jawhar, the media adviser for the speaker of the Kurdistan Region Parliament, told Al-Monitor that they included these exceptions in the law based on the democratic countries’ models. He added that the specific situation in the Kurdistan Region of Iraq and deliberations between all blocs in more than one parliamentary session were taken into consideration to reach an agreement on these exceptions.

Jawhar noted, “The draft law on the right to information in Iraqi Kurdistan goes back to the second parliamentary session, which ended in 2008. A number of MPs adopted the draft law in the third session.” He added, “Several discussions, workshops and seminars were held to examine the law and take into consideration what journalists, citizens and civil society organizations need in the Kurdistan Region.”

Speaking on the importance of this law, Jawhar stressed that the draft law was added to the list of laws on which a consensus must be reached between all blocs before they are discussed in parliament sessions.

He added, “Everyone agreed on a joint report that was re-drafted by consensus. The views and tendencies of all parliamentary blocs and those of civil society organizations and media institutions in the Kurdistan Region were taken into consideration.”

In this regard, journalist Rashid Abdul Aziz told Al-Monitor, “The most important thing in this law is the practical implementation and government commitment, particularly the implementation mechanism, appointing the spokespersons and the availability of information to journalists, media professionals and citizens.”

He added, “So far, we have not seen any cooperation from the government. These exceptions in the law will raise concerns and obstruct the work of journalists and citizens in accessing information, particularly in the military or security fields.”

Abdul Aziz stressed that there is no need for all these exceptions. He said, “We now live in a time when nothing can be hidden, and I think that these exceptions will negatively impact the atmosphere of the informational world we live in today.”