Rouhani calls for Moderation In First Speech as President-elect

In his first speech as president-elect of Iran, Hassan Rouhani said Iran should avoid extremism. 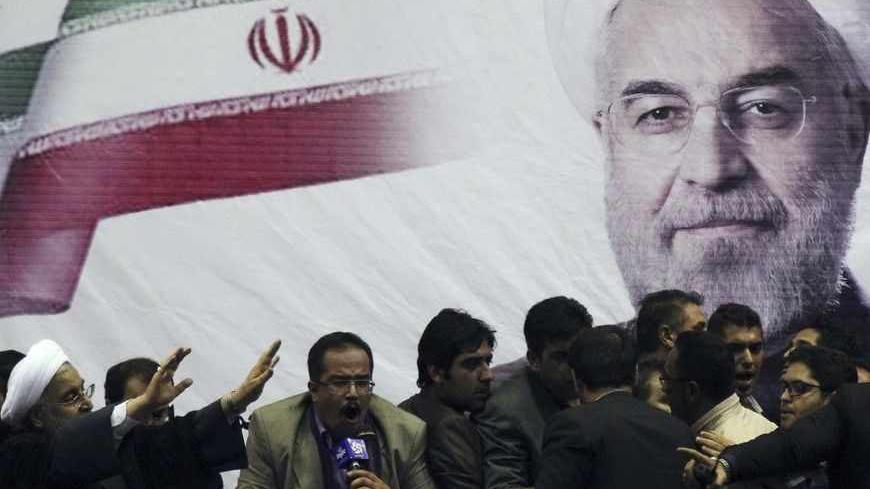 From the heart of Iran’s state media headquarters, President-elect Hassan Rouhani unveiled his reformist agenda on Saturday, June 29. “Iranians chose a new path. The future administration should act according to the majority of voters. Iranians voted for moderation and logic; the future administration should avoid extremism,” the president-elect said in his first official remarks after being chosen by more than half the population. Rouhani, who is said to be a centrist, seemed similar to  former President Mohammad Khatami in seeking to avoid confrontation with the West, but seemed like outgoing president Mahmoud Ahmadinejad when he objected to making compromise. “Moderation in foreign policy is neither surrender nor conflict, neither passivity nor confrontation. Moderation is effective and constructive interaction with the world.”

Rouhani used the words moderation and moderate more than 15 times in his speech, as if he wanted to present himself internally and externally as the man of moderation.  “Moderation should be present in every aspect of the country,” he said. “I believe Iranians have always preferred moderation; they suffered from extremism and negligence.” In these last words, it was as if he was attacking the outgoing Ahmadinejad — albeit without naming him. Rouhani sought from the beginning of his speech to draw a bold line between Ahmadinejad and the Islamic Republic that Rouhani will preside over: “This election was a response to all the accusations against the Islamic Republic and its purity. The Islamic Republic’s founder taught us that the country should be ruled by people according to Islamic laws.”

No conservative figures were available to comment on the record on Rouhani’s speech; even journalists said to be conservatives remained silent. I only received one comment from a journalist, who spoke on condition of anonymity: “No one is going to comment, the (supreme) leader spoke two days ago calling on everyone to help Sheikh Rouhani, so it’s not time to criticize him, but rather back him.”

While Rouhani was giving his speech, many Iranians were at work, so many only learned from the news that their president-elect had spoken. In the busy “Bazaar Tajrish,” only a few were ready to comment. Saied, a university graduate who works in a shop, had mixed feelings. He said, “I prefer not to overestimate the change that’s going to happen, it’s complicated, the sanctions aren’t going to be lifted and Ahmadinejad’s policies need at least four years to be uprooted.” According to Saied, the only part of the speech that really attracted him was when Rouhani spoke about freedom of speech and media. In the speech, Rouhani said, “The government that takes its legitimacy from its people does not fear the free media; we will seek help from their constructive criticism.” These remarks are unprecedented in Iran, taking into account the climate of the last eight years, and particularly considering that Rouhani called on the state media to avoid double standards in their coverage. Saied thinks this could be a good start if carried out.

Fatimah, a girl at Saied’s shop, said she thought there was one other interesting point in what she heard of Rouhani’s speech (she didn’t listen to the full speech, but did hear the last part of it in a taxi). “He said something about the government being for all Iranians and not one political current; this will lessen the confrontations,” she said. What Rouhani actually said was, “This administration is not from one political faction and is not committed to one party; we welcome every politician from any political faction, the only prerequisite is being moderate.”

It’s obvious that Iran’s new approach will mean a lot inside the country and out. Inside, this will probably give the government the chance to work without much headache from other political factions and activists. As for the outside world, everything will depend on the negotiating table and what is going to be offered on it. Rouhani himself knows this table very well and knows that in that part of the game, he won’t have the final word.

Ali Hashem is an Arab journalist serving as Al Mayadeen news network's chief correspondent. Until March 2012, Ali was Al-Jazeera's war correspondent, and prior to that was a senior journalist at the BBC.