By supporting the Syrian rebels, Hamas might have jeopardized for good its relations with its main weapon supplier Iran. 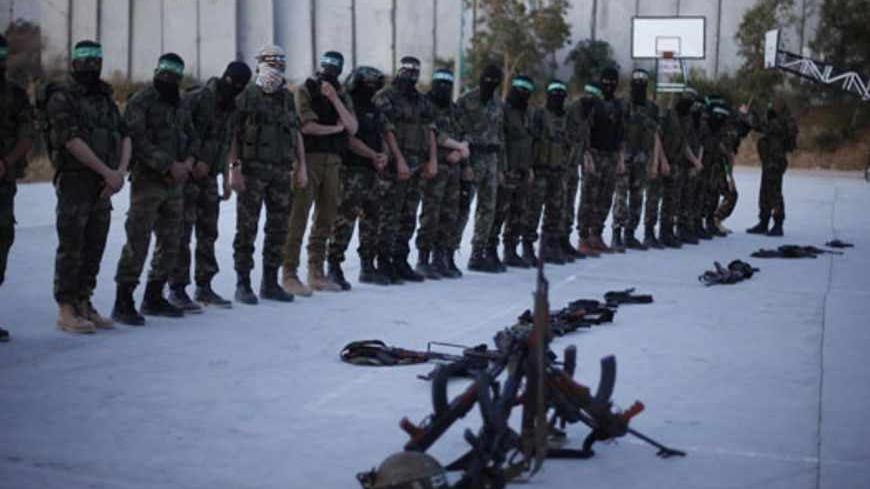 Hamas militants stand for prayer before a protest in the northern Gaza Strip, April 2, 2013. - REUTERS/Suhaib Salem

Days before the people of Iran head to the ballot box [June 14], Hamas is keeping a close eye on the elections, which will determine the fate of the movement’s relationship with its most important supplier of arms. Al-Monitor has learned that this is the background for the mounting tension between Hamas’ political and military wings. Head of Hamas political bureau Khaled Meshaal and his cohorts in the political leadership represent and lead the approach that the massacres in Syria — supported by Iran — constitute a moral red line, and that Hamas should never have ignored it. On the other hand, the military wing is deeply concerned by the depleted stockpiles of weapons in its warehouse. It believes that Hamas should have acted with greater prudence and maintained an open line of communication with Tehran, despite what is happening in Syria.

While the rest of the world is busy guessing and assessing the impact that the next president of the Islamic Republic will have on his country’s nuclear program, Hamas is worried about something else entirely, which is far more significant to the movement’s future. Will it be possible to mend its relationship with Tehran? This question has implications and a direct impact on the nature of the armed struggle against Israel, should there be one.

An article by Asmaa al-Ghoul, in Al-Monitor's Palestine Pulse, quotes Dr. Ahmad Youssef, a member of the Shura Council (the body that runs Hamas) and the former political adviser to Prime Minister Ismail Haniyeh. Youssef asserts, “Future ties with Iran and Hezbollah will not go back to normal. Both have taken part in the massacres against the Syrian people, despite the fact that we have advised them otherwise since the crisis began.”

Bassem Naim, Haniyeh’s adviser on foreign affairs, was also interviewed for that article. He added, “Iranian support to Hamas has certainly been affected following the movement’s stance in regard to the crisis in Syria.”

Nevertheless, it would seem that both men are ignoring one important issue. Hamas, with all its many branches, is currently in the midst of a bitter argument, if not an internal struggle, around several key issues: the nature of the relationship with Iran in the future, the rapid backsliding of both sides, the errors of the movement’s leaders and the lessons that should be drawn from the way Hamas has conducted itself with regard to Tehran. These pangs of remorse are being led by none other than the leaders of the movement’s military wing, Izz ad-Din al-Qassam Brigades, which is the main casualty of this tepid relationship. When those senior officials look at their stockpiles of weapons, which have not been replenished since Operation Pillar of Defense, they worry.

Ever since the middle of the second intifada, Iran has regarded Hamas as a major Palestinian advance front. It equipped its activists with an enormous supply of missiles, which could threaten the Israeli home front and make Israel’s decision-makers think twice before launching any attack against the Gaza Strip. In fact, during Operation Pillar of Defense, long-range missiles were fired from Gaza to Tel Aviv and Jerusalem for the very first time. While these missiles either fell into the sea or were shot down by the Iron Dome anti-missile defense system, Hamas could take pride in having forced the residents of Tel Aviv to head down to their bomb shelters.

Many hundreds of rockets were fired during Operation Pillar of Defense. Virtually all of them were Iranian-made. That stockpile has never been replenished. My colleague Alon Ben David wrote on this very site that the fact that the diminished supply was never replenished is evidence that Hamas is headed toward moderation and diplomatic change. Allow me to dispute this. The reason that the warehouses were not restocked isn't a perceptual change or one resulting from the moderation process Hamas is going through. Yes, I have written here on numerous occasions that these processes are underway in Hamas, and they are even occurring in the open. Nevertheless, neither the military wing nor the political leadership would consider this to be a reason to forego the accumulation of weapons of deterrence that actually threaten Israel, if only because the situation might change again, and they could find themselves in yet another armed conflict with Israel.

The reason that the stockpile of weapons in Hamas’ armories was never replenished is that there was no one to replenish it. It is only natural that operational capabilities determine how the movement acts on the diplomatic front. It is obvious to Hamas and its many branches that another armed conflict along the lines of Operation Pillar of Defense will not happen at any time in the foreseeable future. It will not happen as long as the movement lacks the operational capacity to stand up against a better military force with an arsenal of rockets that can threaten the major population centers in Israel. In other words, without Tehran, Hamas poses much less of a threat to Israel.

And there is something else, which is also quite obvious to Hamas. Its new guardian, Qatar's Emir Hamad bin Khalifa al-Thani, may be arming the rebels fighting Syrian President Bashar al-Assad, including terror cells affiliated with al-Qaeda (as has been written about frequently on this site), but under no circumstances will he act the same way when it comes to weapons that will be used against Israel.

The emir of Qatar is willing to provide sanctuary to the political bureau of Hamas, which turned its back on Assad and relocated to his country. He is prepared to invest in civilian infrastructure in the Gaza Strip and is doing so. He is even helping to pay the salaries of public sector employees in Gaza. On the other hand, supplying long-range missiles is not his business.

Iran’s absence is felt. In fact, it is sorely felt. That is why, in these very days, Khaled Meshaal, Ismail Haniyeh and the head of Hamas’ military wing, Marwan Issa, are taking a close look at the trends of the Iranian presidential election and asking themselves if there is any chance that they can mend their relationship with Tehran.

The answer seems to be they cannot. The possibility of Iran changing its attitude toward Hamas as a result of these elections is about the same as it changing its nuclear policy. US Secretary of State John Kerry iterated this quite clearly when he said on May 31 that there will be no such change. Hamas should reach the same conclusion. At no time in the near future will Tehran change its attitude toward Hamas, which is considered to be an “ingrate” that “bit the hand that fed it.”

But there is good news, too, as a result of this whole story: Without those stockpiles of weapons, one has to start talking.