Hamas sought an urgent meeting with Hezbollah to ease tensions after accusations that Palestinians affiliated with Hamas had fought alongside Syrian rebels in Qusair. 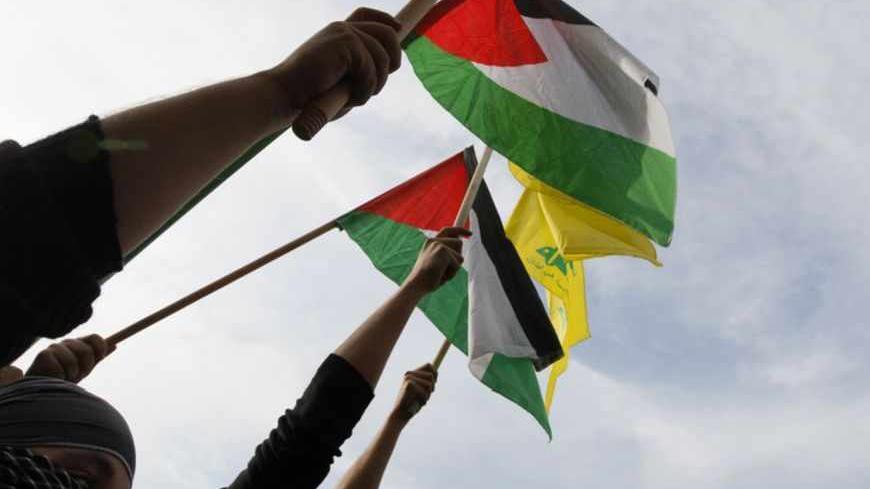 Hezbollah supporters wave Palestinian and Hezbollah flags during a demonstration against Israel's military operation in Gaza, in front of the UN headquarters in Beirut, Nov. 17, 2012. - REUTERS/Jamal Saidi

The conflict in Syria has stressed the relationship between the Palestinian Sunni Hamas movement and the Lebanese Shiite Hezbollah organization, transforming it from one of "intimacy" between allies to a tension-inducing "quarrel" after Hamas took a position against the Syrian government of President Bashar al-Assad and Hezbollah became involved militarily in supporting the regime.

Informed Palestinian sources, who spoke on condition of anonymity, revealed to Al-Monitor that members of Hezbollah had asked Hamas members residing in Beirut's southern suburbs to leave the area at the end of the battle for Qusair in Syria. The Party of God believed that Palestinians from Hamas had participated in the fighting against it and Syrian regime forces.

One source told Al-Monitor on June 10, "Following this tension, Hamas leaders in Lebanon contacted Hezbollah leaders and an urgent meeting was held between the two sides. Hamas strongly denied that Palestinian fighters affiliated with the movement had participated in the fighting in Syria." In addition, the source offered, "Following these high-level contacts, which involved Lebanese politicians, the two sides agreed that Hezbollah would back down on its demand that Hamas leave Beirut's southern suburbs, which is Hezbollah's stronghold. Most Hamas leaders live in this area, and it is home to the movement's main office."

On June 11, the Lebanese daily Al-Akhbar, which is close to Hezbollah, published "It's Forbidden to Criticize Hamas." According to the story, "Hezbollah had issued an internal circular forbidding party officials from commenting on or directing any criticism at the Islamic Resistance Movement [Hamas]."

The Kuwaiti daily Al-Seyassah had published a story on June 10 story quoting unnamed sources as saying that Lebanese General Security had stopped issuing visas to Hamas members at the behest of Hezbollah. While Hamas denied these reports, the Lebanese General Directorate of General Security issued a statement the same day confirming the freeze on the issuance of visas.

Lebanese General Security claimed the freeze was in response to an alleged "counterfeiting process carried out by some Palestinian elements, in which they used visas with forged numbers and dates granted to Hamas cadres, in an attempt to enter into Lebanon. This attempt was discovered by the General Security apparatus at Rafic Hariri International Airport." The statement also note, "The agencies involved in the General Directorate of General Security launched an investigation into this case, and will take the appropriate decision in light of the results of investigations, and after the case is referred to the competent court."

While Iran, Syria, Hezbollah and Hamas had for many years constituted a solid alliance, with developments in the Syrian crisis, Hamas leaders adopted the Muslim Brotherhood's anti-Assad stance, left its Damascus headquarters and allied with Qatar, the Syrian opposition's primary supporter. The recent revolutions in the Middle East and the rise of Islamists to power, have also contributed to reshaping the political map and shifts in alliances. This in part facilitated Hamas' exit from Syria, by allowing its leaders to move to Egypt as well as Qatar and freeing the movement of financial and military dependence on Iran.

Raafat Murra, a Hamas political officer who lives in Beirut's southern suburbs, confirmed to Al-Monitor in a telephone conversation on June 11: "[Rising] sectarianism, particularly between Sunnis and Shiites, has affected the relationship between Hamas and Hezbollah." According to him, "The relationship between Hamas and Hezbollah is different from how it is portrayed in the media. Yes, there is tension, but this comes as a result of the tense regional atmosphere and new circumstances that have confused most of the political forces."

He categorically denied that Palestinians were fighting in Syria, pointing out that the leaders of all the Palestinian factions, with the exception of the Popular Front for the Liberation of Palestine-General Command, had left Syria to avoid involvement in the conflict there.

Sheikh Yusuf al-Qaradawi, the spiritual leader of the Muslim Brotherhood, to which Hamas belongs, described Hezbollah as the "party of Satan." In a Friday sermon in Doha on May 31, he asserted that there was no place in the party for "good, religion or God" because Hezbollah is "fighting for tyranny" in Syria.

Salah Bardawil, the official spokesman for Hamas in Gaza, said in a statement to the daily Asharq al-Awsat (London), "We knew Hezbollah as a party that fought against Israel, but now it has committed a grave mistake by intervening in the Syrian crisis. This led to a decrease, and later total collapse, in support [for Hezbollah]." He emphasized, "Hezbollah's intervention [in Syria] was a huge mistake, and it would have been better for them not to get involved in this conflict. [This involvement] has caused the party to lose its share of popular support, and people now doubt that it is a resistance party."

In Khan Younis, the Hamas police forcibly dispersed a demonstration in May held in solidarity with the Assad regime following Israeli air raids on Syria. The demonstration was organized by the Popular Front for the Liberation of Palestine, and participants carried images of Hezbollah Secretary General Hassan Nasrallah and banners emblazoned with phrases criticizing Qaradawi's remarks on Syria.

The daily Al-Quds al-Arabi (London) alleged in a June 4 article, "The Qassam Brigades, the military wing of Hamas, decided to maintain its alliance with Hezbollah and Iran, as a way to liberate Palestine from Israeli occupation by force of arms, after Arab money failed to liberate a single inch of occupied Arab territories." Hamas leaders at various levels, as well as the movement's media spokesperson, have consistently denied reports that Hamas members are fighting in Syria against the regime and Hezbollah. They have also denied the existence of a dispute between the movement’s members in Gaza and those abroad or between its political and military wings regarding Hamas' positions on Syria and Iran.

Before heading to Cairo for meetings of Hamas' political bureau, Ismail Haniyeh, Hamas prime minister and deputy chief of the political bureau, said in a June 14 Friday sermon in Rafah, southern Gaza, “There are no disputes within Hamas, despite the claims of the yellow press and lurking mouths who continually tarnish the image of Hamas and the resistance.”

Hazem Balousha is a Palestinian journalist based in Gaza City. He has worked as a news producer for BBC World Service, contributed to Deutsche Welle and has written for The Guardian, Al-Raya (Qatar) and other publications. He is the founder of the Palestinian Institute for Communication and Development. On Twitter: @iHaZeMi