The Hamas movement seems divided as Syrian President Bashar al-Assad hosted a delegation of Palestinian factions leaders and praised all resistance factions, after years of estrangement with Hamas. 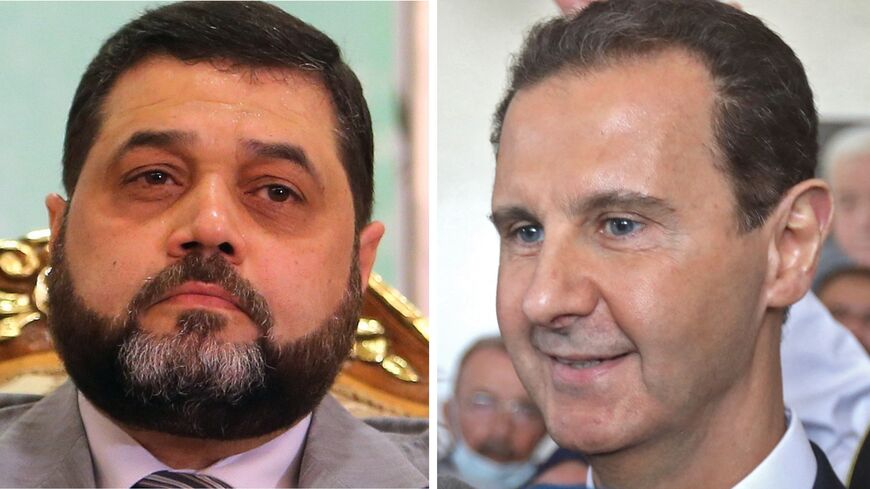 Hamas' leader in Lebanon, Osama Hamdan, attends a seminar titled "Jerusalem and Al-Aqsa: Between conspiracy and confrontation" in the Qatari capital, Doha, on May 11, 2014, while Syrian President Bashar al-Assad (R) speaks after casting his vote in the Syrian presidential race at a polling station in Douma, near the capital, Damascus, on May 26, 2021. - KARIM JAAFAR/AFP via Getty Images (L) / LOUAI BESHARA/AFP via Getty Images (R).

In the midst of the Israeli bombing campaign against the Gaza Strip, Syrian President Bashar al-Assad hosted in Damascus on May 20 a delegation of leaders of Palestinian factions with the exception of Hamas. During the meeting, Assad stressed his country’s firm position on the Palestinian cause and continued support for the Palestinian people's struggle and legitimate resistance.

In this context, Talal Naji, assistant secretary-general of the Popular Front for the Liberation of Palestine-General Command, told Beirut-based pro-Iran and pro-Syria Al-Mayadeen television May 20 that Assad praised the fighters of Hamas, the Islamic Jihad and all resistance factions in Palestine.

In turn, the deputy secretary-general of the Popular Front for the Liberation of Palestine, Abu Ahmed Fouad, also told Al-Mayadeen TV on May 20 that Assad informed the delegation that Syria’s doors are open to all resistance factions, regardless of their names.

Since the outbreak of the Syrian revolution in 2011, the relationship between Hamas and Syria has deteriorated. Hamas refused to support the Syrian government, and its leaders left Syria in late 2012. Despite Iran's and Hezbollah’s reconciliation efforts, Assad’s position remained unchanged, and he accuses Hamas of betraying him.

Hamas leader Osama Hamdan told Al-Mayadeen TV on May 20 that Assad's position in support of the resistance is not surprising. “We praise back anyone who praises us. It is only natural for the relations with Damascus to return to their previous state.”

Mahmoud Mardawi, a member of Hamas' national relations bureau, told Al-Monitor, “Hamas needs to have good relations with Palestine’s surrounding countries, including Syria. Our armed struggle needs military capabilities, combat capabilities, training and development experiences in countries close to Palestine. We recently got positive signs from the Syrian president regarding the relationship with us and we are not closing any door that serves our cause. So far, however, Hamas’ return to Syria has not been officially discussed with our leadership. Yet still, Syria, as a state, people and government, has expressed unchanged positions toward the resistance and we will not miss the opportunity to return to Syria and coordinate with its ruler.”

On May 21, Lebanon's pro-Hezbollah newspaper Al-Akhbar reported that during his meeting with the Palestinian delegation, Assad praised all the resistance fighters without exception.

The newspaper quoted a Hamas source as saying that the movement would start consultations with Hezbollah and Iran soon in order to test the Syrian waters as to the return of its cadres to Damascus. The source expected positive Syrian responses, without preconditions, which would open the door for the leaders of the movement to return to Syria.

However, in an interview with Russia Today on May 13, Khaled Meshaal, the head of Hamas’ office in the diaspora, denied any contacts with Damascus at the moment. “We stayed in Damascus for a while and it was a golden era of official and popular support,” Meshaal said.

Zulfiqar Swirgo, a member of the Central Committee of the Popular Front for the Liberation of Palestine, told Al-Monitor that the group “has exerted great efforts to heal the rift between Hamas and Damascus. After the recent Gaza war, the Palestinian cause entered a new phase. The Syrian-Palestinian relations must be solid to overcome the challenges facing the axis of resistance, including Hamas and Syria. The two sides must turn the page on the past and look ahead in order to confront Israel and its allies with a joint strategic plan.”

Despite the welcoming position toward a possible gradual reconciliation between Hamas and Syria, dissenting pro-Hamas Palestinian and Arab stances emerged two days after Assad’s message.

Mohammed Shinqiti, a Mauritanian expert on the affairs of Islamic movements, said he believes thanking Assad for his positive message is “outrageous.” In a May 22 tweet, he argued that Assad’s support would lead Hamas to lose its geographical and demographic depth.

Yasser Zaatareh, a Jordanian writer close to Hamas, said in a tweet May 22, “Any compliment addressed to Assad by Hamas is a self-degrading vulgarity offensive to Hamas.”

Palestinian writer Mohammad Moussa said on Twitter that praising Assad is “a great shame and a sin.” Ibrahim Hamami, a Palestinian analyst, tweeted that Hamdan’s statement on the meeting was “offensive, provocative and condemnable,” while Palestinian journalist Saleh al-Naami described the statement as “a lapse of judgment that offends Hamas, does not represent its position and betrays its supporters.”

Hassan Abdo, a political analyst close to the Islamic Jihad, told Al-Monitor, “The Gaza war made Hamas an important regional key player. It pushed Syria to take a step back instead of refusing to deal with Hamas, as it did in past years. It is now clear that Syria is accepting the movement’s return to its soil. This is a great gain for Hamas and the resistance axis, which is building up its alliances. Hamas will feel that it has a strong back in the region. Hezbollah and the Islamic Jihad have put great pressure on Hamas and Syria to open a new page, and Iran has entered the mediation line with full force.”

Still, it may not be of much benefit for Hamas to return to Syria despite the exchange of positive signs. Syria is mired in a civil war, has a devastated economy and has suffered losses of sovereignty. Meanwhile, the Israeli air force keeps hovering over its airspace around the clock. Israel could target Hamas leaders who return to Damascus.

Ahmed Hussein, a researcher on international affairs at the Doha-based Arab Center for Research and Policy Studies, told Al-Monitor, “The Hamas-Syria alliance between 2000 and 2011 benefited the movement in terms of military, logistical and military support. But things changed in 2021. The Syrian regime is facing several crises and has nothing to offer to Hamas, who just won the Gaza war. Hamas now is in an advanced position on the Palestinian political scene, while Assad has nothing to offer the Palestinian cause. Hamas’ decision to return to Syria or not will be taken based on a moral consideration. The movement knows that the Assad regime is a dictatorship that displaced the Syrian people and thousands of Palestinians. It believes the Assad regime has no practical presence in Syria, which fell under Iran's and Russia's control.”

The somewhat overt positive signals exchanged between Hamas and Syria may be followed by covert moves by mediators, namely Iran and Hezbollah, to translate these signals into action on the ground. Yet the possible return of Hamas to Syria could burden the movement as it would have to convince its popular bases and supporters who reject any normalization with the Assad regime.