No Improvement in Sight For Hamas, Hezbollah Ties

Hamas and Hezbollah are continuing on divergent paths concerning Syria, and the relationship will remain strained for the foreseeable future. 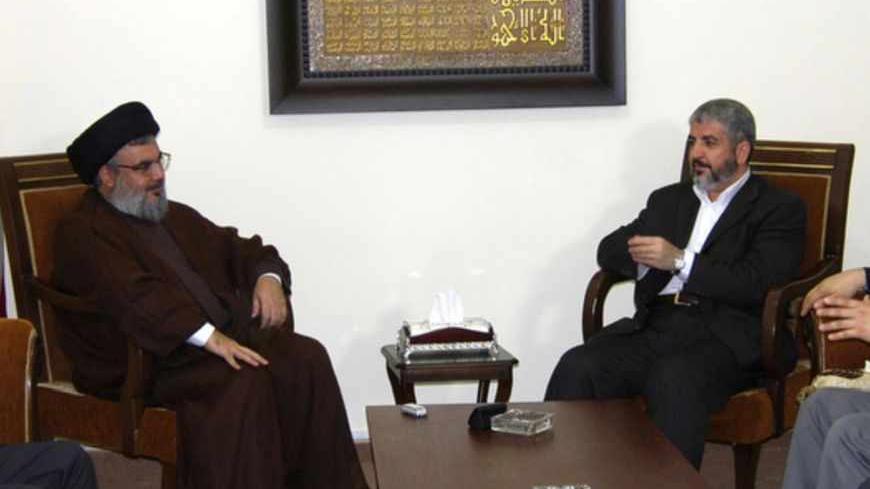 It is no longer a secret that the political relations between the two most prominent allies in the region for more than 20 years, Hamas in Palestine and Hezbollah in Lebanon, have significantly deteriorated in light of differences over the Syrian revolution and the emergence of new powers in the region after the Arab Spring.

In the past, Hamas and Hezbollah stood together in the so-called “axis of defiance” led by Iran and Syria against the “axis of moderation” led Egypt, Saudi Arabia and Jordan. Then the Arab revolutions spawned a “Sunni axis” led by Egypt, Saudi Arabia, Turkey and Qatar. Hamas saw itself as part of that axis, in opposition to the “Shiite axis” led by Iran, Syria, Iraq and Hezbollah.

This article will not analyze the historic dimensions of the Hamas-Hezbollah alliance, but will focus on their declining relationship, which reached the point of mutual media accusations in recent weeks.

The rift began when the Syrian regime started firing on peaceful demonstrators in May and June 2011. Back then, Hamas leader Khaled Meshaal advised Damascus to hold a dialogue with the protesters rather than resort to violence. Hezbollah leader Hassan Nasrallah made a similar request to Syrian President Bashar al-Assad, but was forced to stand by Assad’s side in the end, perhaps because of a request from Iran.

Despite their differences, Hezbollah and Hamas maintained a low-level relationship, at least through political contacts, conferences and the media. That lasted until Hamas decided to leave Syrian territory on Dec. 1, 2011. Hezbollah opposed the move because it meant Hamas had switched sides and joined the axis supported by Egypt and Qatar.

Despite this difference, Hezbollah kept quiet and did not openly criticize Hamas for leaving Syria, not wanting to irreparably break the relationship. Hezbollah issued an internal order preventing its officials from criticizing Hamas, but Hamas did criticize Hezbollah for participating in the Syrian war.

Hezbollah even took steps to meet with Hamas just last Saturday, June 15. Representing Hezbollah was the party official responsible for the Palestinian file, Hassan Hobbalah. They discussed the latest regional developments, ignoring the shaky relationship between the two parties.

Despite the desire by both parties to keep their disagreement in check, there have been some media leaks about tension between them on Lebanese territory, where Hezbollah has its headquarters and where some Hamas leaders live. Both sides feared that those leaks could result in clashes between their supporters on the ground.

On May 30, circles close to Hezbollah called on Hamas members in Lebanon to leave the country because of what Hamas said about Hezbollah’s participation in the Syrian war. That information was denied by Hamas representative Ali Baraka, who said that the main body of Hamas in Lebanon is in the Palestinian refugee camps and that the presence of Hamas members in Beirut’s southern suburbs, Hezbollah’s stronghold, is merely symbolic. He also said that Hamas’s relations with everyone, including Hezbollah, are still ongoing.

Interestingly, a senior Hamas official told Al-Monitor that the story was made up by Hezbollah in order to force Hamas to deny it and assert that the relationship is sound. And that’s exactly what happened.

Another problem arose when a Hezbollah field commander said that Hezbollah fighters in Qusair found explosive devices and some tunnels dug by the Syrian opposition fighters that closely resembled those of friendly forces outside Syria, alluding to Hamas.

He added that most of the Hezbollah fighters who died in Qusair were killed when dismantling improvised explosive devices. He said that those devices were planted and were made up of the same material and in the same way by which Hezbollah trained Hamas fighters. In his opinion, this meant that Hamas provided technical assistance to the Syrian armed groups.

In a major development in the strained relationship between the two parties, on Monday, June 17, Hamas issued a statement calling on Hezbollah to withdraw its forces from Syria and urging the party to keep its weapons aimed toward Israel only. Hamas said that Hezbollah’s military intervention on the side of the Syrian regime is contributing to the sectarian polarization in the region between Sunnis and Shiites.

Al-Monitor’s correspondent received information that confirms that this unprecedented statement was issued after a meeting in Cairo that grouped the Hamas leadership at home and abroad. This means that to Hamas, Hezbollah and Iran have gone too far in supporting the Assad regime despite its crimes against Syrian citizens. When the statement was issued, Iran had not yet despaired of attracting some low-ranking Hamas members to the Iran-Syria axis.

It is important to note that Hamas’ decision to criticize Hezbollah comes despite the fact that opposing voices are present, such as Hamas political leader in Gaza Mahmoud al-Zahar. He said he wanted to maintain the relationship with Hezbollah and Iran despite their differences over the Syrian revolution. There is also information that Marwan Issa, the Hamas military commander, sent a message to Khaled Meshaal calling on him to maintain the relationship with Hezbollah and Iran for military considerations, since the Qassam Brigades, Hamas’ military wing, has no alternative logistical and military support.

This coincided with reported claims by Israeli circles that Hamas is suffering from a significant shortage of missiles because Iran and Hezbollah ceased their military support after Hamas chose to side with the Syrian revolution.

However, the positions of Issa and Zahar, who in the recent elections lost his leadership post in Hamas, are marginal. Hamas issued a statement on June 13 that denied internal differences regarding Hezbollah and that a Hamas delegation visited Iran to ease the tension.

Therefore, the relationship between Hamas and Hezbollah/Iran will not be improving anytime soon for several reasons:

An objective analysis about the future of the Hamas-Hezbollah relationship is sobering for both parties. A few days ago, Al-Monitor met with a senior Hezbollah official in Cairo. When asked about the fate of the relationship, he said, “Hezbollah is going ahead in its support for the Syrian regime even if Hezbollah loses all his friends,” alluding to Hamas.