Hassan Rouhani's victory in the Iranian presidential elections caught Israel and the West by surprise. 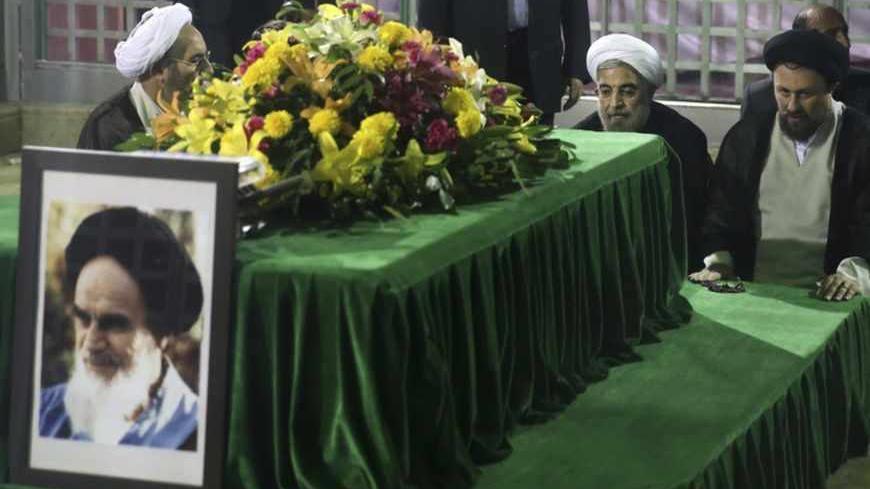 Iranian President-elect Hassan Rouhani (2nd R) pays his respects to the grave of the founder of the Islamic Republic Ayatollah Ruhollah Khomeini at his mausoleum in Tehran, June 16, 2013. - REUTERS/Fars News/Seyed Hassan Mousavi

At this point, no one can tell what will happen in Iran in the medium and long term following the election of Hassan Rouhani to the presidency. More is hidden than revealed. The situation is shrouded in mystery, and for any scholarly theory or well-reasoned scenario presented, totally opposite options, no less logically argued, may be suggested. Life and politics have a vitality of their own, as aptly demonstrated in the Middle East over the past two years.

Rouhani is no reformist. Anyone familiar with the ins and outs of Iranian politics knows it. He is a close associate of Iran’s Supreme Leader Ayatollah Ali Khamenei and served as his representative in the National Security Council for 16 consecutive years. In fact, Rouhani is the creation of the ayatollah's regime, its own flesh and blood. At the same time, he is soft-spoken and low-key. His worldview coincides in certain areas with that of the reformists. And he may thus be most accurately characterized as a "former conservative” who has not yet decided which path to follow. Once he makes up his mind, he may find out that it is not going to be a pleasant afternoon stroll. He is currently at a historic crossroads and he must choose his way.

There is one clear conclusion to be drawn from the surprising outcome of the election in Iran: The Western intelligence agencies are still incapable of anticipating moods, trends and undercurrents in other nations. Even the Israeli Mossad and the awesome Intelligence Corps of the Israel Defense Forces (IDF), including its massive surveillance unit, have been caught off guard in the wake of the Iranian election, notwithstanding the billions invested in recent years in monitoring the goings-on in Iran.

Over the last decade, at least, Mossad chiefs have been consistently explaining to those at the helm of the government that the Iranian people are fed up with its leadership, that the young people in Iran — who make up the majority of the population — loathe the ayatollah's regime, that Khamenei is standing on shaky ground. In practice, however, it turned out to be quite a different story. Faced with the general election, which featured five conservative candidates pitted against one marked as a reformist, no expert — either in Israel or the West — was perceptive enough to come up with the simple observation: Hey, pals — keep an eye on one by the name of Hassan Rouhani. If I am reading the map and the social networks correctly, this guy is going to beat the conservatives walking. The Iranian public is pinning its hopes on him. He is most likely to attract a major part of the electorate.

The Rouhani phenomenon was marked in red all over the virtual Iranian Facebook wall, but we still lack the tools to interpret it in time. The formula for deciphering social network traffic and translating it into numbers has not been found yet. This is rather strange, since the web provides the various intelligence agencies with truly amazing tools for analyzing moods and trends in populations living under oppressive regimes. However, so far, no real breakthrough has been made in terms of sounding the alarm bells.

The Arab Spring caught us all by surprise, no less so than the fall of the Berlin Wall, and the same holds true for the outcome of Iran's election. The most the Israeli intelligence could do was point to Rouhani or Mohammad Bagher Ghalibaf — the current mayor of Tehran, closely associated with the regime — as the more prominent candidates in the race for the presidency. Rouhani won massive support — five times more votes than Ghalibaf — and emerged the victor in the first round. The revulsion of the Iranians to anything that their regime stands for sparked a powerful and impressive chain reaction.

As to the intelligence forecasts, they have bitterly failed. Indeed, in retrospect, it may be noted that the Iranians would have cast 50.7% of their votes even for a Siamese cat, had it been running against that conservative quintet. The Iranians wanted a change. In the demonstrations of the “purples” held across Iran, the call was loud and clear: “No to Gaza! No to Hezbollah!” The masses in Tehran are sick and tired of the excessive involvement of their country in every regional focal point of fighting. They would rather have the focus on them — the citizens of Iran collapsing under the burden of sanctions.

In Israel, they already miss outgoing President Mahmoud Ahmadinejad. The prevailing assessment among decision-makers and intelligence officials is that Israel has lost a highly significant strategic asset (namely, Ahmadinejad), which was used to demonstrate, time and again, that the Israeli warnings regarding Iran were, in fact, accurate.

The election of Rouhani will grant the ayatollahs enough time to continue advancing the nuclear program. The dreams of an assault toward the end of the present year have faded into far-fetched wishful thinking. It looks like Rouhani is going to take his time and it will be months before the West can figure him out. This precious time period will be exploited by the Iranians to make further progress. And all too soon, it will be winter once again. As far as Israel is concerned, it is no less than a disaster.

The Israeli defense establishment is confident that, in essence, the international consensus on Iran will not be affected in the long term. “Whatever trick they pull, they will not be able to go on deceiving the world,” said a senior Israeli intelligence official. “The world already knows what's going on there. There is not even one Western leader who is not convinced beyond all shadow of a doubt that a highly advanced and most ambitious military nuclear program is well underway in Iran, and quite likely, already on the verge of completion.”

The leading Western intelligence agencies — those of the United States, Israel, Germany, France and Britain — are synchronized on the Iranian nuclear issue, down to the level of the individual centrifuge. Rouhani will find this difficult to change, though what he may change is the rhetoric. He will speak softly, strive for reconciliation and stop the ranting and raving. He will embark on state visits to a wide range of capitals, probably also in the West, and he will take advantage of the inherent naivety of some of the "Free World" countries. Even US President Barack Obama will not be able to remain indifferent. Obama, who has adopted a policy of “diplomatic soft talk, while holding a small carrot in hand,” will have to blink first, if only for the record. That’s all the Iranians need — nothing more than that.

The first shot in the battle has already been fired the week of June 16, when the Russians hinted that Iran would be willing to suspend uranium enrichment, keeping it at the 20% level. Israeli Prime Minister Benjamin Netanyahu was quick to respond, saying that such a move would be merely cosmetic, and that nothing short of complete cessation of uranium enrichment, removal of all enriched uranium out of Iran; termination of nuclear facility activities and welcoming the International Atomic Energy Agency (IAEA) would provide sufficient guarantee of Iran's willingness to abandon the nuclear program. Needless to say, this will never happen.

Some Israeli experts believe that there are clear indications that, far from being a reformist, Rouhani is a conservative “planted” by Khamenei as a Trojan horse, a wolf in sheep's clothing. If true, this is a brilliant, successfully accomplished plan. Following are its main points: Khamenei is certainly not stupid. He knows his people. He realizes that the masses in Iran are fed up with him, with the ayatollah's regime, the Basij militia and the Revolutionary Guards. He is well aware that he is living on limited time, that he is not infallible and that nothing lasts forever. He is in urgent need of an outlet for draining the simmering anger of the Iranian citizens, so that he may control the unrest. Thus, looking around, he spots Rouhani, whom he himself has reared and nurtured, and assigns him to the task.

Rouhani is designed to serve as the drain for the ire of the masses — the national tranquillizer. Rouhani is supposed to be the "as-if" reformist. The next step is to deliberately dismantle the seemingly oppositional conservative camp, splitting the vote so as to ensure him the best chance. And indeed, Rouhani wins the first round, passing just a fraction of a percent above the 50% barrier — without any need for falsification of the results by the regime. Quite the opposite! The regime hurries to declare the victory on election night, to forestall the danger of a counter shock wave sweeping the streets. After all, experience shows that in the Arab world, such shock waves are liable to evolve into a full-fledged revolution within days.

Now Khamenei is on the Trojan horse: The president-elect is his close associate, and while he is making sounds of reform, no real change is likely to occur. It will take the Iranian people a few years to realize that they have been cheated. Meanwhile, on the same ticket, the rest of the world is also being fooled. Rouhani will rehabilitate the image of Iran, turn a new page in Tehran’s relations with the international community, win over hearts and raise new hopes. By the time the enlightened — and naive — world realizes that it has been misled, Iran will have in its possession no less than five Shahab missiles with nuclear warheads. And then, it will be an altogether different game.

Nonetheless, it should be kept in mind that the above scenario is a conspiracy theory. It may well be that Rouhani is an authentic reformist, and that with time, he will take courage, enlist widespread public support and, who knows, even confront Khamenei. It could be, after all, that Iran is facing a historic change, that there is still hope and that the dim light at the end of the tunnel is not an ominous locomotive rushing on to smash us, but rather an opening to a new reality.