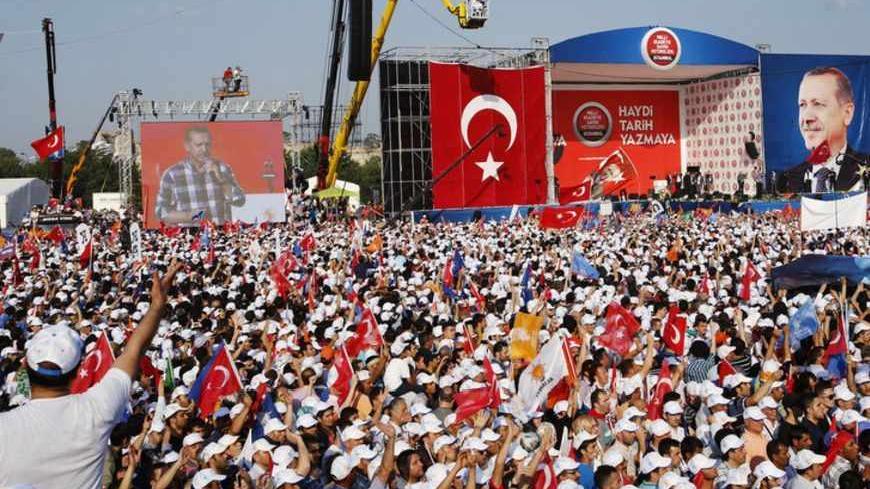 It was deeply worrying that Turkish Prime Minister Recep Tayyip Erdogan continued to paint the Gezi Park protesters at his June 16 rally in Istanbul as anti-Muslims. “Those who enter mosques with their shoes; those who consume alcohol at mosques; those who abused my sisters with head scarves on the streets, are you happy with what you have done?” he asked.

But the video footage from inside that mosque on the night of June 12 make it clear that the mosque was turned into a medical emergency station for many injured by the police’s excessive use of force. And it’s dubious how many women with head cover were verbally or physically abused. Many women with no head cover unfortunately face those challenges, too.

But while the prime minister uses religious symbols in his rallies criticizing those protesting his policies, the obvious question that needs to be discussed is this: Why is the prime minister using such dangerous rhetoric, provoking one segment of the society against the other, creating concern about Turkey's taking an even more religious turn? It’s also becoming more difficult to agree with Erdogan’s claims that he has never interfered in people’s lifestyles — as even those protesters he’s bringing under a religiously provocative spotlight are Muslims. Does he see in himself the right to quantify people’s religiosity?

“It’s true that Turkey does not become a Saudi Arabia, Iran or a Malaysia. But, by the same token, it does not turn out to be a Germany, Britain or Italy. It took so many long wars for them to get to where they are today; they have suffered a lot due to sectarian fighting. Thank God, we haven’t suffered as much,” Beyza Bilgin, a prominent theology professor in Turkey, told Al-Monitor. “Some friends interpret the prime minister’s usage of those religious symbols [in these rallies] as a message to his own base, conveying, 'I haven’t forgotten about your sensitivities.' After all, he has not yet made it legally possible for women with head scarves to work freely at government offices. It’s not clear how long they can remain patient on this issue.”

Sahin Filiz, a professor of philosophy at Akdeniz University, however, argues that the answer to that question is not really so clear. “There are strong forces within Turkey that are trying to pull it toward a religious practice oriented around the Wahhabi/ Salafi interpretation of way of Islam,” he told Al-Monitor. “The more the prime minister uses these religious symbols in such a sensitive way in public rallies, [and where we know that these are all contested claims], he encourages those who embrace the Wahhabi or Salafi interpretation of Islam, consciously or not. And there may come a time when he may not even control their demands on his government.”

Beyza Bilgin carries the same concern without reaching any conclusion on how society might be affected by such demands. First of all, she doubts that Erdogan’s attempts to accuse the Gezi Park protestors as anti-Muslim people will get anywhere. “It’s important to recall that [the late Welfare Party leader Necmettin] Erbakan was the one to use religious symbols the most, but he got a small amount of votes in the elections. If religious symbols can bring so many votes, I just hope that this will continue to remain at the same ratio as we have seen over the years.

"Here, the most important thing to follow is the women’s approach to this issue.”

It’s also worth remembering that the Justice and Development Party [AKP] government is like a party of coalitions, composed of people from almost all walks of Turkey’s political life. They’re not all coming from the Islamic base. The reason they came to power in 2002, and stayed in power until today has more to do with the country’s economy than anything else. And it’s clear in Ankara’s beltway that not all AKP members are in line with Erdogan’s explosive remarks over the allegations concerning people drinking beer in a mosque; or stepping on its carpets with their shoes.

There is, however, no surprise that religiosity has always been measured by women’s outward appearance. The Religious Affairs Directorate, for example, had conducted a controversial public opinion poll in Izmir in March 2013 in an attempt to measure people’s religiosity. “They asked people questions like, 'Do you cover your head? Do you feel like covering your head while going outside? Do you read the Quran? Would you wish to read the Quran in Arabic?” Filiz, the professor at Akdeniz University in Izmir, told Al-Monitor. “If the issue is to measure one’s religiosity, the questions should have been 'Did you ever engage in corruption? Did you ever on purpose, consciously accuse an innocent person? Did you ever lie?' Questions like those should have measure one’s religiosity, not the head cover.”

“The prime minister does not really get the Gezi Park protestors right. Maybe it was only 10 out of 100 with head cover there, but no one should misread what that 10 stands for. These are people who have grown up with Ataturk’s principles — making them members of a civilized world. The religious people sometimes, however, fall into the trap of feeling guilty in balancing their desire to be open to that moderate world, and complying with the rules [of a strict interpretation] of Islam.

"The problem is, if the ruling party continues to pump these religiously sensitive issues [and claim those protesters stepped into the mosque in their shoes; drank beer; and, abused women just because they wore a head cover], it can create a larger crowd than what it is today, and they may grow even more sensitive to these religious issues, and start asking the government to impose Islamic rules with more passion.”

Indeed, a recent survey conducted by MetroPOLL Strategic and Social Research also proves that Erdogan failed to understand the message from the protesters.

After all that was lost in blood and treasure in the past two weeks, Erdogan committed himself to wait for the final decision of an Istanbul court, which carried a midway decision on May 31 of a “precautionary hold” on moving ahead with any construction at Gezi Park, and taking the issue to the public with a plebiscite. Whether this plebiscite can be interpreted as confidence vote on his leadership or not, the survey results show that he lost 11 points in support of his government compared to June 2012.

Accordingly, if there were an election today, AKP would get 35.3% of the votes.

The survey found 49.9% believe that the government is moving toward an authoritarian and repressive style of governance, while 36% think its policies are helping the country to advance its democracy. Moreover, 62.9% of those polled said they want to see the Gezi Park stay as is. When Today’s Zaman published the results of this survey today [June 17], it also wrote, “a majority of those who said they voted for the ruling AK Party were against the building plans.” Only 23.3% expressed support for the government’s proposal of building the replica of an Ottoman Artillery Barracks there. Last but not least, the survey found that 54.4% believe government is interfering with their lifestyles, while 40.4% disagreed.

Both professors  agree that women — with head scarves or not — will determine  how Turkey will end this battle over defining religiosity, and whether everyone can harmoniously exist together.

“The Gezi Park protests were a reflection of a number of accumulated grievances about the Justice and Development Party’s policies for the past eleven years,” Filiz told Al-Monitor. “But there are also those on the religious side, in places like Konya, for example. It’s a very modern city with its buildings, shopping malls, infrastructure, and roads, name it. Many people there, however, have adopted a very strict religious practice such that their definition of conservatism is unique unto themselves. It’s as if they're making a statement like, 'We may live in the city, but we won't become urbanized.'

"That place is no different than an open-air prison. Living in such a way, you may wonder as to whether the next reaction would come from within those conservative communities, because many consider themselves as being trapped in a golden cage. They also have issues in that camp, too.”

In brief, Erdogan’s rhetoric during the Gezi Park protests has only helped to make things worse. The ideal would be a more inclusive, constructive, and calm rhetoric that brings both sides together — not as a divided people based on their way of approaching God.

But these developments show that it’s possible that this may not be Erdogan’s goal —  as he might be pushing an agenda to make Islam more dominant face of the country, wedging away from the principals of a democracy, where people should have the freedom of and from religion.

At the same time though, he continues to openly state that “secularism” is the only way going forward in strengthening the country’s democracy, which may suggest that he also is not clear about where the prospects and limits of his religiously motivated statements and reforms may take the country.