Similar stances between Egypt’s liberal and Salafist parties concerning the rule of the Muslim Brotherhood could pave the way for an unlikely electoral coalition. 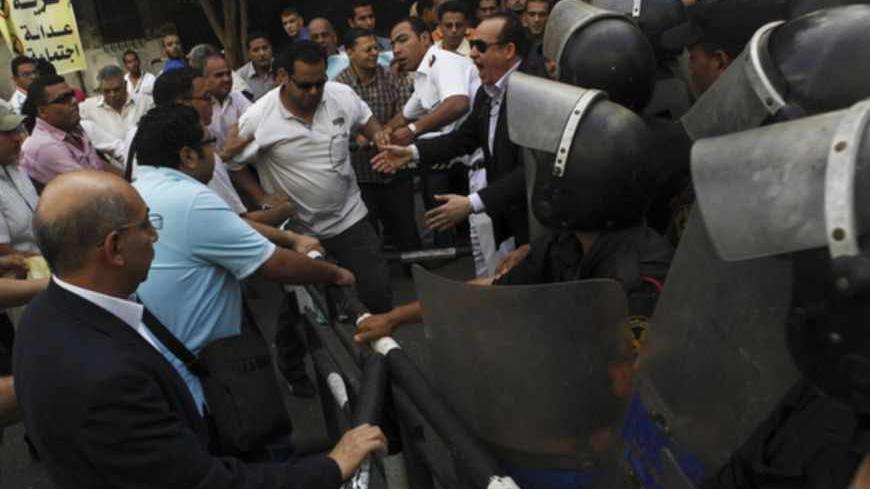 Members of Egypt's opposition shout slogans against President Mohammed Morsi and members of the Muslim Brotherhood as they clash with riot police during a protest against the new judicial law in front of the Shura Council in Cairo, May 25, 2013. - REUTERS/Amr Abdallah Dalsh

DOHA — Various Egyptian opposition voices stressed the need for “political consensus and security” before addressing the country’s economic woes during discussions at the U.S.-Islamic World Forum, held June 9–11 in Doha. The forum, hosted by the Brookings Institution, sought to assess Egypt’s dire economic situation behind closed doors, with participants representing a broad spectrum of the country’s political scene.

According to opposition figures who attended the forum, Egypt’s ongoing security woes and continued political instability are fueling the economic downward spiral and must therefore be the first to be addressed.

“We want a political consensus. You can’t do it otherwise. Which investor, Egyptian before foreigner, would agree to work in such an environment?” asked Pacinthe Fahmy, deputy head of the Al-Dustour Party, led by former International Atomic Energy Agency chief Mohammad ElBaradei, speaking with Al-Monitor on the sidelines of the closed discussions.

Tarek Shaalan, co-founder of the Al-Watan Party, a breakaway from the conservative Salafist al-Nour Party, agreed. “Every time the credit rating went down, the first statement of every report was about the political instability. We have lots of challenges ahead, but two things need to be implemented before we move forward: security … and political consensus,” he told Al-Monitor.

Leftists, liberals and Salafis were unanimous in their criticism of the ruling Muslim Brotherhood’s management of the country post-revolution. Shaalan and Fahmy both criticized President Mohammed Morsi’s go-it-alone approach, a position reflected by other Egyptian figures at the forum, including prominent leftist activist Wael Khalil. “[Morsi] had the chance and had everyone who was willing to cooperate. The Brotherhood squandered that chance, not only by not utilizing it, but also by really demonizing others,” Khalil said to Al-Monitor.

Hossam Bahgat, founder and director of the Egyptian Initiative for Personal Rights, told Al-Monitor that Morsi had breached the trust of those willing to cooperate with him by resorting to “authoritarian” measures.

“We engaged with the new government, and we wanted them to succeed. The combination of authoritarian rule, particularly with the drafting of the constitution, and police brutality and the absence of any accountability, and the incompetence and sheer failure to deliver basic services … has breached the trust,” Bahgat said. “Morsi has lost most of the support he had from some centrists, liberals or leftists, and even some Salafists now are voicing opposition to him,” he added.

The loss of Salafist support was apparent in Doha, with Shaalan highlighting the failure of the Brotherhood to undertake necessary reforms that might have helped stave off the current economic crisis.

“There were quick remedies that should have been done, and [the Muslim Brotherhood] didn’t. They missed them all, and that was shocking to me,” said Shaalan. A reconciliation process should have been initiated by Morsi that would have allowed experienced public servants from former president Hosni Mubarak's government to remain, Shaalan asserted.

“You still had some money, and you still had some reserves at the beginning of the revolution. This revolution happened because people wanted the economic situation to change. We have a lack of education because we didn’t spend on education. We don’t have enough energy. Even if you want to build new factories, there’s no power,” Shaalan said.

One key point of criticism is the Brotherhood’s failure to reform the subsidy system, which all the opposition representatives at the Doha forum agreed still benefits the rich instead of the poor.

“The net subsidies are going to the upper few in society, and this has to stop,” Khalil said. “You don’t subsidize the rich. In Egypt we’re subsidizing the rich. It’s been there since Mubarak’s time. I’m not saying cancel subsidies; we’re saying direct the subsidies to those who need it,” Al-Dustour’s Fahmy concurred.

Not short of criticism of Morsi’s economic management, Fahmy also lashed out at his failure to curb unnecessary state spending. “There are ways of decreasing spending. We have 33 ministries with large Mercedes cars. The United States doesn’t have 33 ministries,” she said.

The Brotherhood’s failure to enact necessary reforms is due to its ambition to replace Mubarak’s stranglehold on Egypt’s institutions with its own, Fahmy contended. “The Muslim Brotherhood … have only one objective, which is to become the deep state. They want to change the face of the business people with their business people. They want to appoint their governors. They want to control the country. This is what they’ve been working on,” she said.

Despite the opposition's seemingly united stance on Morsi’s performance, divergence emerged in regard to the proposed $4.8 billion IMF loan to Egypt. The liberal Al-Dustour and Salafist al-Watan were in accord on the need for the loan, to pave the way for further investment in the country.

“It’s a quick fix, and it’s the right fix. Without the acceptance of the IMF reform program, no one else will give us a penny,” Shaalan said.

While Fahmy agreed with that premise, she stressed it would be impossible to obtain the loan without certain factors being addressed, saying, “They need to [reach] a political consensus first. Then they need to work on security, then you get the IMF loan. You cannot get it without those two.”

Khalil has long objected to the IMF loan, arguing that the Brotherhood and opposition have both failed to “do their homework” to explore other possibilities for addressing Egypt’s economic woes.

“Have you really exhausted your resources? It’s easy to borrow. It’s addictive, and you’re not the ones who are going to bear the burden of that,” he said. The focus should not be on reducing Egypt’s current account deficit, but directing public spending to properly address the most pressing economic needs and raise living standards, Khalil argued. “Can we stomach a bit of a deficit for a couple of years until we’re back on our feet? Is this a time for austerity?” he asked.

Bahgat agreed, warning that imposing austerity measures now in Egypt would only fuel further social unrest. “The worst thing that could happen right now is a program of austerity, especially now that the IMF is acknowledging that austerity didn’t work for Greece, but this is what is being prescribed for us,” he said.

“We would be against, of course, any cuts in public spending right now. We think what is needed is an overhaul of the economic policy of the Mubarak era altogether,” Bahgat added.

The coalescing positions of the liberal and Salafist parties have raised the unlikely prospect of an electoral coalition against the Brotherhood.

Fahmy was also open to the idea of working more closely with Salafist groups on ousting Morsi from power. “Yes, the Salafis are welcome — they’re moderate, at least,” she said.

All eyes now turn to June 30, when a mass anti-government protest is set to mark Morsi’s one-year anniversary as president. Bahgat is concerned about the “security response” to the protest because of the potential to fuel violence. Fahmy, whose party has fully endorsed the campaign, brushed aside such concerns.