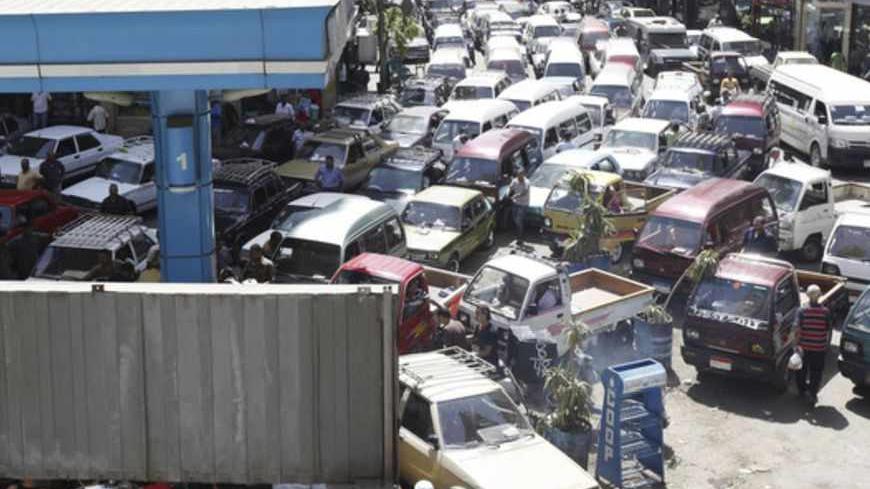 By Wednesday afternoon, June 26, traffic in Cairo went from a gridlock of cars jammed around gas stations to eerily empty as the gas shortage discouraged drivers from going out. By Thursday, traffic jams were again at their worst, with people complaining of commutes taking hours. Worried about escalating tensions with the gas shortage hitting the country before protests planned for June 30, many offices have been letting their employees stay home in preceding days.

Despite the long lines and Tarek el-Barkatawy, head of the Egyptian Gas and Petroleum Company, acknowledging a gas shortage at a press conference earlier in the week, Minister of Petroleum and Mineral Resources Sherif Hadarra denied any shortage on June 26. While Hadarra blamed the long lines at gas stations on false rumors that the government intends to halt the supply of gas products, el-Barkatawy reported that the current rate of gas consumption is exceeding normal levels by 20 to 30%.

Saad Abdel Magid, a Cairo taxi driver, also pointed to Egypt’s diminishing foreign reserves, which are a major factor underlying many of the nation's problems. “The country doesn’t have money, so the country doesn’t have gas,” he said while staring in frustration at a downtown traffic jam of cars haphazardly lined up near a gas station.

In a report issued June 25, the office of the president blamed the lack of fuel on the lack of foreign currency, but also cited smuggling and the black market for the shortage.

Oil-rich Iraq and Libya agreed to deals in March 2013 to supply oil to help ease Egypt's fuel shortages, but they both fell through in June. Indicative of a lack of confidence in Egypt’s economy, the talks ended when Iraq rejected a guarantee by the Egyptian Central Bank for the $1.2 billion value of the oil.

For Manar el-Barrawy, a private language instructor who depends on her car to reach her students, the lack of financial reserves, smuggling, hoarding all seem like plausible reasons for the gas shortage. She also thinks that the government’s ineptitude in monitoring fuel supplies and acting accordingly has a lot to do with the current problem. She told Al-Monitor, “Nothing is really clear.”

Of concern to her is that the current shortage represents the government’s continued failure to find a solution to the gas shortages. In the two years since the revolution, Egypt has faced repeated fuel crises as the economy has deteriorated.

Regardless of the reasons, the consequences are the same: People line up for hours in front of gas stations and tensions run high. Amira Erfan, who works at an educational non-profit, joked to Al-Monitor, “People bring their water and sandwiches and charge their phones and laptops before coming to the gas station.”

Speaking by phone as she waited in line to get gas, Erfan said that her average wait time is two hours. The car behind her, already out of gas, was pushed forward as the line painstakingly progressed. It's “everyone’s worst nightmare,” she commented.

Long lines, high temperatures and edginess about what the next few days will bring are exacerbating Egyptians' frustrations. Ahram Gate reported that a student waiting at a gas station in Cairo was killed by a stray bullet fired during a dispute between two drivers over whose turn it was at the pump.

The latest gas crisis falls prior to the highly anticipated June 30 protests called by the Tamarrud movement demanding that Morsi step down for his failure to achieve any of the revolution’s goals. The demonstrators plan to march to the presidential palace to present their demands to Morsi on the one-year anniversary of his inauguration. Pro-Morsi groups have called for counterdemonstrations on June 28 and held a similar rally on June 21.

While some believe that the gas shortage may encourage more people to go into the streets, others fear that people will instead blame the shortage on the protests. According to Erfan, the gas crisis is “effective in making people angry.” She believes that the turnout on June 30 will be higher than expected because the gas crisis will incline previously reticent citizens toward protesting. While Erfan does not plan to participate in the protests, she acknowledged, “If we suffer this crisis for a few days, and then get rid of Morsi, I’m happy with this.”

This particularly concerns her because, she said, “Finally, the people who are of Islamist leanings are beginning to change their minds and see that Morsi isn’t the best option for the country, but now, because of the gas crisis, they might go back.”

In a major speech lasting more than two hours on June 26, Morsi again failed to offer satisfactory solutions to the economic and political crises currently facing the country. Addressing the fuel crisis, he began by telling Egyptians that he has seen the gas lines himself and would like to wait with them. He also personally apologized for the shortage and expounded on a new smart card system to help prevent smuggling by suppliers and threatened to withdraw the licenses of gas stations found to be hoarding.

Regarding the political crisis, he promised a national reconciliation committee comprised of political parties, religious institutions and revolutionary forces tasked with overseeing a national dialogue. While he has proposed the same approach many times in the past, it has yet to achieve success and resolve the differences between the political factions.

Morsi repeatedly warned Egyptians to beware of foloul, remnants of ousted president Hosni Mubarak’s regime, and of political opportunists capitalizing on the revolution for their own benefit.

For many Egyptians, their hopes and worries are now pinned on June 30. For Mohamed Mostafa, a Cairo taxi driver, the dwindling supply of basic commodities and soaring prices is enough to catalyze change. He told Al-Monitor, “All people will descend on the streets on June 30 against Morsi — I’m one of the them — and we will find a solution.”

The most obvious solution to many Egyptians is another takeover by the military, which governed the country after the revolution from February 2011 until June 2012. While not everyone is enthusiastic about that option, a skeptical Efran observed, “There is nobody else to take the lead.”