Iran Fears Partnership on Syria Between US, Russia

If Russia and the United States start cooperating to resolve the Syrian crisis, Assad may forced to jump into Iran’s lap. 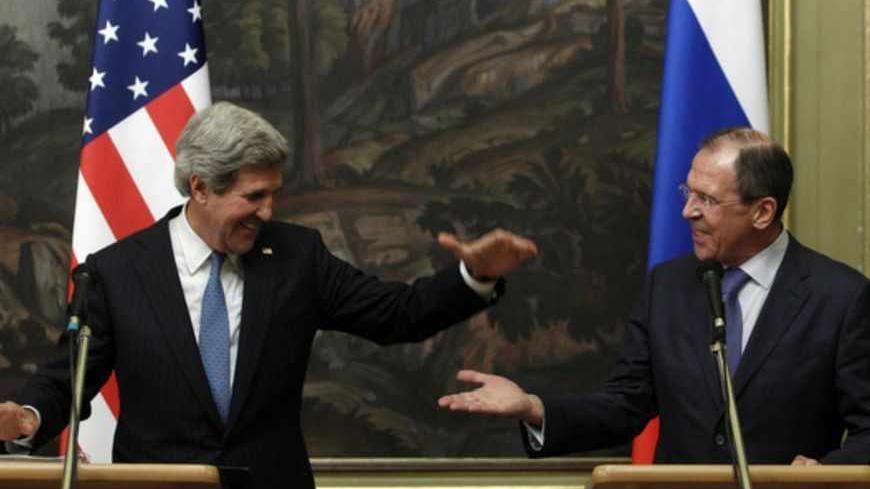 Russia's Foreign Minister Sergei Lavrov (R) and US Secretary of State John Kerry react during a joint news conference after their meeting in Moscow, May 7, 2013. - REUTERS/Sergei Karpukhin

The Israeli strike on Damascus has revealed the Syrian regime’s inability to prevent a major external military intervention in Syria. The raid showed that Syria’s Russian-made air-defense system cannot protect Syria from an attack by warplanes coming from outside Syrian territory. Therefore, the Russian air-defense system will be useless if NATO decides to conduct a strategic air strike on Syria. The Russian military and political cover that Syria enjoys may not be able to prevent the US and NATO from attacking Syria if they choose to bypass the UN Security Council, where Russia has veto power.

All these indications suggest that Moscow’s protection for the Syrian regime may be only political. It should be noted that the latest Lavrov-Kerry understanding was conditioned on President Bashar al-Assad’s commitment to apply the full terms of the Geneva Accord. But that accord has vague portions, such as those about Assad’s fate, and those vague portions are now being negotiated between Moscow and Washington.

So the recent US-Russian partnership on resolving the Syrian crisis may harm the unity between Russia and Iran on which Assad relies to stay in power.

According to informed sources, differences between Russia and Iran on the shape of a final Syrian settlement have recently emerged. Moscow believes that a Syrian settlement should involve a transitional phase without Assad stepping down. Tehran holds that the solution should be a package deal between the United States and Iran over all the region’s issues, from the nuclear file to Bahrain, Syria and the Israeli-Palestinian conflict.

The United States favors solving the Middle East’s issues separately. Regarding the Israeli-Palestinian conflict, Russian President Vladimir Putin is acting separately from Washington since he got a moral cover from the Arab League in which his rich Gulf allies became the main power after the paralysis that struck Egypt, Iraq and Syria.

On the Syrian issue, Washington is not involving Iran and favors recognizing Moscow’s influence in Syria provided it comes at the expense of Iranian influence. Therefore, despite their differences on the Syrian issue, Obama and Putin agree on forming a partnership through bilateral meetings between US Secretary of State John Kerry and his Russian counterpart Sergey Lavrov to apply the Geneva Accord. It is true that the Geneva Accord is hard to implement, but observers believe that Lavrov is using that point to open the door to Russian-American negotiations about Assad in the Syrian settlement.

Russia is now helping Iran bypass the Western-imposed economic and financial sanctions, but Iran is giving Russia nothing of strategic value in return. Thus Iran is expected to be more accommodating to Russia, but Iran cannot afford to see its influence in the Arab Levant erode, especially in Syria, Lebanon and Iraq.

During the past two years, Putin has tried to increase Russia’s influence in those countries. He used the Syrian crisis to raise Russia’s international standing. Putin sent Lavrov to Iraq, and then Iraqi Prime Minister Nouri al-Maliki visited Russia in an attempt to end the distrust caused by Russia’s support for deposed Iraq ruler Saddam Hussein. Putin sent Deputy Foreign Minister Mikhail Bodganov to Lebanon to signal that Moscow has a say in that country. Bodganov met with more than 15 Lebanese figures and parties as a sign of Moscow’s openness.

Tehran is watching the Russian bear spread its influence in countries that Iran considers essential for its own influence.

In this moment of Russian-Iranian harmony caused by their mutual need for support in facing Washington, it is not clear how this relationship will be affected if the US-Russian partnership succeeds in resolving the Syrian crisis separately from Iran. Will it cause the Russian-Iranian contradictions in the Levant to explode? The more difficult question, which Assad wishes he will never have to answer, is whether the Russian-American partnership will one day force Assad to choose between Russia or Iran.

Some think that if Assad feels that the Geneva Accord will remove him from power, he will dump Moscow and jump completely into Iran’s lap. But if he feels that the Russians will guarantee his survival, he will become more inclined to accept Russian protection rather than be protect by Iran, a country hated by Washington, Tel Aviv and the Arabs.

Assad would prefer not to be forced to choose between Iran and Russia. But the future will be determined by the international developments in the Syrian crisis, not his wishes.