Cold Start in Tehran As Elections Heat Up

Excitement over Iran's presidential election is missing, despite election day being two weeks away. 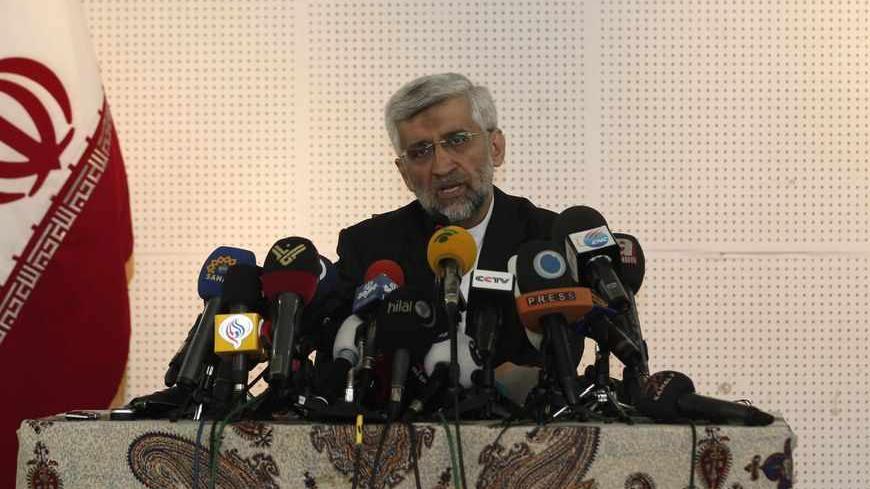 Saeed Jalili attends a news conference at the Iranian Consulate in Istanbul, May 16, 2013. - REUTERS/Osman Orsal
Mani Fardad
May 31, 2013

The June presidential election in Iran is approaching and the campaigns are escalating, but there is little sign of excitement about the election on the streets of Tehran.

Unlike the previous presidential election in 2009, it seems that the final candidates introduced by the Guardian Council have failed to organize their supporters mainly because they have not emerged from a clear structural basis formed by influential political parties. According to the constitution, all Iranian citizens who have been born in Iran, believe in God and the official religion of the country (Islam), have always been loyal to the constitution, and are more than 21 years of age are allowed to sign up as candidates to run for the presidency.

Lack of clarity is not unusual in elections held in Iran. Everything before, during and after Election Day is not completely clear. This is “part and parcel of a lack of political parties or groups with a large social base and lack of an established process for candidate selection,” said Farideh Farhi, an independent scholar and an affiliate of the political science faculty at the University of Hawaii at Manoa, to the Foreign Policy Association. “In every election, new mechanisms and processes are invented or improvised as potential candidates jockey to establish their viability or ability to attract votes.” In such a process, everything goes to the last couple of months ahead of the election day. In the 2009 presidential election, the candidacy of Mir Hossein Mousavi was announced only three months in advance. At the time, however, leading contenders managed to gain support from a highly divided society which was willing to participate in the election.

The amount of uncertainty among candidates, political circles and voters in Iran’s 11th presidential election has been particularly high: Prominent figures such as  secretary of the Supreme National Security Council Saeed Jalili, Mahmoud Ahmadinejad’s ally Esfandiar Rahim Mashaei, and former president Akbar Hashemi Rafsanjani all threw their hats in the ring in the last minutes of the registration process.

Fundamentalist main political parties like the Assembly of Qom Seminary Teachers and the Combatant Clergy Association haven’t decided on their preferred office-seeker even now — almost 10 days after the qualified candidates were announced. The reformist camp is still divided over former First Vice President Mohammad Reza Aref and former Secretary of the Supreme National Security Council Hassan Rouhani. On the other hand, some polls have revealed that “more than 60% of voters still haven’t decided whom they want to vote for.” According to the official number announced by the Ministry of Interior, there are more than 50 million eligible voters in a population of about 76 million.

So only two weeks ahead of Election Day, the number of undecided voters is more than 30 million. The current presidential election depicts the defectiveness of and vulnerability of the dynamics of Iran’s domestic politics.

The 2009 presidential election was followed by the arrests of several reformist journalists and political activists, many of them still in prison after receiving long-term prison sentences. Political activities were banned in universities and restrictions on activist students were highly intensified. Nearly five months ahead of the June 2013 election, 14 journalists from reformist newspapers and websites were detained, which was considered the most aggressive crackdown on independent media since 2009.

The atmosphere of despair in Iran over the election appeared to have changed when Hashemi Rafsanjani appeared at the Ministry of Interior to register his name as a candidate. The decision delighted many people and heated up political debates. However, the wave hushed as soon as Hashemi Rafsanjani was rejected by the Guardian Council vetting.

A reformist journalist who works for the Bahar newspaper told Al-Monitor, “Many of my friends and I had decided not to participate in any upcoming elections but we changed our minds as Rafsanjani joined the presidential contest. Everybody was happy and hopeful [because we felt] he has enough ability to lead the country out of crisis. Now that he has been ousted by the system, we are going to boycott the election again”.

The remaining candidates are trying to heat up their presence on TV and radio; however, the large number of the undecided voters shows the candidates have failed to win the hearts of ordinary people at large. Candidates have the right to use state-run TV and radio (IRIB) for their presidential election campaigns. In total, each candidate will be given seven hours on TV and four hours on the radio. The presidential candidates will also have a 30-minute direct talk to viewers.

One of the eight final candidates, Tehran Mayor Mohammad Bagher Ghalibaf, assigned his campaign affiliates in several provinces early last year, held unofficial meetings with campaign members and started to organize his campaign offices in Tehran and other large cities before the announcement of approved candidates. His first offices opened in Tehran immediately after legal campaigns began on May 25. Not surprisingly, the first posters to appear on the streets were Ghalibaf’s. Other candidates have not yet been able to completely set up their campaign offices in Tehran and other cities.

Ghalibaf and former IRGC commander Mohsen Rezaei launched their visiting tours to larger cities before other candidates. Others have preferred to focus on Tehran or visit nearby cities such as Qom.

While most of the candidates are focusing on public TV and radio shows and group debates, newspapers are under pressure not to cross the so-called “red lines.” Many websites are banned, and the universities are scheduled to start summer holidays earlier. Under these circumstances debates continue on the Internet and social media, but public discussions and gatherings on the streets witnessed in the previous presidential election are missing.

Meanwhile, very few posters are seen on campaign boards and walls. The cold atmosphere of despair still continues to dominate the streets of Tehran only couple of weeks ahead of Election Day.

Mani Fardad is a pseudonym for a reporter covering the elections in Iran.