Will the fate of Israeli President Shimon Peres' vision of peace be any different from that of the Israeli electric car, which shattered in a resounding crash? 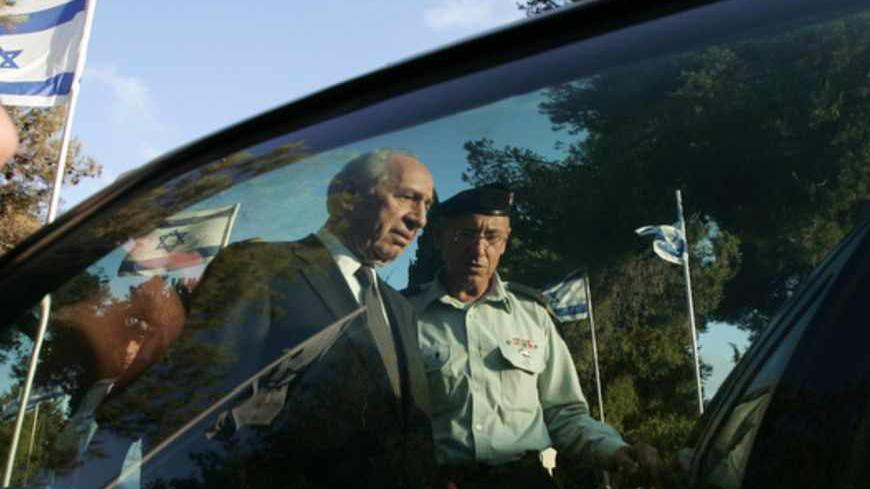 At a brief news conference with Israeli reporters who came to cover the annual meeting of the World Economic Forum at the end of last week (May 24-26) in Jordan, I asked Israeli President Shimon Peres whether the Palestinian demand that negotiations on a permanent Israeli-Palestinian arrangement be based on the 1967 border was reasonable, in his view.

“The main thing is to enter negotiations,” he said, avoiding the question in his typical light fashion.

But Israeli Prime Minister Benjamin "Bibi" Netanyahu stubbornly rejects this ultimate Palestinian demand. I know that behind closed doors, Peres expresses his frustration with Bibi’s position. The president knows that the prime minister rejected a proposal by Palestinian President Mahmoud Abbas to launch a secret Israeli-Palestinian negotiating channel for a short trial period, with no preconditions. Such a channel would have enabled Netanyahu to freeze construction in the settlements without getting tied up in an official announcement of a freeze which would have rattled his coalition government. Peres is also frustrated with the fact that Netanyahu rejected his request to allow a foreign businessman to invest in an impressive Palestinian initiative in Area C. The area constitutes 60% of the West Bank territory and has already been under full “temporary” Israeli control for 20 years.

As might have been expected, when speaking into the many microphones placed before him, Peres chose his words carefully. At the age of 90 he still manages to maneuver with amazing agility. He did the same thing in answering a different question at the news conference, a somewhat vicious one, at that: “Will your vision of peace end up in the same way as the electric-car initiative, Better Place?” he was asked. Peres pulled an evasive answer out of his sleeve. He explained that the vision of a battery-run car was sound, and it remains so, and that the failure of Better Place resulted solely from management problems.

With all due respect — and I have great respect for Peres — he is mistaken and misleading. The most talented management could not have saved Better Place from bankruptcy. We’ll come back to that later.

A brief reminder: In January 2008, at a news conference with the entrepreneur of the electric-car project, Shai Agassi, and Carlos Ghosn, president of Renault-Nissan, which was to manufacture and market the electric car, Peres said that the new initiative was “a solution for peace” “to the problem of the oil-spreading pollution in the universe.” The president estimated that the project would contribute to peace by creating up to 50 thousand new jobs, which may employ, among others, Palestinian workers. In December 2009 Peres was photographed behind the wheel of an electric car at a battery-charging station in Copenhagen and declared: “Two years ago, we talked about the vision, and here we are turning a dream into reality at great speed.”

Peres managed to infect many in the media with his admiration for Agassi and his car. And not just Peres. In July 2008, columnist Thomas Friedman wrote in the New York Times that “If you cross-bred [late American industrialist] Henry Ford and [late Israeli prime minister] Yitzhak Rabin … you’d get Shai Agassi.” In 2009 Agassi made it to the Time Magazine list of the world’s 100 most influential people. The Economist predicted that he would “teach the world how not to use oil.” In 2010, the pundit and subsequent editor of Israeli daily Haaretz, Aluf Ben, wrote that in the year 2020 Agassi would run for prime minister.

“Agassi is the contemporary expression of the vision of science and development presented by [Israel's first] prime minister David Ben-Gurion,” Ben wrote.

Another prime minister, Ehud Olmert, also got caught up in the magic of Agassi and his car, promoting a green-car tax break. The previous Netanyahu government gave the break final approval. Last week on May 26, the electric car reached a dead end. Agassi and investor Idan Ofer, former chairman of the Israel Corporation, locked the gates of the plant, leaving behind a debt of $40 million to a large group of creditors.

Better Place’s tragic end is a story about what happens when clouds of vision conceal the skies of reality. It typifies the modus operandi of one of the most influential people in the Middle East for the past half century, Shimon Peres. The evolution of the made-in-Israel electric car embodies the serpentine peace-process road between Jerusalem, Ramallah and Washington. The gap between the vision of the electric car and the reality on the road is similar to the gap between Netanyahu’s two-state Bar-Ilan declaration of June 2009 and the May 2013 reality of occupation.

“There isn’t a single serious car manufacturer who treats battery-powered cars as a matter worthy of time and resources,” wrote my colleague B. Michael, an automotive expert, in Israeli daily Yedioth Ahronot in January 2007. He noted at the time that a company named Evin, LLC had already been working for 15 years in the US to advance a charging infrastructure for an electric car, but it hadn’t taken off. Michael also promised to eat his hat “without salt” if even one percent of Agassi’s forecast materializes — for 100,000 electric cars to be traveling Israel’s roads by the end of 2010.

The connection with Peres provided Agassi with his breakthrough, after Peres introduced him to Ghosn during the World Economic Forum summit in Davos in 2007. The conference that took place on the Jordanian shore of the Dead Sea last week is a Middle Eastern replica of the Davos summit, but as he does every year at the conference in Switzerland, Peres served as Netanyahu’s information minister.

Just like the sad story of Better Place, Peres is selling the world a vision of peace and cooperation, while a right-wing government in Jerusalem nurtures the settlement enterprise. From one conference to the next, the despair keeps growing in what’s left of the Palestinian peace camp. From peace speech to vision speech, hope is also fading in what’s left of the Israeli peace camp. If Peres didn’t exist, Bibi would have invented him. I wish Peres many more long years, even when Better Place is followed by a Worse Place.