Saudi-Qatar Honeymoon In Lebanon Is Over

Seemingly eager to turn the regional unrest to their advantage, both Qatar and Saudi Arabia are carefully strategizing their diplomatic efforts in the Mideast. 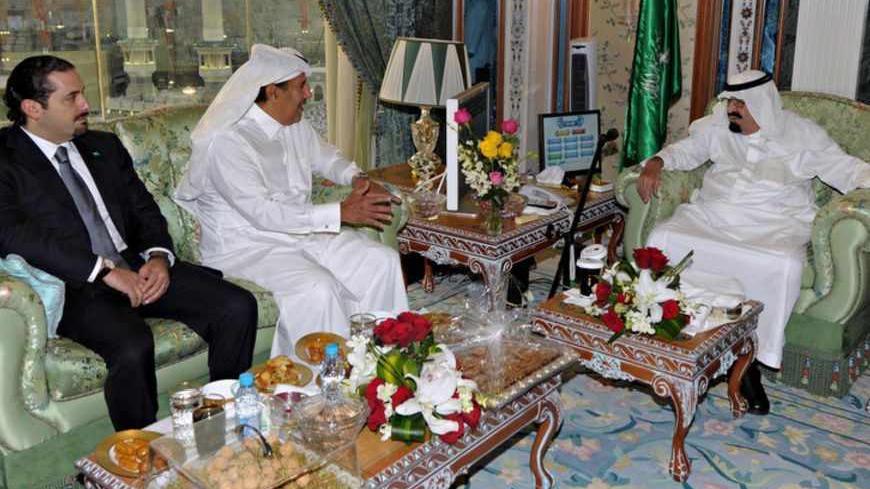 The silent conflict raging between Qatar and Saudi Arabia currently revolves around two main axes. The first is their respective positions vis-à-vis the Muslim Brotherhood, and their disagreement as to whether to back or reject its ascent to power in Syria. The second concerns Saudi Arabia’s objection to the disproportionate — relative to its size — Qatari role in the region, while the latter insists on allowing its role to play out.

According to sources knowledgeable in internal Saudi affairs, Riyadh considers its dispute with Qatar — subsequent to the latter’s support for the Syrian Muslim Brotherhood reaching power — as a dispute with strategic overtones. Lately, specifically after the naming of Tammam Salam as prime minister-designate to form a new Lebanese government, the alliance between Doha and Riyadh in managing the Lebanese arena has shown signs of disintegrating. The last time the two countries were in accord over Lebanon was when [former Lebanese] Prime Minister Saad Hariri visited Qatar last summer, and later appeared in a photograph with Qatari Prime Minister Sheikh Hamad bin Jassim when both visited Saudi King Abdullah bin Abdulaziz.

The Syrian crisis was responsible for restoring harmony between Qatar and Saudi Arabia in Lebanon; throughout the preceding period, between 2006 and 2011, Qatar had taken the side in Lebanon of the March 8 alliance backed by Damascus and Iran, while Saudi Arabia stood with the March 14 coalition, whose main Sunni constituent (the Future Movement) is a Saudi protégé. The reasons that drove Qatar to espouse its aforementioned position remain unknown to this day; but some in Hezbollah think that Doha’s bias toward the Iranian-Syrian axis in Lebanon was not genuine, but was merely a political role assigned by Washington on Qatar — the location of the largest American military base in the Arab Gulf. The Saudis, on the other hand, thought at the time that Qatar suffered from an “inferiority complex” that drove it to try and emulate the role and influence of Saudi Arabia in the region and the world.

During that period, the Qataris often reiterated that the smaller Arab nations had a problem with their larger neighbors who tried to limit their political aspirations. The proponents of this view long expressed pride that small nations — such as Lebanon, Kuwait and Qatar — succeeded in creating political, economic, media and democratic models that made up for their small geographic and demographic sizes, while proving they were worthy of overcoming their subservience to larger Arab countries such as Saudi Arabia, Egypt and Syria, and playing a prominent role in leading the region.

During the Syrian crisis and before, even when Hezbollah and its allies ousted Saad Hariri from the Lebanese premiership, the political divergence between Qatar and Saudi Arabia in Lebanon lost its raison d'être, and they both re-adopted the traditional Gulf policy of concentrating on weakening Iranian influence in the Orient. Doha and Riyadh therefore switched to an offensive policy, through publicly supporting the Syrian opposition bent on toppling Bashar al-Assad’s Iranian-allied regime, and by extension, weakening Iran’s Lebanese allies, led by Hezbollah.

In its internal discussions, Hezbollah affirms that Qatari funding stands behind the rise of Sheikh Ahmad al-Assir, who came to prominence in the last two years by challenging and criticizing Hezbollah from his Bilal bin Rabah mosque in Sidon. Hezbollah’s information also indicates that Saudi Arabia is funding Salafist factions in Lebanon that profess animosity towards the party.

Yet, it’s been obvious lately that the honeymoon between Riyadh and Doha in Lebanon is ending. The main point of contention between them this time is the issue of support for the Muslim Brotherhood in Syria. While Qatar and Turkey are planning to make the Brotherhood the spearhead of their future influence in Syria following Assad’s ouster, Riyadh, on the other hand, backs the advent to power of moderate Sunni factions, most of which are comprised of Syrian Army defectors and other figures who don’t belong to Islamist movements. From Riyadh’s perspective, its disagreement with Qatar about the Brotherhood is a strategic one. For Saudi Arabia is wary of the ties between the Muslim Brotherhood and the Islamist Sahwa movement in Saudi Arabia, which today represents the main internal opposition to the Saudi ruling family. Riyadh wants Qatar to abandon its plan to back the Muslim Brotherhood because it would become a source of strength for the Saudi Sahwa movement if it were to attain power in Syria.

Riyadh is therefore developing a new policy in Lebanon, and has begun opening up to all Lebanese political powers, including Iran’s ally Hezbollah and the Christian Free Patriotic Movement, which belongs to the Iranian-Syrian axis of resistance. Saudi Arabia is also bolstering its influence on Sunni Lebanese factions, in order to minimize Qatari influence over them. There are indications that Riyadh has succeeded in dispelling Qatar’s role in Lebanon, as evidenced by the lack of visits by Lebanese officials to Doha recently, and the resurgence of visits to Saudi Arabia instead. Furthermore, Sheikh Assir’s vitriolic Qatari-influenced verbal attacks on Hezbollah have ceased lately.

Qatar’s role in the region is the subject of behind-the-scenes attacks by factions close to Saudi Arabia in Lebanon, and talk about it being a country that is trying to fight above its weight class has risen to prominence once again. All of this points to Saudi Arabia having decided to excise Qatar from the Lebanese as well as the Eastern scenes. This is all part of a comprehensive Saudi agenda to strike at the Muslim Brotherhood and weaken the influence of the countries that support it in sensitive areas of the Arab and Muslim worlds.