Following a call by PKK leader Abdullah Ocalan from prison on Imrali island, members of the party have begun to move from Turkey into the Iraqi Kurdistan Region. 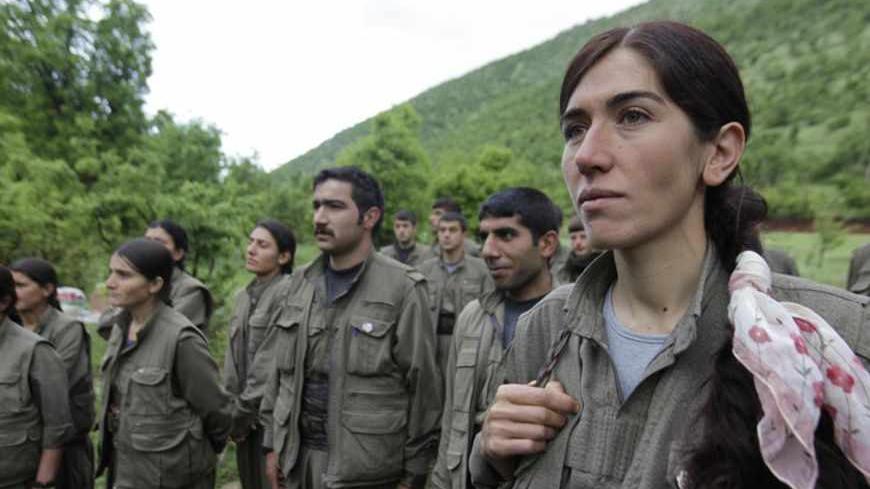 After a weeklong journey on foot, the first group of members of the Kurdistan Workers’ Party (PKK) heading toward the Iraqi-Turkish border arrived early today [May 14], and entered the Kurdistan region of Iraq through the border town of Harur in the province of Dohuk. The PKK members went in response to the call of their leader, Abdullah Ocalan, who is serving a life sentence in the Turkish Imrali prison, following a peace process between the Turkish government and Ocalan, raising the ire of the Iraqi government.

This group comprising nine men and six women is the first to withdraw from Turkey and head to Iraq in response to the call of Ocalan to retreat from the Turkey. Upon the group’s arrival, an official welcoming ceremony was held by their fellow PKK members who are based, with their leadership, in the Iraqi Kurdistan region.

The PKK was founded on Nov. 27, 1978, at which time Ocalan was designated the party’s leader. The PKK has a Marxist-Leninist orientation and one of its fundamental goals is to establish a greater independent Kurdish state. In 1948, the military activity of the party started within [historical] Kurdistan and Ocalan was arrested on Feb. 15, 1999, after 15 years of armed military operations. Ocalan was sentenced to death in June of the same year.

In tandem with the arrival of the first PKK members to the Iraqi Kurdistan region, the Iraqi government made haste on Tuesday, May 14, to look into the developments of the agreement concluded between the Turkish government and the Kurdish opposition represented by the PKK. Even though the Iraqi government reiterated its support to peacefully resolving the problems that the region is enduring, it stressed its refusal of achieving peaceful solutions at the expense of Iraq and its sovereignty.

The Iraqi government considered the withdrawal of the PKK militants and their arrival into the Iraqi lands as a flagrant violation of the sovereignty and independence of Iraq, noting that this move would severely damage the bilateral relationship and common interests of both countries.

According to a media statement issued by the cabinet, the latter decided to assign the Ministry of Foreign Affairs the task of informing Turkey that Iraq ultimately refuses the accession of militants and non-militants to the Iraqi lands and the adoption of any arrangement that concerns Iraq without referring to the state. Iraq will file a complaint to the UN Security Council [calling upon it] to practice its mission of preserving international peace and security and to take a decision to condemn the violations against the Iraqi sovereignty.

Despite that the PKK does not recognize the borders separating the Kurdish-inhabited areas in Iraq, Turkey, Syria and Iran, the leaderships affirmed that it coordinated with both the [Baghdad] federal and Kurdish governments prior to the withdrawal toward the Kurdistan region on May 8.

Ahmad Denise, head of foreign relations of the PKK’s political wing, told Al-Monitor that “countries in the region must understand that finding peaceful solutions to the issue implies stability and poses no risks to any country.”

The withdrawal of PKK members to the border towns located between the Iraqi Kurdistan region and Turkey came after the call of Ocalan, who is serving a life sentence in the Turkish Imrali prison, to his militants on March 21, the day of the Kurdish New Year holiday of Nowruz.

As a first reaction to the PKK withdrawal, the Ministry of Peshmerga Affairs in the KRG declared that it supports finding peaceful solutions to the Kurdish issue in Turkey, a stance that was repeatedly announced by Kurdish officials and leaderships in the Iraqi Kurdistan region.

The Ministry of Peshmerga Affairs stressed in a statement issued in Kurdish on May 14 that “the presence of PKK militants in the border areas between Iraq, Turkey and Iran was never approved by these countries, noting that these areas have never been under the security control of the said countries, including the Iraqi region of Kurdistan.

It would seem that the PKK leadership does not want to simply lose its militants. Despite the decision to withdraw from Turkey to the Iraqi Kurdistan Region, it will maintain its political and military training programs.

It is worth noting that the PKK has two leaderships, the first being located in the Qandil Mountains — seen as a Turkey-Iraq-Iran border tripoint — and the second in al-Zab, north of Dohuk, a town adjacent to the Iraqi-Turkish borders.

Rohat, the nickname of a leading member of the PKK who was among the leading figures receiving the first militants in Kurdistan on May 14, said to Al-Monitor, “Those militants, once the complete withdrawal is carried out, will maintain their military training and will be ready to fulfill any assigned task.”

Clearly, the PKK leadership does not yet trust what Turkey is doing in regard to granting them the constitutional rights they are asking for as a sign of good will.

“We did a lot for the sake of consolidating the peace process and we are waiting for Turkey to amend the constitution and grant the Kurds their rights,” Rohat added.

It is also worth noting that the PKK is calling for broader constitutional rights for Kurds in Turkey — such as recognition of the Kurdish language as the second official language, and autonomy — before laying down arms, particularly given that the Kurds represent 20% of Turkey’s 75 million citizens.