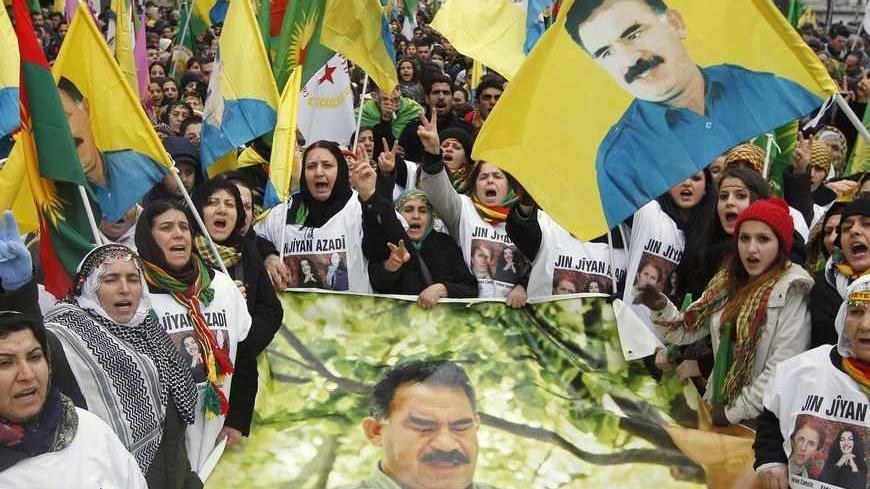 Following the implementation of the ongoing peace process in Turkey, along with the arrival of the first members of the Kurdistan Workers Party (PKK) to the Iraqi Kurdistan Region on May 14, Kurds in Iraq have begun to pressure Turkey to release PKK leader Abdullah Ocalan, who is serving a life sentence in the Turkish Imrali prison. Iraqi Kurds have launched a campaign to collect 5 million signatures (currently there are 60,000) and submit them to the Office of the High Commissioner for Human Rights (OHCHR) in Europe.

During recent years, the Iraqi Kurdistan region has witnessed numerous similar campaigns, but none of them gained the support of Kurdistan Regional Government (KRG) of Iraq and of Kurdish political leaders, except for this campaign, which was signed on to by high-level figures in the KRG and its parliament.

The most prominent signatories of this campaign are KRG Prime Minister Nechirvan Barzani — who is also vice-president of the Kurdistan Democratic Party (KDP) headed by Iraqi Kurdistan President Massoud Barzani — as well as the president of the KRG parliament, Arslan Baez, a senior leader in the Patriotic Union of Kurdistan (PUK) headed by Iraqi President Jalal Talabani. Furthermore, 90 MPs from the KRG parliament and a number of provincial government ministers signed the petition.

Ocalan is considered the leader of the PKK’s military wing — the People's Defense Force (HPG) — and is known as “Apo” to his followers. Apo  means “uncle” in Kurdish.

Turkish authorities incarcerated Ocalan on Feb. 15, 1999, after he was arrested in Kenya following a joint operation between the US Central Intelligence Agency (CIA), the Turkish National Intelligence Organization (MIT) and the Israeli Mossad.

Ocalan has been held in solitary confinement on Imrali Island in the Sea of Marmara in Turkey since his arrest. Although he was originally sentenced to death, the sentence was commuted to life imprisonment when Turkey conditionally abolished the death penalty in August 2002.

The PKK is a militant left-wing Kurdish political party with a Marxist-Leninist and Kurdish nationalist ideology. The party’s original objective was to establish an independent state of Kurdistan — as the party calls it — but then its objective transformed to the establishment of autonomous Kurdish-majority areas in Turkey. The party, which was established in the 1970s, quickly turned into a militant group led by Ocalan when the southeast region of Turkey was transformed into a war zone in the 1980s and 1990s.

In a statement to Al-Monitor, Shirzad Hassan, a member of the campaign committee trying to gather the 5 million signatures, said, “This [campaign] aims at exerting pressure on Turkey through the EU countries to release Ocalan, since we know that European countries show great respect for human rights issues.”

He continued, “Our objective is to collect 5 million signatures to urge the release of Ocalan. The campaign was launched in Iraq, the Iraqi Kurdistan Region, and European countries that have a Kurdish population — with the exception of Turkey, which does not allow this [campaign] despite the fact that its Kurdish population is estimated at around 20 million.”

Hassan, asserting that this campaign is “an important step” toward Ocalan's release, indicated that it drew the attention of the KRG president, the speaker of the parliament, many MPs, political leaders, independent political figures as well as a large group of intellectuals and civil society organizations.

Hassan confirmed that the signatures “will be delivered to the OHCHR in Europe to exert pressure on the Turkish government.”

After 14 years of imprisonment, in March 2013, Ocalan called upon his party members from behind bars to cease armed operations against the Turkish government and for PKK fighters to withdraw to the Iraqi Kurdistan Region, paving the way for the signing of a peace agreement ending Kurdish military action in the country.

Furthermore, Huker Jeto, a human and civil rights activist, indicated that any civil activity related to finding ways to put pressure on the Turkish government for releasing Ocalan will promote the ongoing peace process in Turkey.

Jeto told Al-Monitor: “Ocalan and Kurdish issues in Turkey have always been a subject of interest for European countries, which have called on Turkey to settle them. I think that pressures exerted through the retained diplomatic means may push Turkey to release Ocalan within the scope of the ongoing peace process”.

Jeto indicated that the United Nations and the European Union are among the international institutions capable of putting pressure on countries in terms of issues related to the promotion of human rights, in particular since the European Commission of Human Rights submits its report to the European Union. The Turkish activist also clarified that the human rights issue is one of the requirements obstructing Turkey's accession to the EU.

It is worth mentioning that Turkey submitted its application for formal membership into the EU on April 14, 1987, but was only officially recognized as a candidate for full membership on Dec. 12, 1999. Moreover, Turkey’s membership application stirred major controversy during the expansion of the European Union.